Posted in Alice in Wonderland 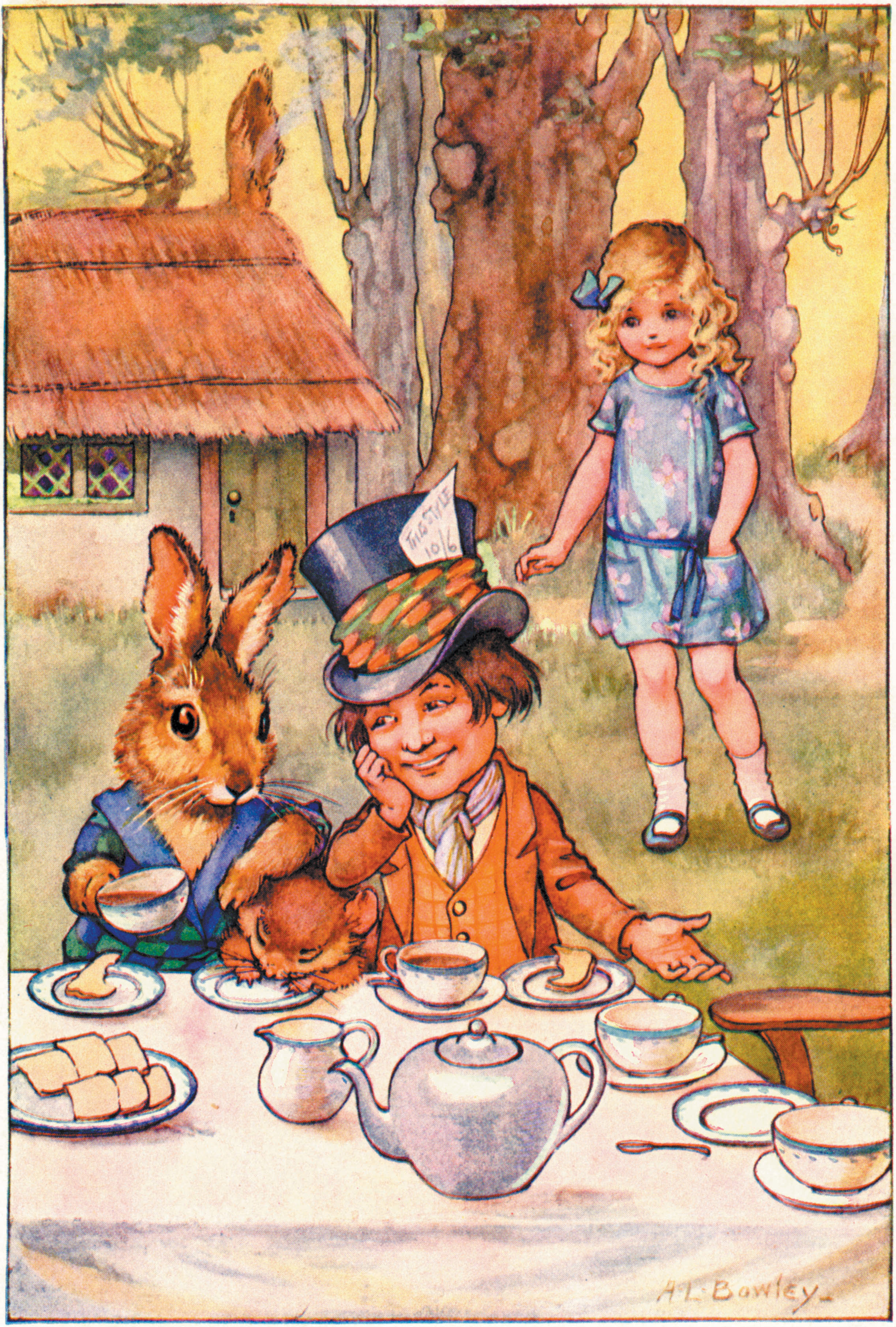 Dormouse was sitting between them, fast asleep, and the other two were using it as a cushion, resting their elbows on it, and talking over its head. ‘Very uncomfortable for the Dormouse,’ thought Alice; ‘only, as it’s asleep, I suppose it doesn’t mind.’ 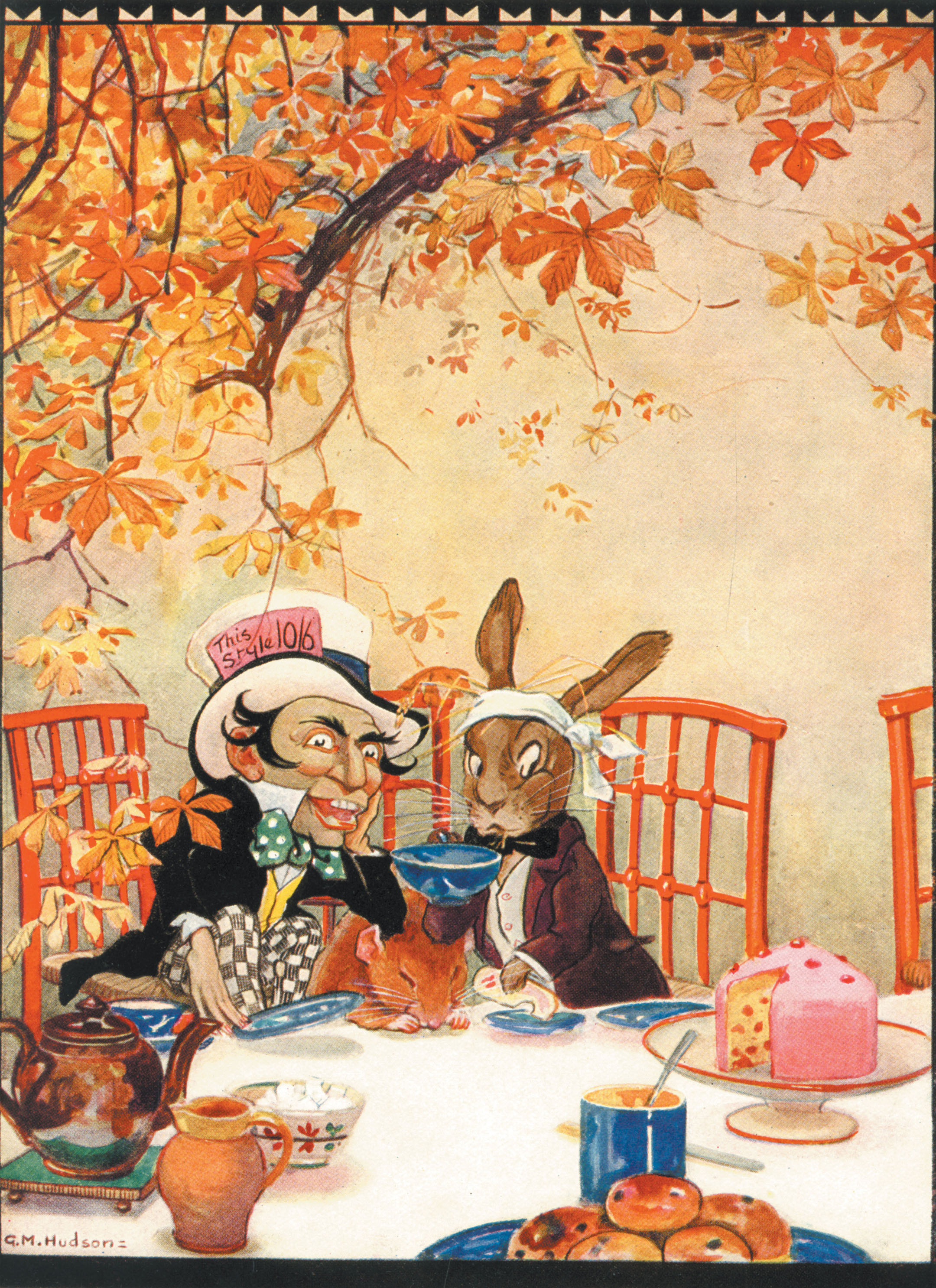 ‘No room! No room!’ they cried out when they saw Alice coming.

‘There’s plenty of room!’ said Alice indignantly, and she sat down in a large arm-chair at one end of the table. 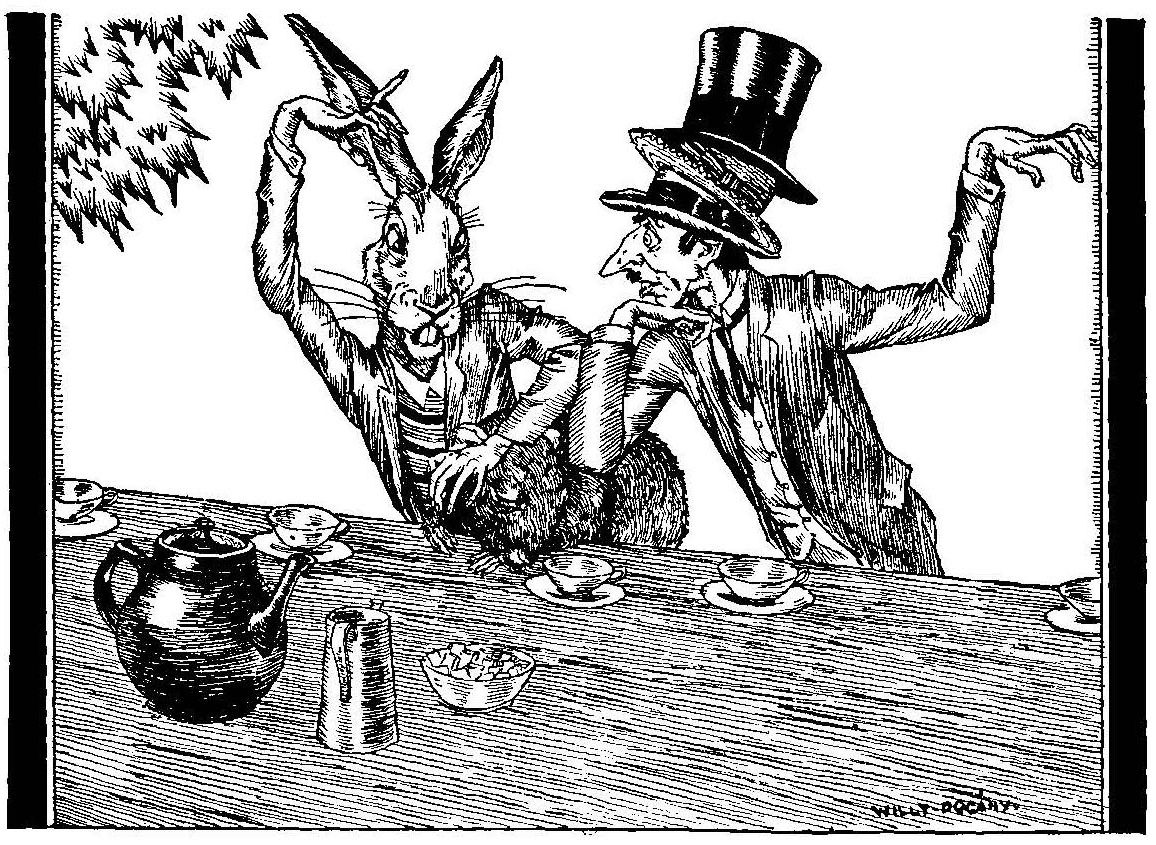 ‘Have some wine,’ the March Hare said in an encouraging tone.

Alice looked all round the table, but there was nothing on it but tea. ‘I don’t see any wine,’ she remarked.

‘There isn’t any,’ said the March Hare. 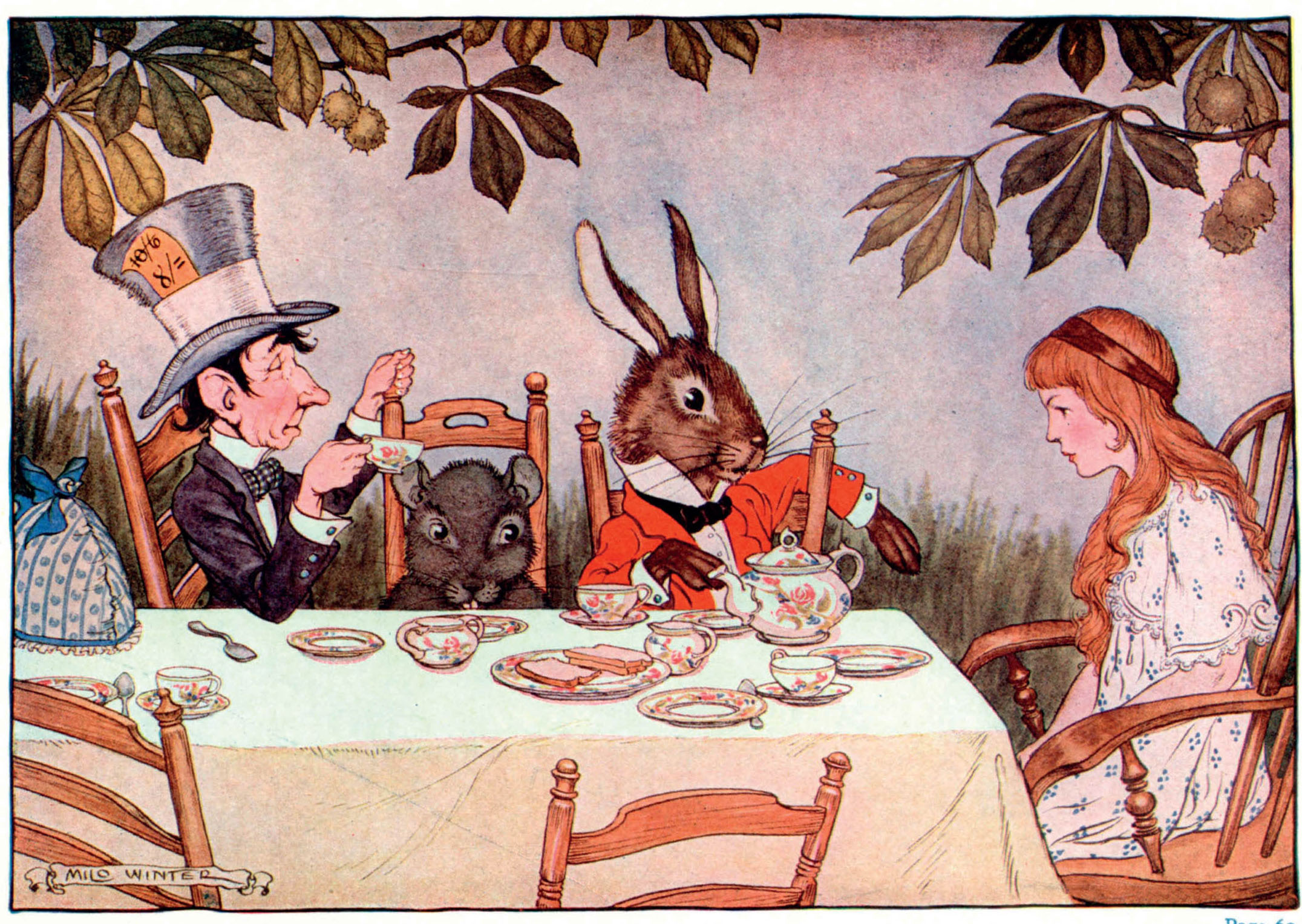 The March Hare took the watch and looked at it gloomily: then he dipped it into his cup of tea, and looked at it again: but he could think of nothing better to say than his first remark, ‘It was the best butter, you know.’

Alice had been looking over his shoulder with some curiosity. ‘What a funny watch!’ she remarked. ‘It tells the day of the month, and doesn’t tell what o’clock it is!’

‘Why should it?’ muttered the Hatter. ‘Does your watch tell you what year it is?’ 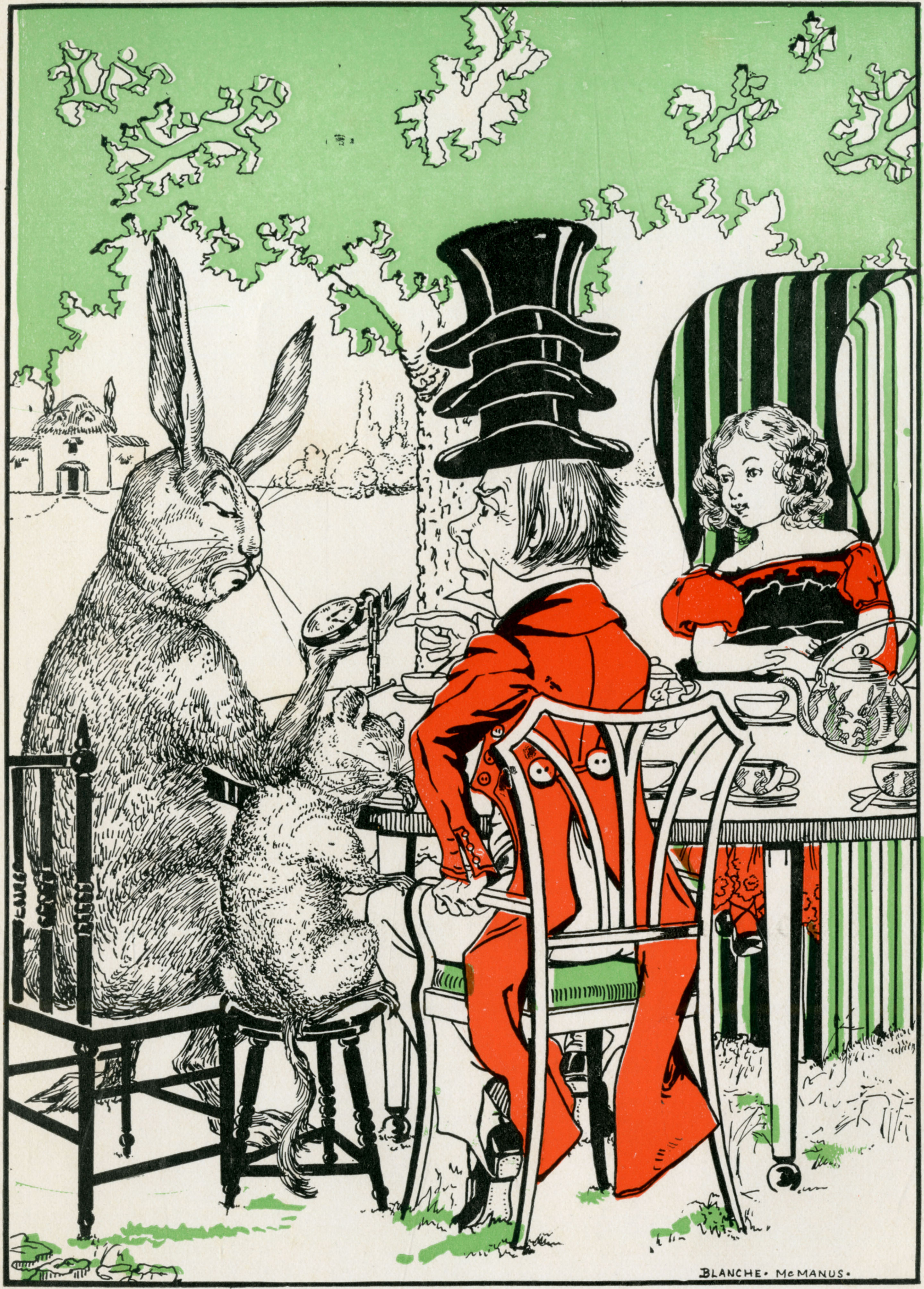 ‘The Dormouse is asleep again,’ said the Hatter, and he poured a little hot tea upon its nose.

The Dormouse shook its head impatiently, and said, without opening its eyes, ‘Of course, of course; just what I was going to remark myself.’ 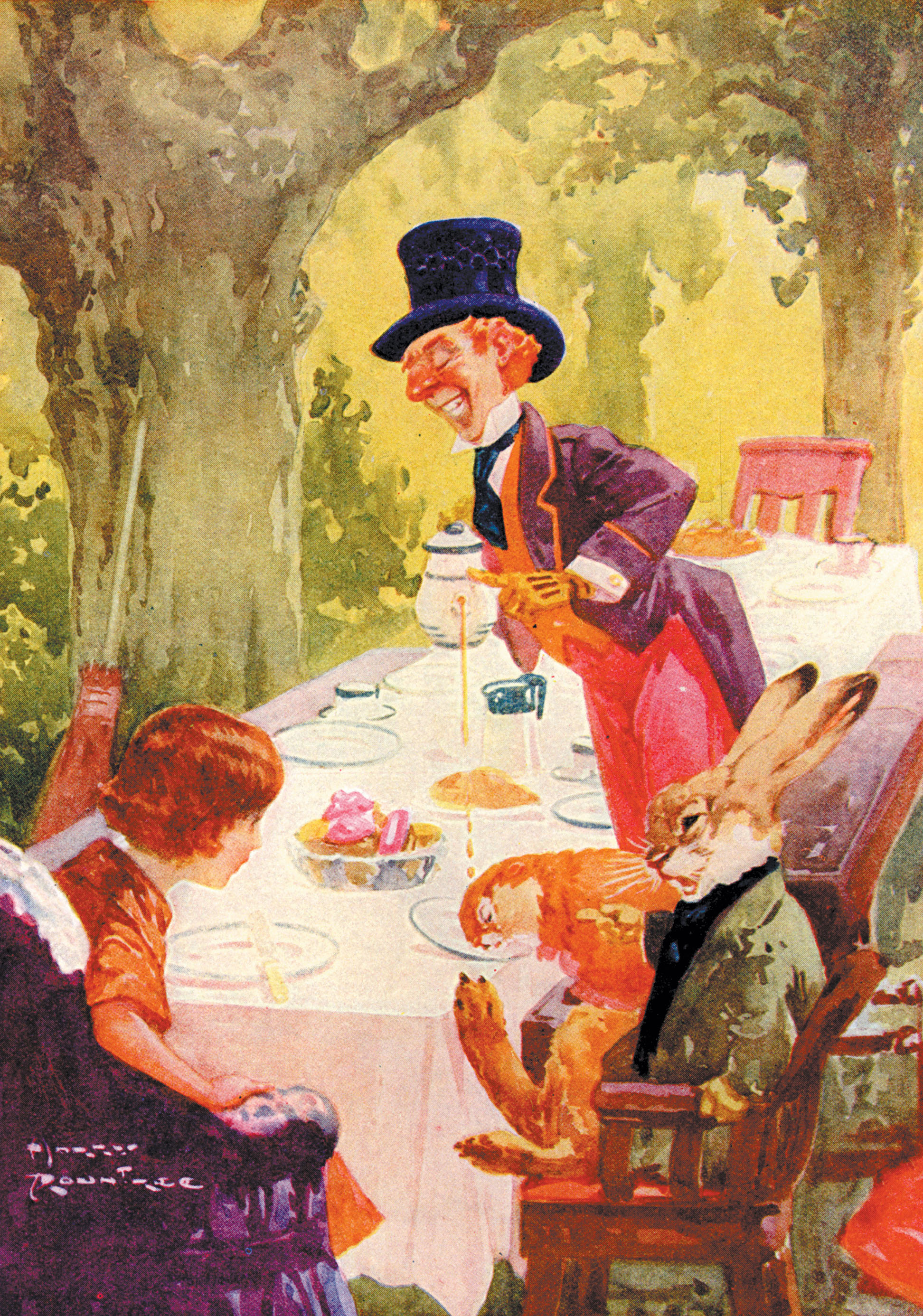 Illustration from Alice’s Adventures in Wonderland – Illustrated by Harry Rountree. This edition was originally published in 1908.

The Hatter shook his head mournfully. ‘Not I!’ he replied. ‘We quarrelled last March—just before he went mad, you know—’ (pointing with his tea spoon at the March Hare,) ‘—it was at the great concert given by the Queen of Hearts, and I had to sing –

How I wonder what you’re at!”

You know the song, perhaps?’” 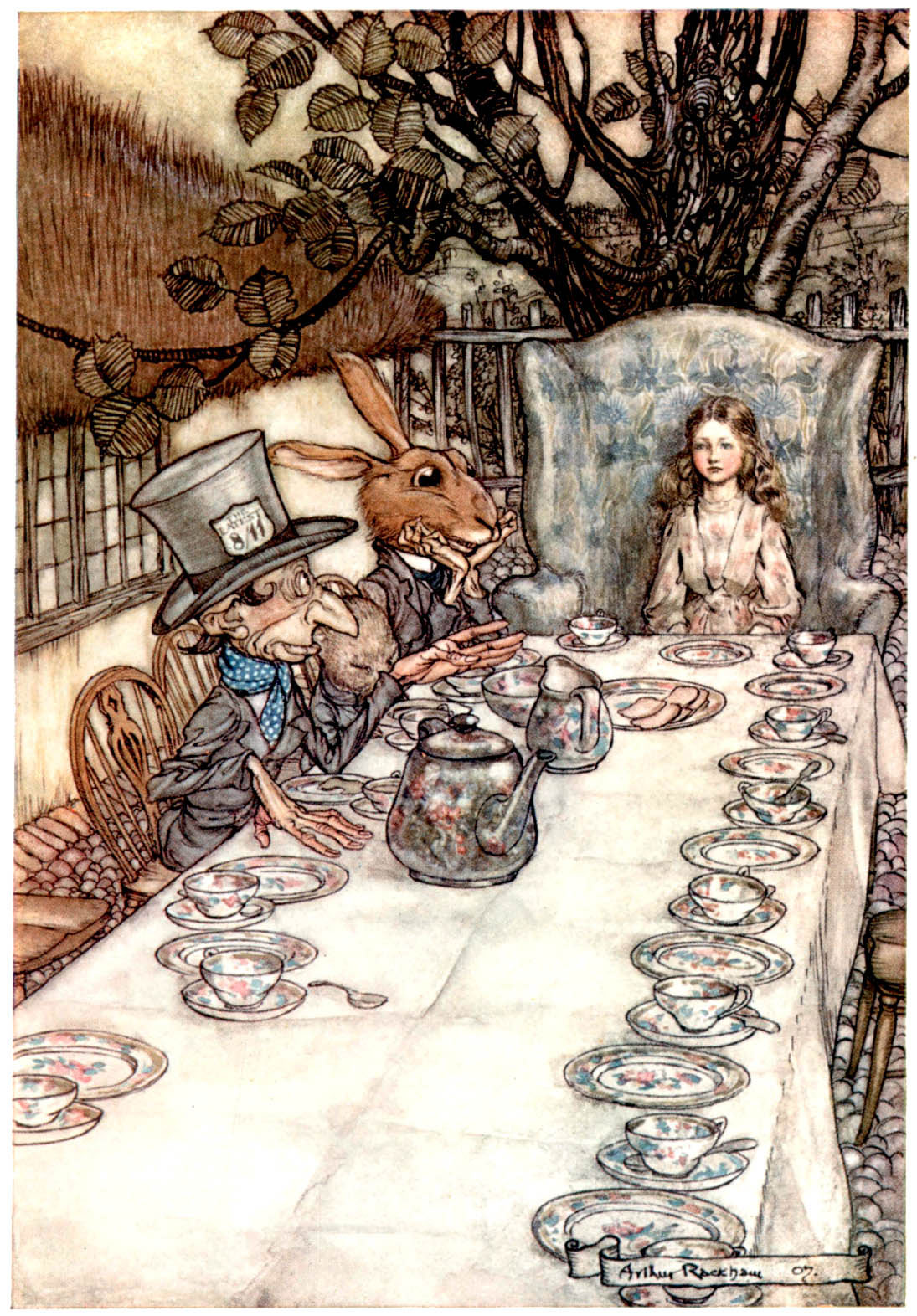 Arthur Rackham‘s illustration of The Mad Tea Party from Alice’s Adventures in Wonderland, 1907.

‘It goes on, you know,’ the Hatter continued, ‘in this way:—

“Up above the world you fly, 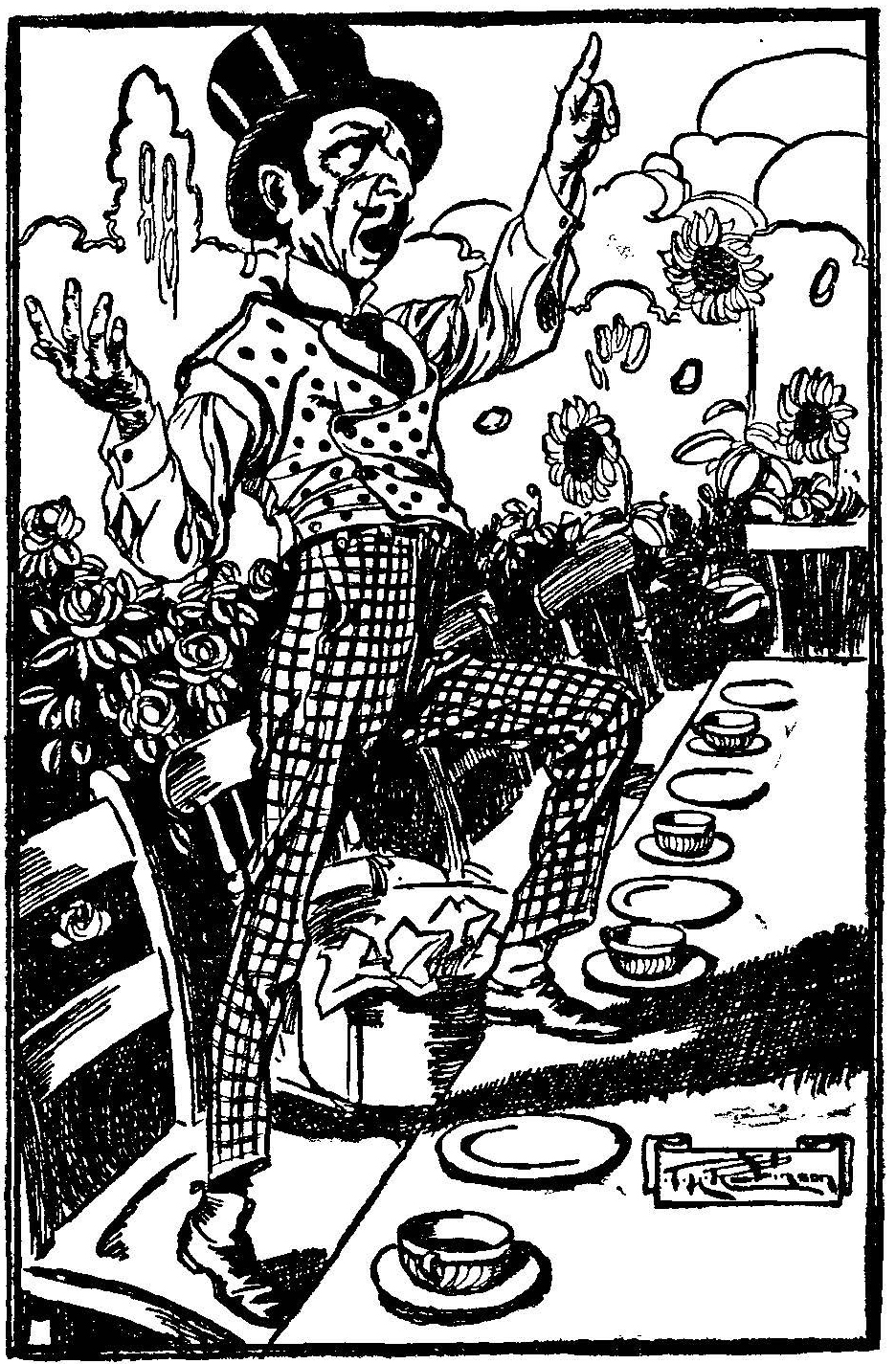 Black and White illustration by T. H. Robinson from Alice’s Adventures in Wonderland published in 1910.

‘Suppose we change the subject,’ the March Hare interrupted, yawning. ‘I’m getting tired of this. I vote the young lady tells us a story.’

‘I’m afraid I don’t know one,’ said Alice, rather alarmed at the proposal. 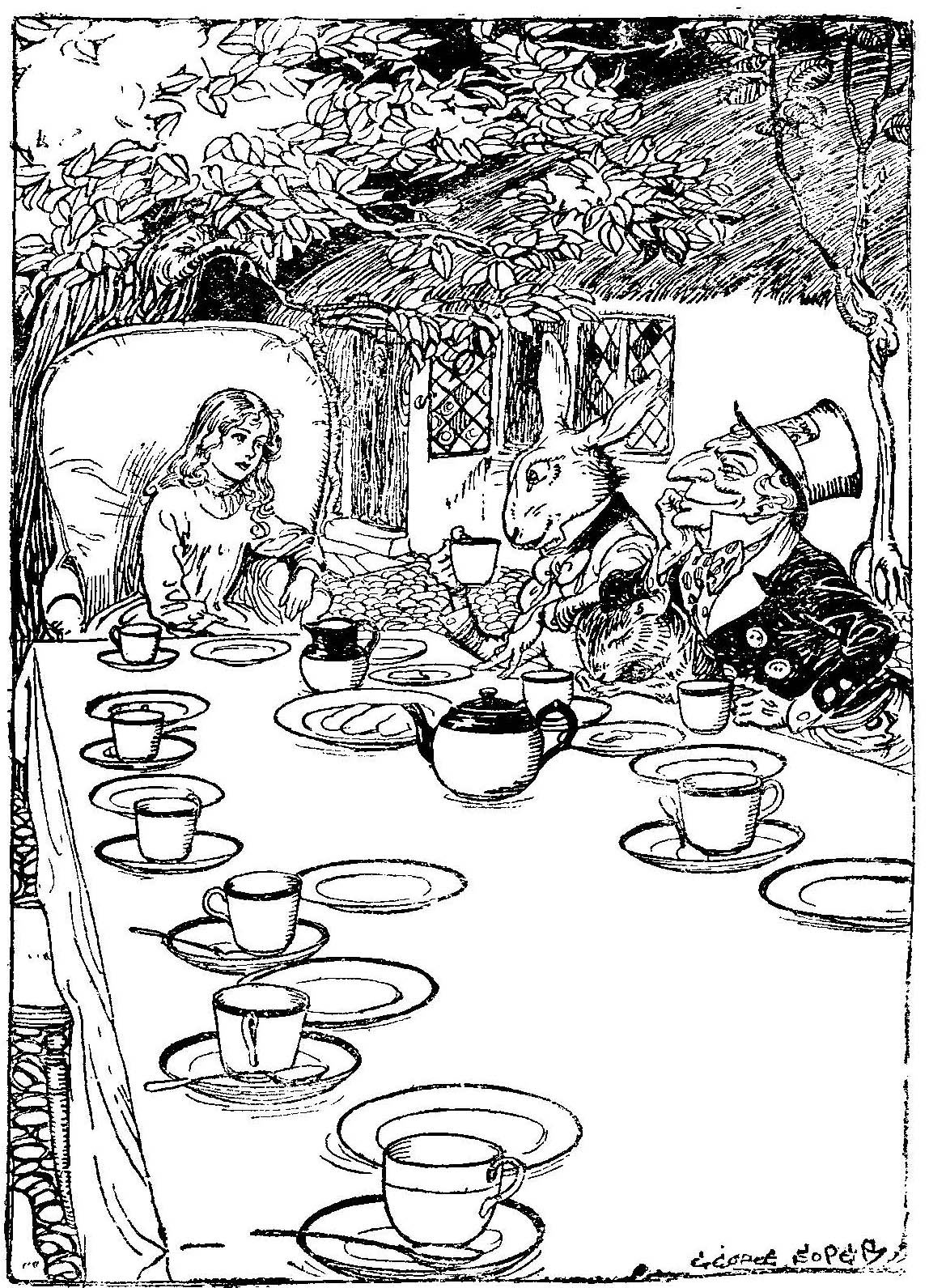 Alice did not quite know what to say to this: so she helped herself to some tea and bread-and-butter, and then turned to the Dormouse, and repeated her question. ‘Why did they live at the bottom of a well?’

The Dormouse again took a minute or two to think about it, and then said, ‘It was a treacle-well.’

‘There’s no such thing!’ Alice was beginning very angrily, but the Hatter and the March Hare went ‘Sh! sh!’ and the Dormouse sulkily remarked, ‘If you can’t be civil, you’d better finish the story for yourself.’ 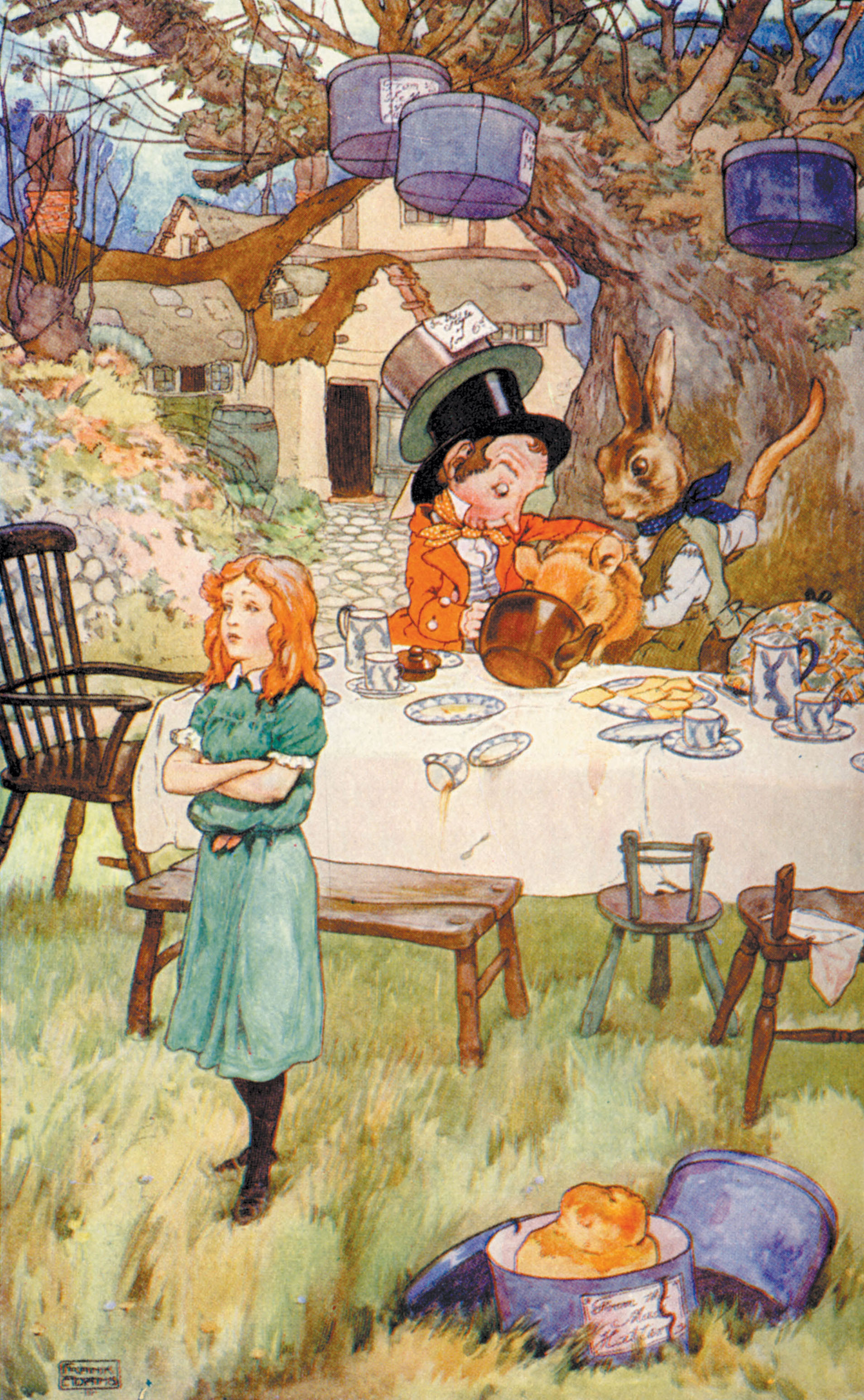 Frank Adam’s illustration of the Mad Hatter and the March hare trying to squeeze the Dormouse into the teapot. Illustration from Alice in Wonderland – Stories New and Old first published in 1912.

Dormouse fell asleep instantly, and neither of the others took the least notice of her going, though she looked back once or twice, half hoping that they would call after her: the last time she saw them, they were trying to put the Dormouse into the teapot.” 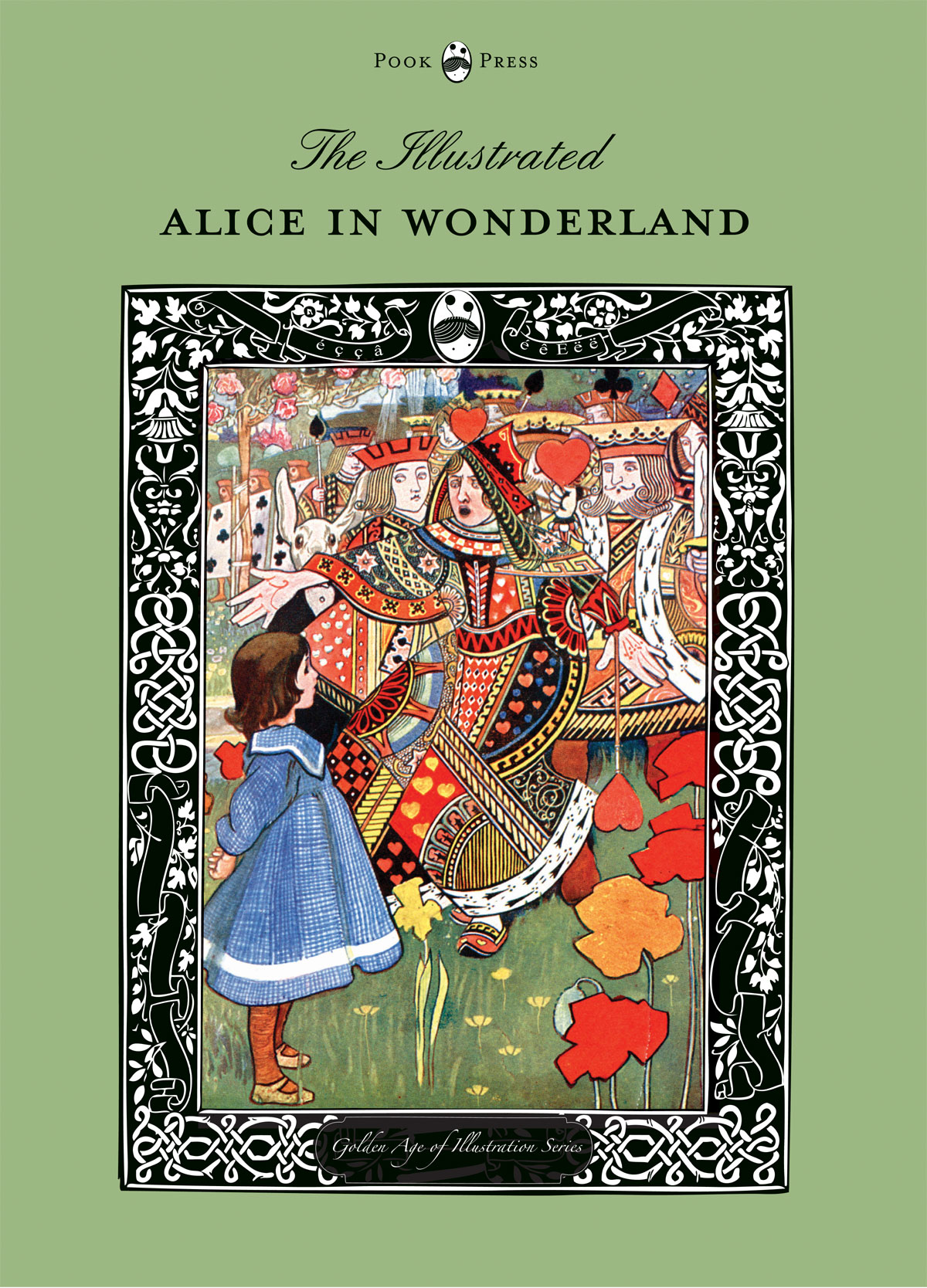 All of this images can be found in our book The Illustrated Alice in Wonderland which we’ve just released as part of the celebration of the 150 year anniversary.