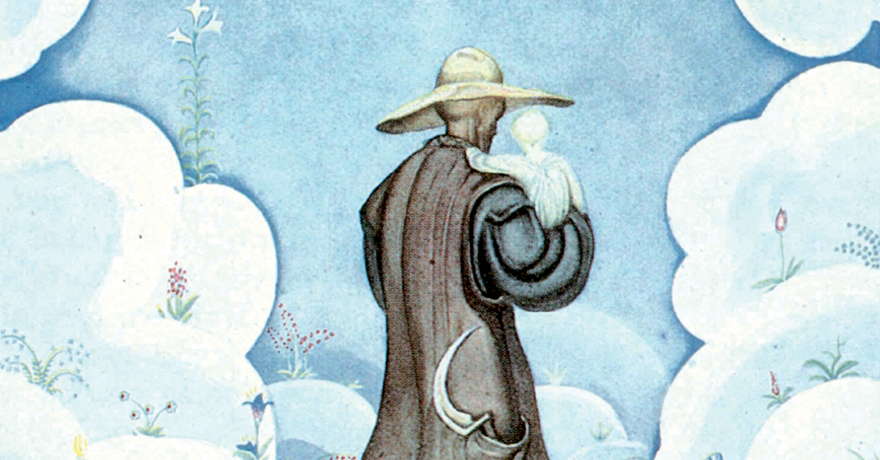 Top 5 Saddest, Darkest and Most Gruesome Tales for Halloween

For this year’s Halloween we’ve picked out 5 of some of the saddest, darkest and most gruesome tales from some of our favourite books written and collected by the likes of The Brothers Grimm, Hans Christian Andersen and Charles Perrault. 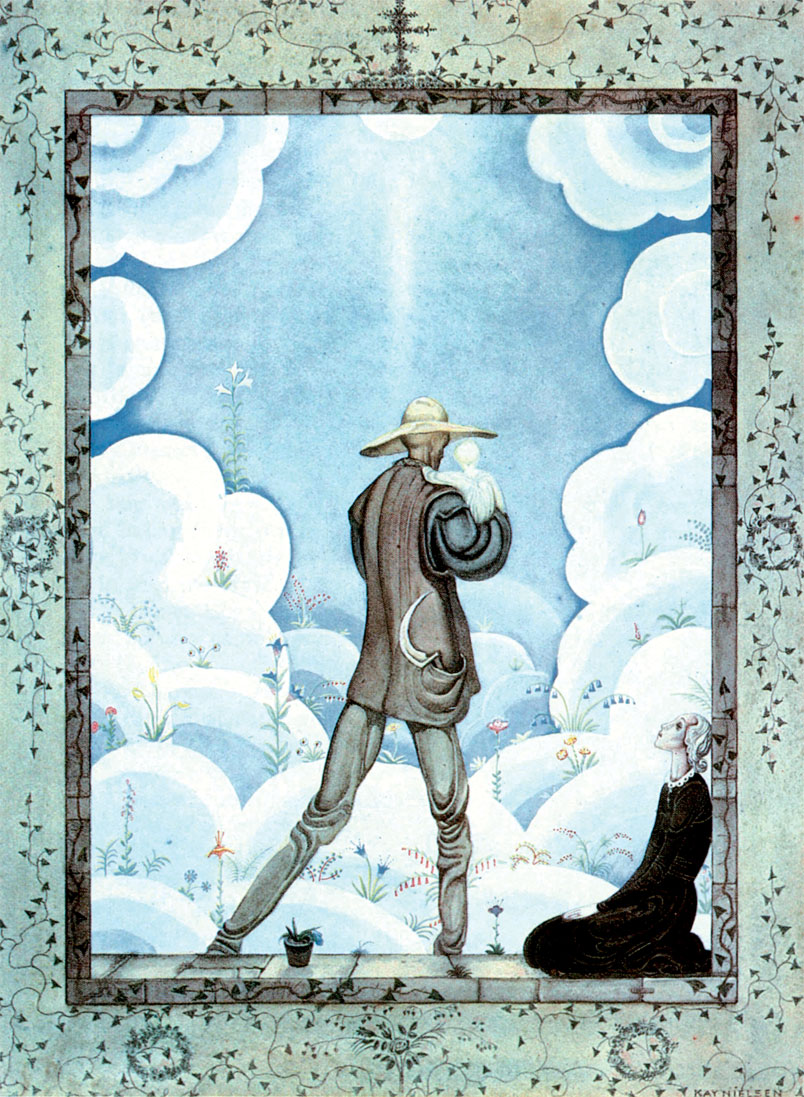 The Story of a Mother

This fairy tale by Hans Christian Andersen is one of the saddest of his fairy tales and explains the lengths a mother goes for the life of her child. The tale was first published December 1847.

A mother is looking after her very sick child and closes her eyes just for a moment after not sleeping for days. In these moments, Death, disguised as an old man takes the child away. An old woman tells her that Death has been with her and ‘never brings back what he has taken away.’ The Old woman then bribes the mother, telling her that she’ll only reveal which way Death went if she sings the lullabies she sings to her child. The mother then embarks on an awful journey of pain and sacrifice to find Death and her child including, holding a bramble bush that pierces her flesh, weeping away her eyes into a lake that collects pearls, and swapping her long black hair for old-grey hair. She finally catches up with Death in his hothouse, only to be told that he is only doing God’s work and if her child was to survive, would live a life of poverty, misery and woe. She allows Death to carry away her child. 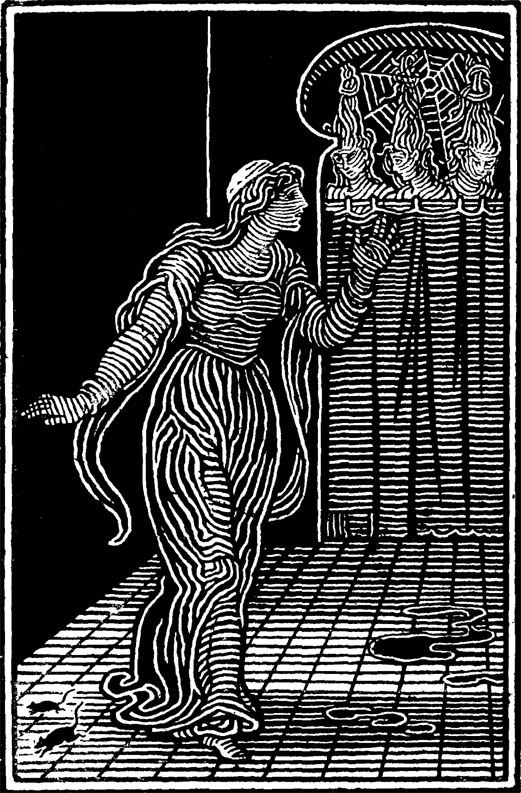 ‘At first she could not see nothing’ Illustration R. Heighway

The story of Bluebeard is one full of deceit, death, murder, blood and forbidden chambers. La Barbe Bleue (‘The Blue Beard’) was penned by Charles Perrault (1628 – 1703), a French author largely responsible for laying the foundations of the fairy-tale genre. It was published in 1697, Tales and Stories of the Past with Morals: Tales of Mother Goose.

Bluebeard himself is a wealthy aristocrat, feared and shunned because of his ugly blue beard (his unnatural hair giving a clue as to his extraordinary evil). He has been married several times, but no one knows what became of his wives. On marrying one of the three sisters, he leaves her in his château with all the keys, and instructions not to open a particular door. As soon as Bluebeard departs, the wife opens the door and discovers the floor awash with blood, and the murdered bodies of her husband’s former wives hanging from hooks on the walls. Horrified, she drops the key into the pool of blood. Unable to get it clean, this reveals her betrayal to her husband, and the story’s macabre ending unfolds. 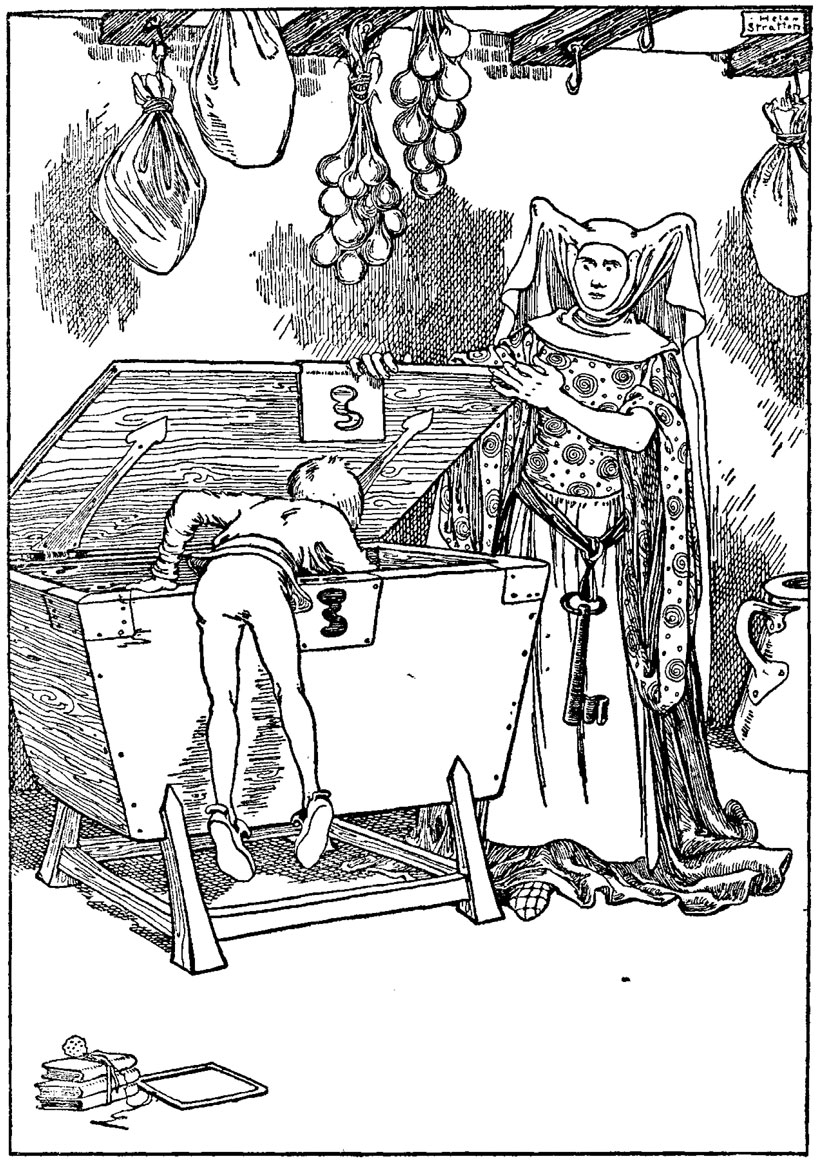 ‘He reaches down to take an apple’ illustration by Helen Stratton

The Juniper Tree is a German fairy tale collected by the Brothers Grimm in Children’s and Household Tales. The first edition of their collection attracted lukewarm critical reviews, most asserting that the stories were unappealing and unsuitable for children. The reviewers had a point; the early editions of the tales are famously gory. The Juniper Tree is a particularly gruesome tale with themes of cannibalism and murder.

This story starts out with a happy couple unable to conceive like many fairy tales and then takes various turns that have us shocked at every corner. When the couple eventually do have a child the mother is so happy that she dies. She is buried under the Juniper Tree. The husband remarries later and has a second child, a daughter. The new wife is extremely jealous of the son’s beauty and so plots his death. She tricks him into opening a chest with the promise of apples and then chops his head off as he peers in. The woman then forces her daughter to help prepare and cook him for the husband’s dinner. The daughter cries so much the stew doesn’t need salt. When the father returns home he enjoys the stew so much he eats it all and the distraught daughter then buries his bones under the Juniper Tree. The boy is then bought back to life as a bird and sings over and over to the woman driving her to insanity and when she runs out of the house he drops a millstone on her and kills her leaving only smoke, flames and fire. 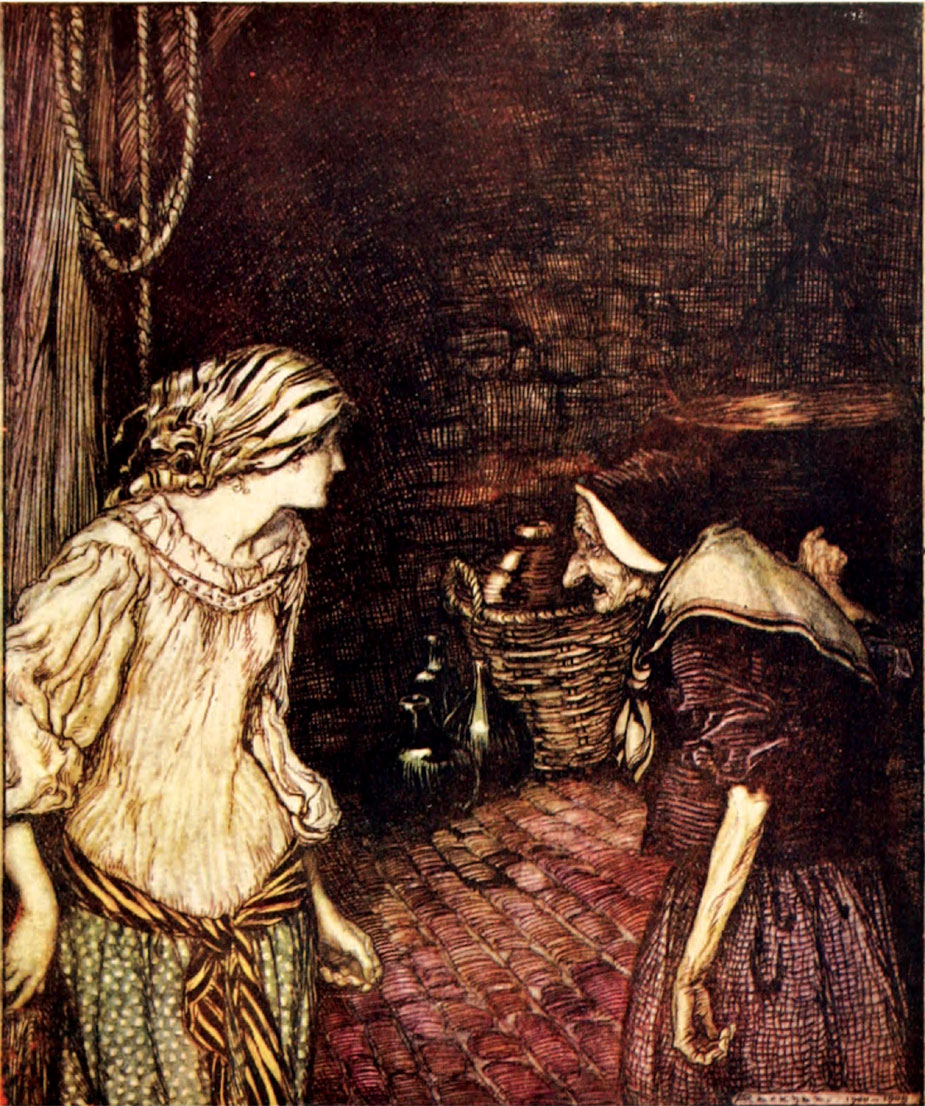 ‘At last she reached the cellar, and there she found an old, old woman with a shaking head.’ Illustration by Arthur Rackham

The Robber Bridegroom is another of most disturbing and dark fairy tales collected by the Brothers Grimm.

It tells the tale of a miller’s daughter who is being married off by her father to a rich suitor who lives in the woods. While on the way to visit him at his house in the forest she comes across a bird in a cage that warns her:

“Turn back, turn back, you young bride.
You are in a murderer’s house.”

The girl looks around the dark creepy house until she finds an old woman in the cellar. The old woman also warns her and tells her to hide before the men return. She then witnesses several men force a maiden to drink several glasses of wine (one of which breaks her heart), strip her of her clothes, lay her on the table and chop her body into pieces and prepare her for dinner. One of the men chops a finger off to retrieve a gold ring. The finger falls off the table and the miller’s daughter is able to pocket it. She later escapes and uses the finger as evidence to reveal the evil suitor’s crime. 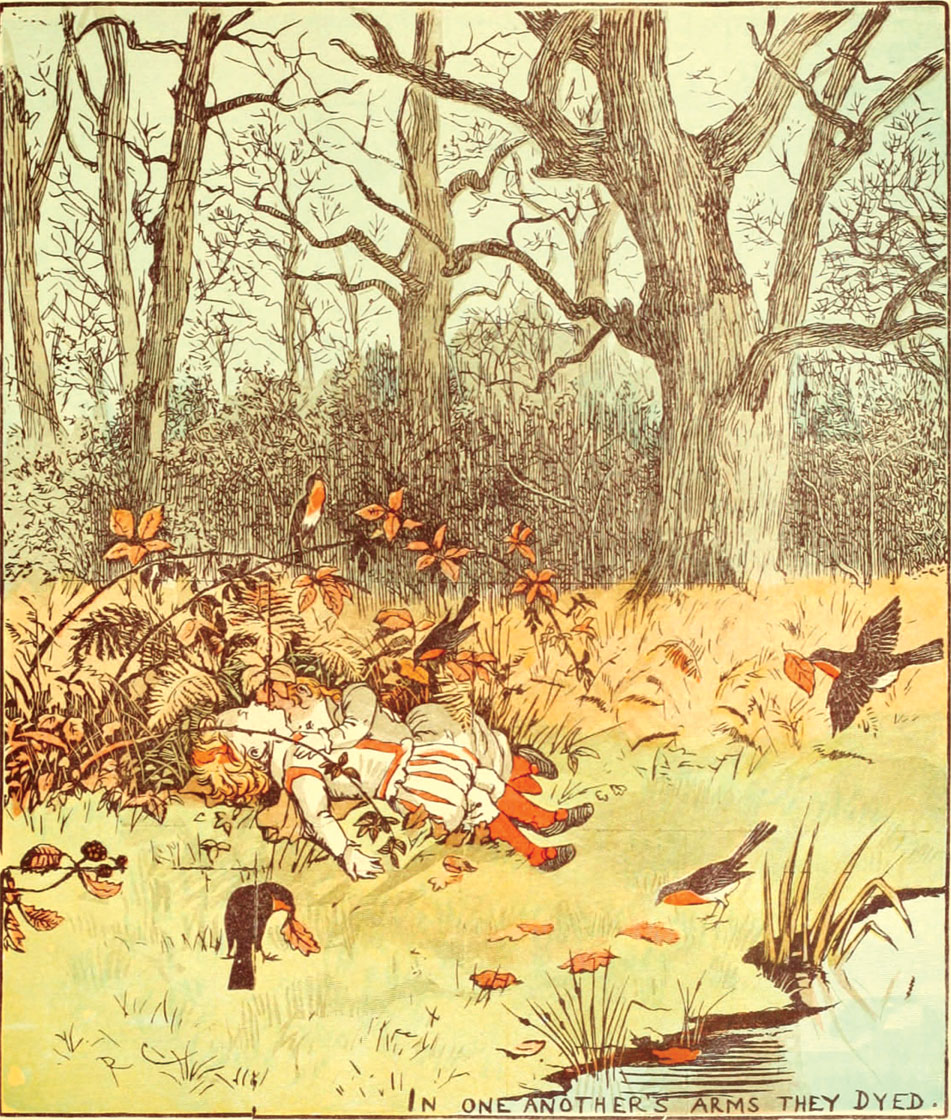 ‘In one another’s arms they dyed’ Illustration by Randolph Caldecott

Babes in the Wood.

Death, abandonment, murder, and starvation this story has it all.

It tells the tale of two young children who are orphaned when both parents fall down with a sickness. They are left to their uncle with only the promise of a sum of money when they come of age. However, the uncle is greedy and wants the money for himself and so pays two men to get rid of the children. While in the woods the men argue and fight and the two babes witness one man get murdered. The remaining guy, not having the guts to fulfil his task, then abandons them in the wood and leaves them to perish. No-one finds them so the robins cover their bodies with leaves.

Babes in the Wood is old ballad first printed by Thomas Millington in 1595. It has been reworked many times and is often attributed as a Mother Goose rhyme. The anonymous ballad was illustrated by Randolph Caldecott in a book published in 1879.