The Lapp Woman and the Finn Woman

At a little hut they stopped. It was very humble; the roof sloped right down to the ground, and the door was so low that the family had to creep on their stomachs when they wanted to go in or out. No one was in the house but an old Lapp woman, cooking fish over an oil lamp; and the reindeer told her all Gerda’s history, but his own first, for that seemed the more important, and Gerda was so numbed with cold that she could not speak.

“Oh, you poor creatures!” said the Lapp woman. “You’ve a long way to run yet! You must go more than a hundred miles into Finmark, for the Snow Queen is there, staying in the country, and burning blue lights every evening. I’ll write a few words on a dried stockfish, for I have no paper, and I’ll give you that to take to the Finn woman up there. She can give you better information than I.” 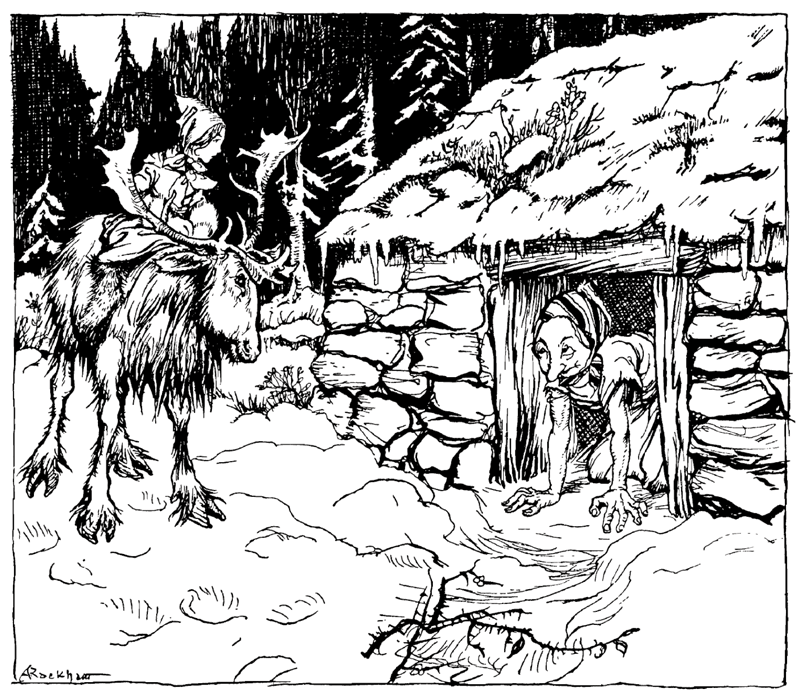 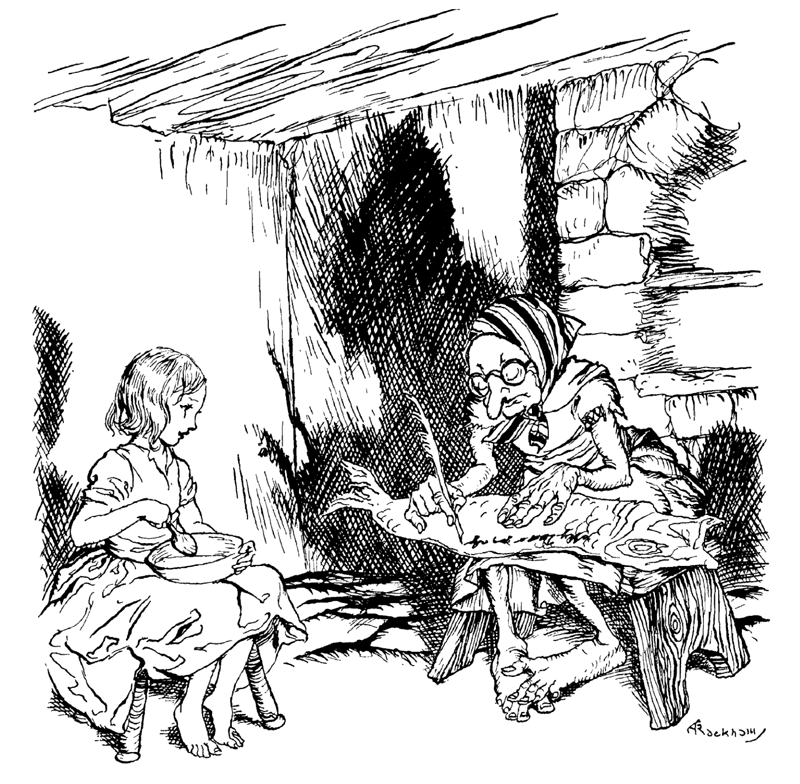 And when little Gerda had been warmed, and had had something to eat and drink, the Lapp woman wrote a few words on a dried stockfish, bidding Gerda to take good care of it, tied her on the reindeer again, and away they went. Flash! flash! it went up in the sky. All night long burned the beautiful blue Northern Lights.

And then they got to Finmark, and knocked at the chimney of the Finn woman, for she had no door at all.

There was such a heat inside that the Finn woman herself went about almost naked. She was little and very grimy. She at once loosened little Gerda’s things and took off her mittens and boots, or else it would have been too hot for her. Next she laid a piece of ice on the reindeer’s head, and read what was written on the stockfish. She read it three times, and then she knew it by heart, and put the fish into the soup-kettle, for it was good to eat, and she never wasted anything. 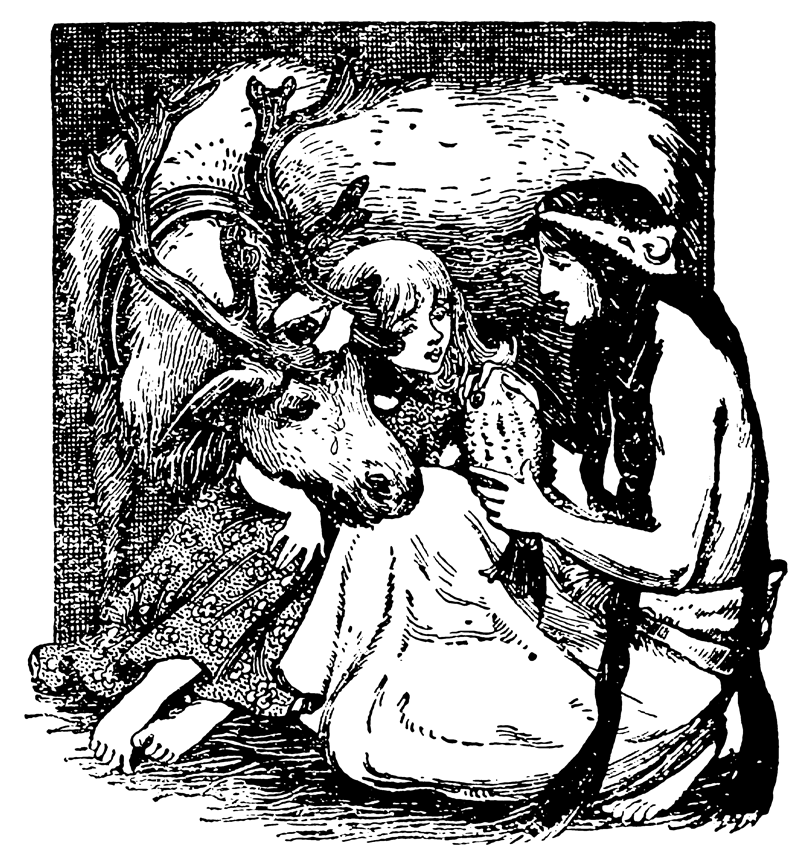 The Snow Queen by Helen Stratton

And then the reindeer told his own history first, and little Gerda’s after, and the Finn woman blinked with her wise eyes, but said nothing at all.

“You are so clever,” said the reindeer. “I know you can tie all the winds of the world together with a bit of thread; if the skipper undoes one knot he has a good wind; if he undoes the second it blows hard; but if he undoes the third and the fourth there comes such a tempest that the forests are blown down. Will you not give the little girl a draught, so that she may get twelve men’s strength, and overcome the Snow Queen?”

“Twelve men’s strength!” said the Finn woman. “Much good that would be!”

And she went to a shelf and took down a great rolled-up skin, and unrolled it. Strange characters were written upon it, and the Finn woman read until the water ran down her forehead. 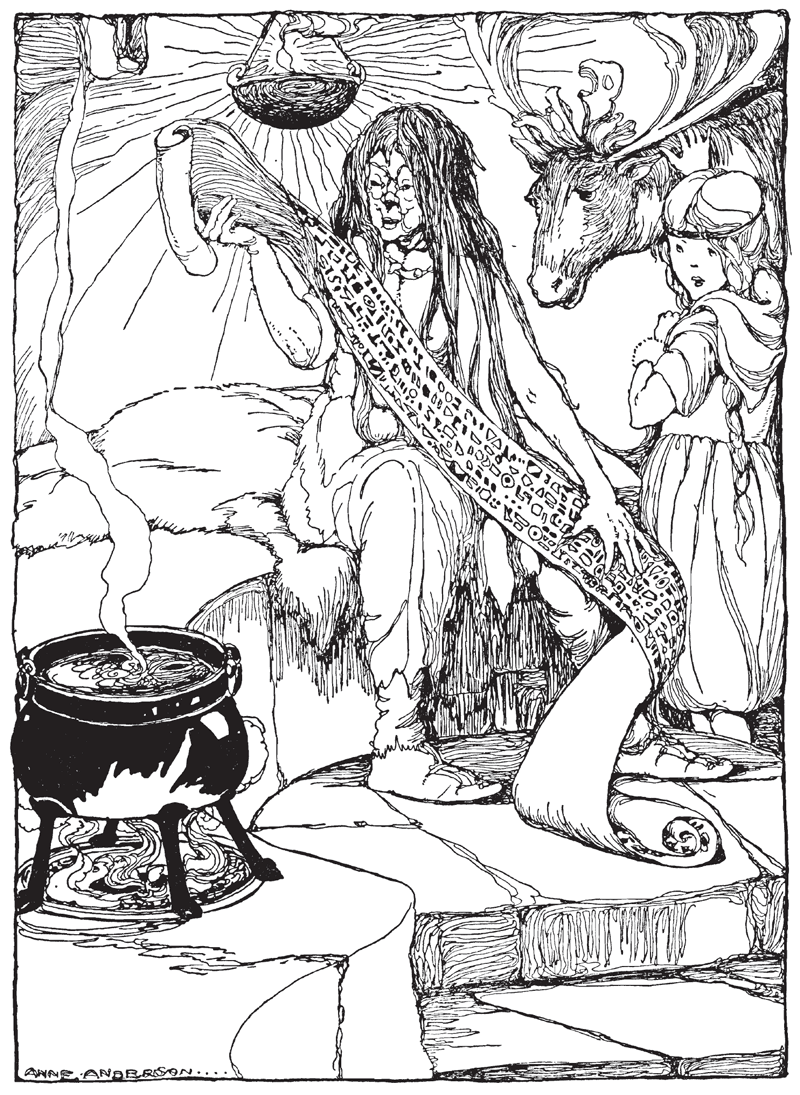 The Snow Queen by Anne Anderson

But the reindeer begged again so hard for little Gerda, and Gerda looked at the Finn woman with beseeching eyes so full of tears that she began to blink with her own, and drew the reindeer into a corner, and whispered to him, while she laid fresh ice upon his head:

“Little Kay is certainly at the Snow Queen’s, and finds everything there to his taste and liking, and thinks it the best place in the world; but that is because he has a splinter of glass in his eye and a little grain of glass in his heart. These must be got out, or he will never be human again, and the Snow Queen will keep her power over him.”

“But can’t you give little Gerda something that will give her power to conquer all this?”

“I can give her no greater power than she has already. Don’t you see how great that is? Don’t you see how man and beast are obliged to serve her, and how with her bare feet she has got on so well in the world? She must not be told of her power by us: it is in her heart, and there it will remain, because she is such a dear innocent child. If she herself cannot reach the Snow Queen and remove the bits of glass from little Kay we can be of no use! Two miles from here the Snow Queen’s garden begins; so far you can carry the little girl. Then set her down by the big bush with the red berries that stands in the snow. Don’t stop there gossiping, but hasten back here again!” 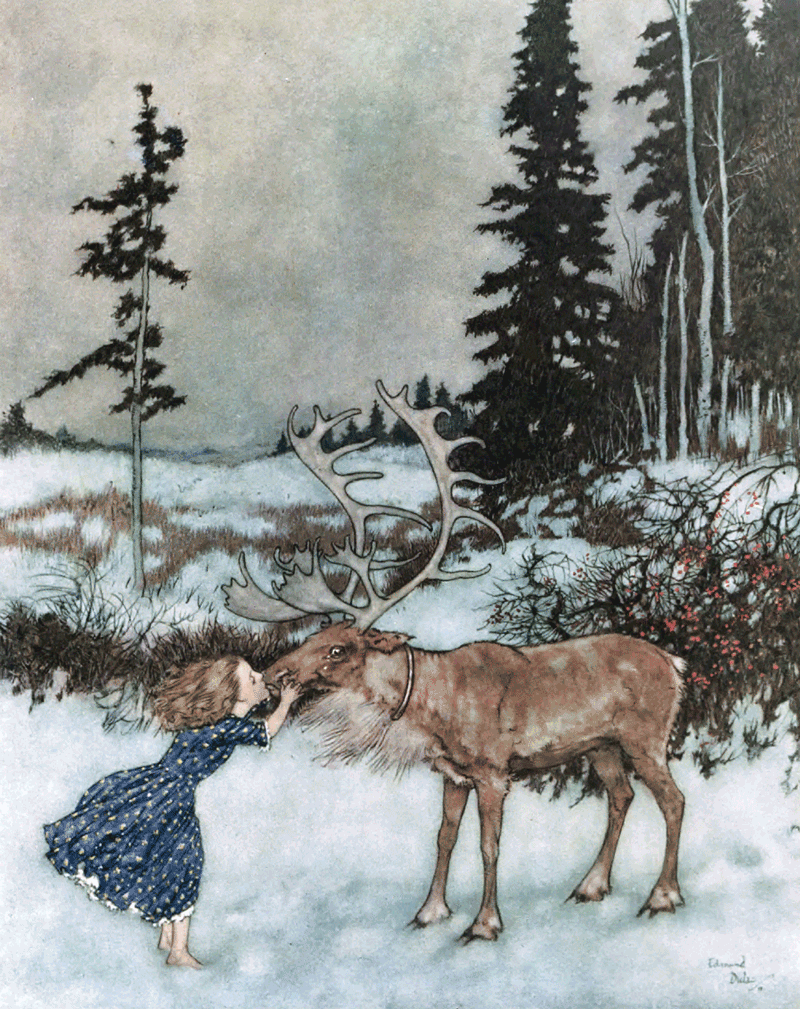 And the Finn woman lifted little Gerda on to the reindeer, who ran off as fast as he could.

“Oh, I have left my boots! I have left my mittens!” cried Gerda, as soon as she felt the biting cold. But the reindeer dare not stop: he ran on till he came to the bush with the red berries. There he put Gerda down, and kissed her on the mouth. Big bright tears ran down the creature’s cheeks; and then it ran back, as fast as it could. There stood poor Gerda without shoes, without gloves, in the midst of the terrible icy Finmark. 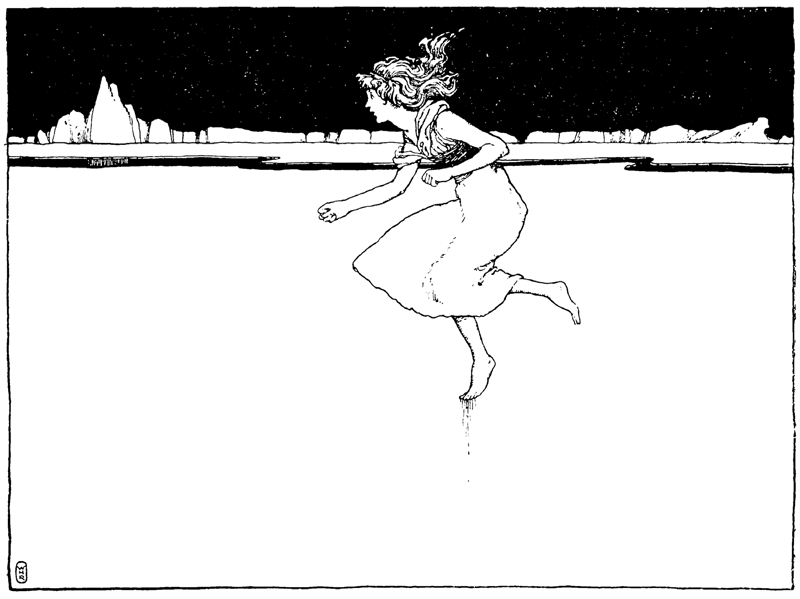 She ran on as fast as she could; then she was met by a whole regiment of snowflakes; but they did not fall from the sky, for that was quite bright, and shone with the Northern Lights. The snowflakes ran along the ground, and the nearer they came the larger they grew. Gerda still remembered how large and curious the snowflakes had appeared when she looked at them through the burning-glass. But here they were far larger and much more terrible—they were alive! They were the Snow Queen’s advance guard and had the strangest shapes. Some looked like ugly great porcupines, others like knots of snakes, that stretched out their heads, and others like little fat bears, whose hair stood on end. All were dazzling white: all were living snowflakes. 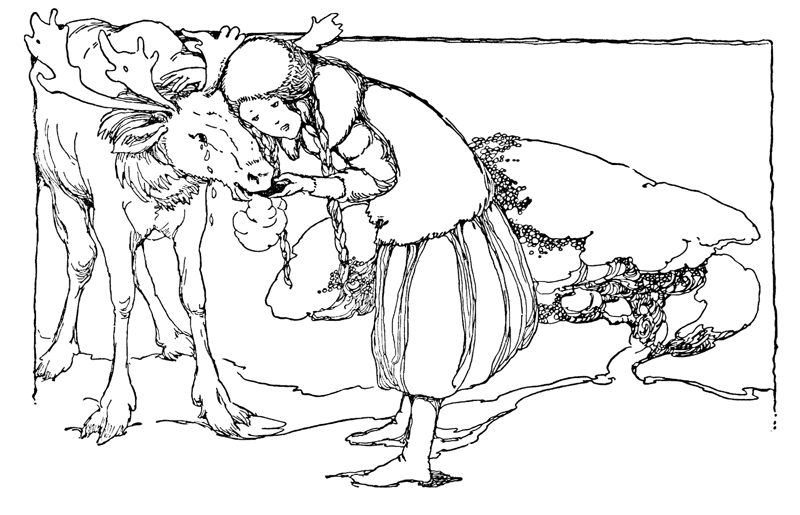 The Snow Queen by Anne Anderson

Then little Gerda said “Our Father”; and the cold was so great that she could see her own breath, which came out of her mouth like smoke. Her breath became thicker and thicker, and formed itself into little bright angels, who grew and grew as soon as they touched the earth. All had helmets on their heads and shields and spears in their hands. Their number increased more and more, and when Gerda had finished “Our Father” a whole legion stood round about her, and thrust their spears at the terrible snowflakes, so that these were shattered into a hundred pieces. Little Gerda could now go safely and fearlessly on her way. The angels chafed her hands and feet, and then she did not feel the cold so much, and hurried on to the Snow Queen’s palace.

But now we will see what Kay is doing. He certainly is not thinking of little Gerda, and least of all that she is standing in front of the palace. 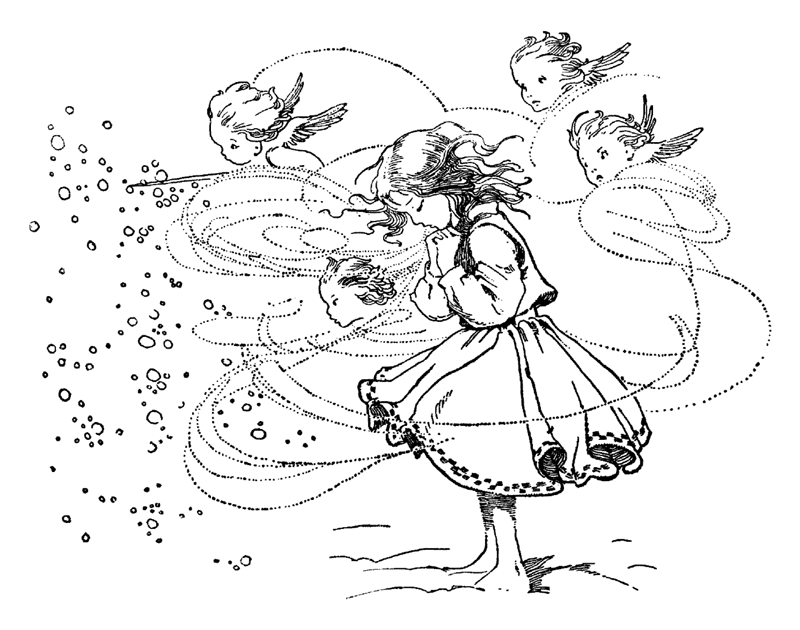 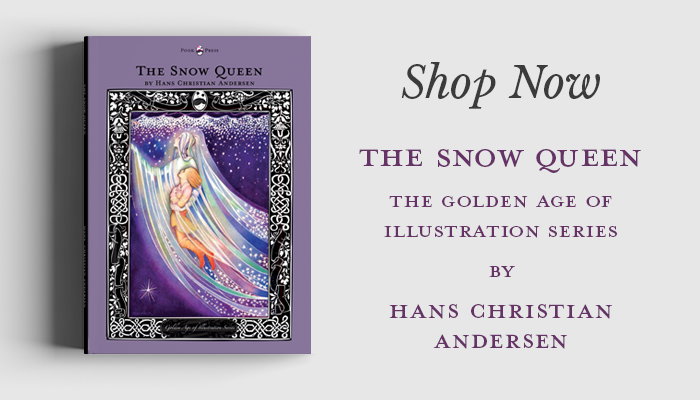