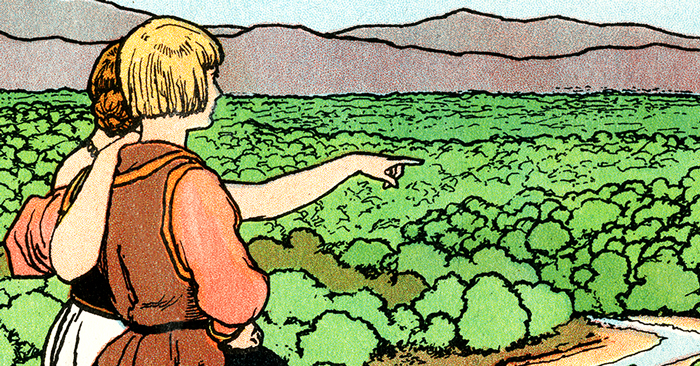 Many fairy tales feature stories of romantic love and extraordinary adventure, but for #NationalBestFriendsDay we invite you to uncover some classic stories of best friends in fairy tales. From the heat of the desert to the icy chill of a snow-covered winter, true friends can be found worldwide and are at the centre of some of our most treasured tales.

The Snow Queen – Gerda and Kay

This original Danish fairy tale was written by Hans Christian Andersen in 1844. The Snow Queen is a classic story full of wintery delight that showcases the strength of love and friendship in the face of good and evil.

They were not brother and sister, but they loved each other quite as much as if they had been”

Gerda and Kay have lived next door to each other since they were tiny. They have grown up together like siblings, their bond is strong and they love each other dearly. The window-box garden between their houses has become their playroom and they share many wonderful memories together.

In the story, an evil troll creates a mirror that reflects only the horrors of the world. The mirror shatters and shards of it fall to Earth. The glass lands in people’s eyes and hearts, turning them cold and cruel. When a shard of the mirror lands in Kay’s eye, the children’s carefree joy is brought to a halt. Kay is unkind to Gerda and his family, and he destroys their beautiful window-box garden.

Yet when Kay is taken by the malevolent Snow Queen, it is left to Gerda to rescue her best friend. Alone, but determined, Gerda sets out to find Kay and bring him home safely. She travels many miles, making friends and surviving treacherous dangers as she goes. The Snow Queen is a beautiful tale, highlighting that love and friendship always win in the end. 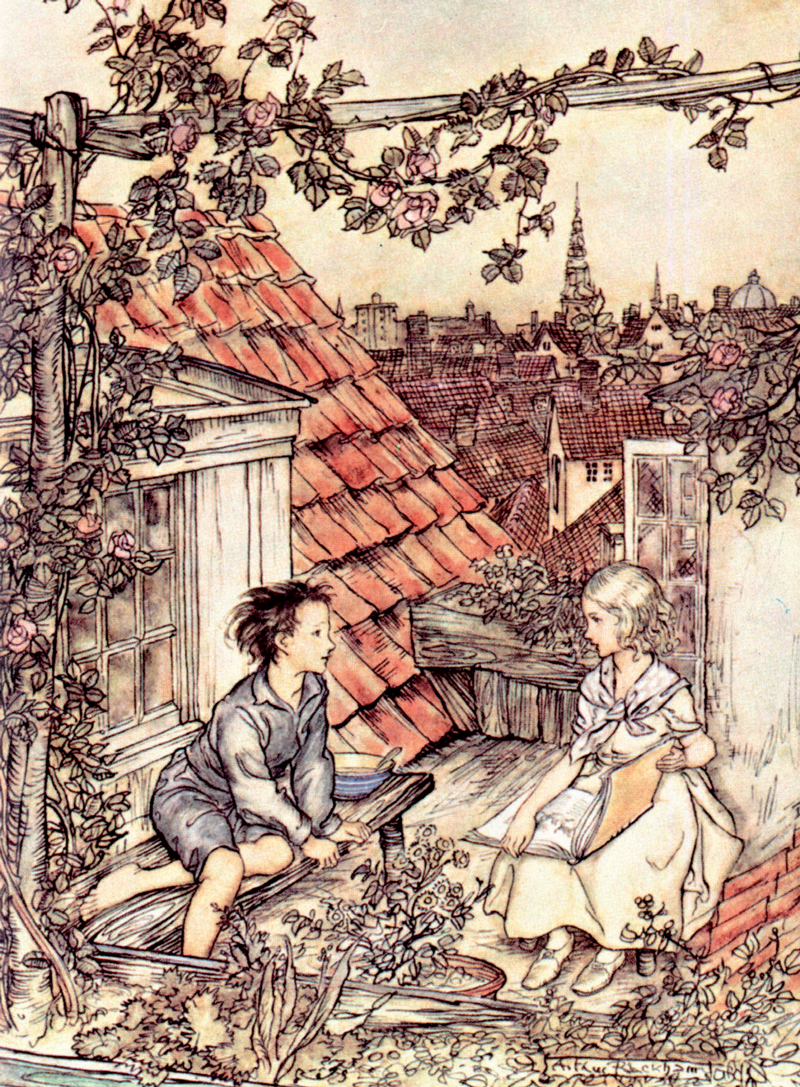 Sinbad’s tales are not featured in the original fourteenth-century One Thousand and One Nights manuscript, but were a later addition and are included in the first European translation of the Arabian Nights tales by Antoine Galland, which were published in English in 1711. In this story, two unlikely characters become great friends in a coincidental encounter.

Sinbad the Porter is toiling hard transporting goods across the city when he decides to rest on a bench outside the gates of a large house. He calls out to his god, complaining about his unrewarded work while wealthy merchants, who do little, can live in such grand homes. Sinbad the Sailor, the owner of the house, overhears the Porter’s prayers, and he sends for him to come inside. The pair bond over their shared name, and the Sailor entertains the Porter while telling him the seven stories of how he came to riches.

The Sailor gifts the Porter with not only the knowledge and wisdom from his voyages, but he also gives his new friend a great sum of money. 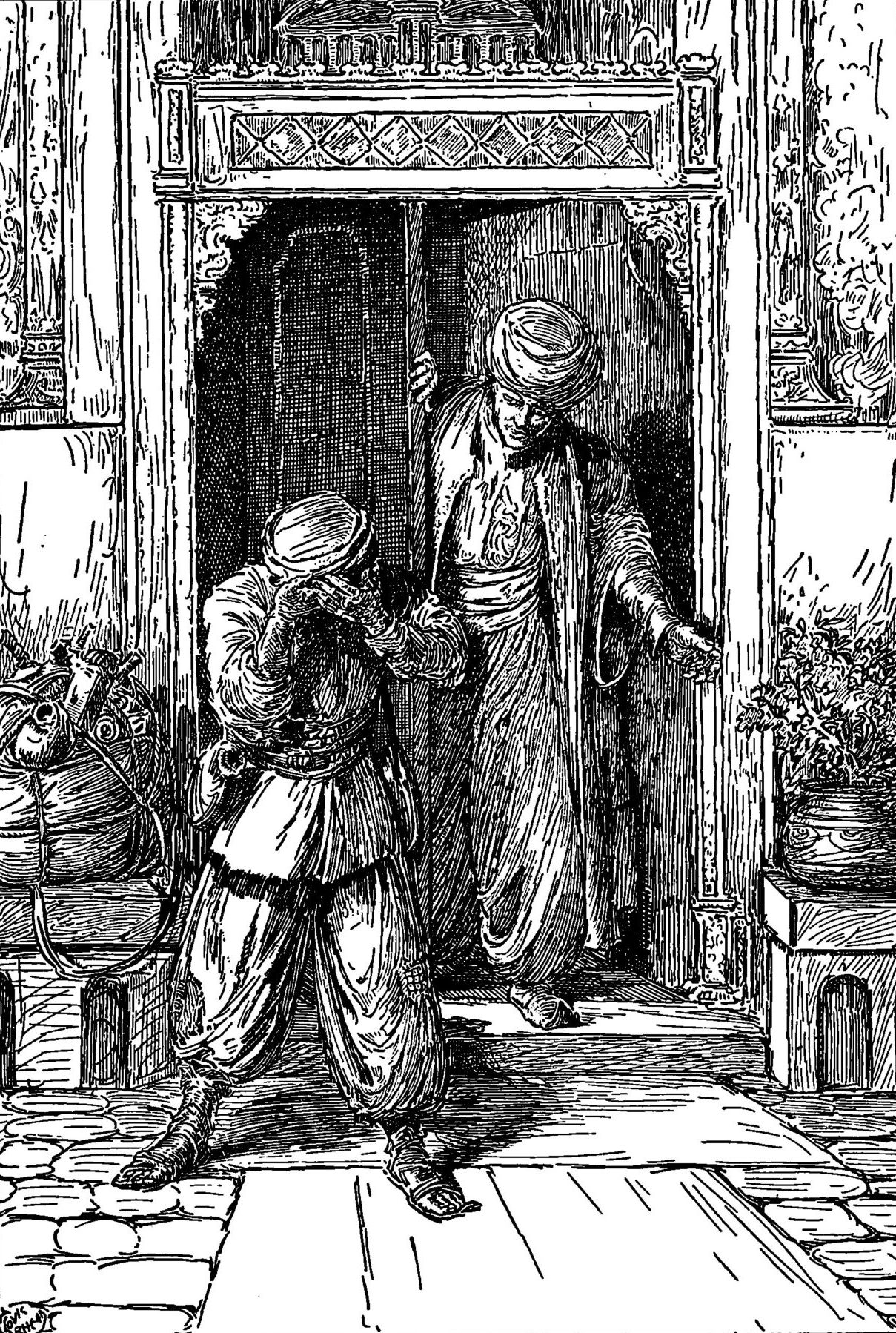 Sinbad the Sailor went on many thrilling adventures, and Pook Press has published his tale alongside a wealth of other exciting Arabian Nights stories. Discover the richly illustrated volume here.

The Elfin Grove – Mary and Gossamer

This Brothers Grimm fairy tale, The Elfin Grove, is a story of magical friendships and the wonders of the fae kingdom. The fir grove near little Mary’s house is a topic of much discussion among the villagers. It’s sunless and murky, and mysterious creatures are said to lurk within it. While playing hide and seek, Mary finds herself being led into the fir grove. It is here that she discovers a whimsical fairyland and becomes close friends with a kind elf named Gossamer. The pair begin a magical adventure and Gossamer shows Mary around the fairies’ home, introducing her to the kind creatures living beyond the grove.

When Mary returns to her own home, she finds she has been gone for several years. Gradually, her memories of the fairy kingdom fade, but she has not seen the last of her good friend, Gossamer. Her own daughter, Elfie, soon finds the fir-tree grove and begins to have her own wonderful adventures with the very same elf.

Soon afterwards Gossamer told Mary the time was come to bid her farewell, and gave her a ring in token of their friendship”

This classic story of best friends in fairy tales is filled with magic and imagination. Uncover the wondrous tale here.

The Nutcracker of Nuremberg is Alexandre Dumas’ 1844 retelling of the classic fairy tale, The Nutcracker and the Mouse King, originally written by E. T. A. Hoffman and published in 1816. Dumas’ French adaptation was used as the basis for the famous ballet, The Nutcracker in 1892. All three versions tell the same magical tale of a young girl, Marie, whose Christmas nutcracker comes to life.

Marie liked this quaint little man from the first moment she saw him. The more she looked at him the more she was struck by the sweetness and amiability of his face”

In the dead of night on Christmas Eve, just as the clock strikes midnight, mice creep out from the floorboards, and Marie’s dolls begin to move. The Nutcracker leads the dolls into battle against the mice and the cruel, seven-headed Mouse King. Marie wakes up to see the fight and quickly goes to assist her Nutcracker.

Together, Marie and the Nutcracker enter a fantastical realm inhabited by mice and dolls. The Nutcracker shows Marie the many wonders of his kingdom. Their adventure strengthens their bond, and soon a fast friendship forms between the two. Perhaps Marie’s beloved Nutcracker is more than he appears to be… 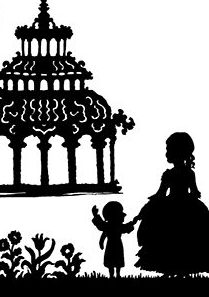 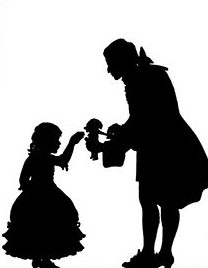 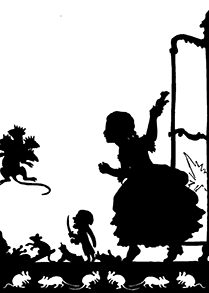 Discover the magical edition of The Nutcracker of Nuremberg and further explore the beautiful friendship between Marie and her Nutcracker. The illustrated book can be found here.

This German fairy tale was collected by the Brothers Grimm and published in 1818. Unrelated to the well-known story of Snow White and her many dwarf friends, this is the story of two sisters who love each other dearly. Snow-white is a quiet child, she enjoys reading and doing the housework, while her cheerful counterpart, Rose-red, is full of energy and loves to be outdoors. Despite their differences, the girls hate to be apart.

Living with their widowed mother, Snow-white and Rose-red do all they can to look after the small family. They are obedient and kind and make friends with all the wild creatures they come across. One dark wintery evening, a large black bear comes knocking at the cottage, seeking a warm place to sleep safely. The girls’ mother invites him in, and he soon becomes good friends with the children. The bear recognises the loving hearts of Snow-white and Rose-red and ensures their kindness is returned to them.

The two children loved one another so much, that they always walked hand in hand; and when Snow-white said, ‘We will not forsake one another,’ Rose-red answered, ‘Never as long as we live'”

This heart-warming tale has been published in a collection of Grimm fairy tales, accompanied by Charles Folklard‘s gorgeous illustrations. Discover the collection here.

This famous tale of two siblings who are the closest of friends originated in Germany. Although the author of this classic story is unknown, Hansel and Gretel was first published by the Brothers Grimm in 1812 in the Kinder- und Hausmärchen collection.

How they did rejoice and embrace each other, and dance about and kiss each other!“

Hansel and Gretel are the children of a poor woodcutter. When famine begins to plague the land, the woodcutter can no longer afford to feed his whole family. The siblings’ stepmother tells their father to abandon the children deep in the woods so there are two less mouths to feed. Overhearing this conversation, Hansel and Gretel hatch a plan to save themselves, leaving a trail of breadcrumbs to find their way back home.

As the story progresses, the children find themselves in more danger as their escape plan fails. Even when faced with an evil witch, Hansel and Gretel remain brave and ensure that neither leaves the other behind. The pair’s love for one another knows no bounds in this timeless tale as perilous adventure strengthens their friendship. 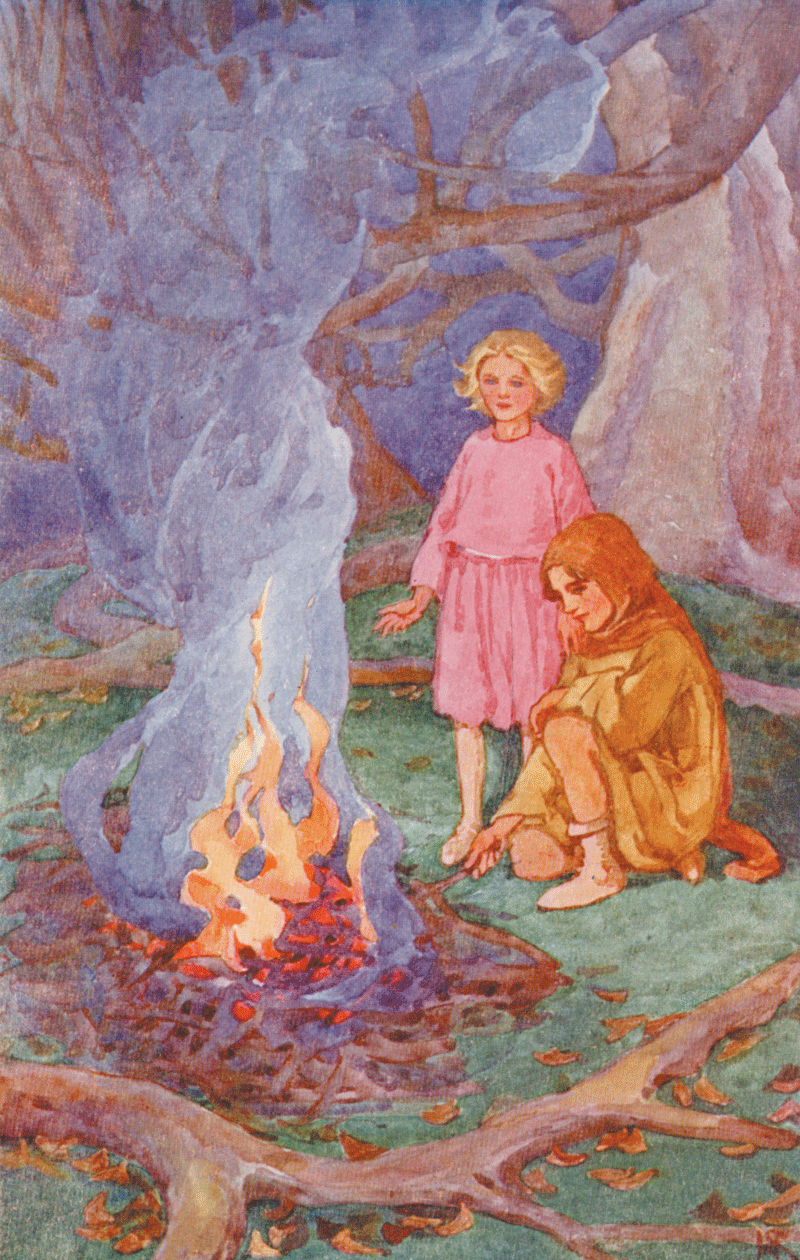 Hansel and Gretel by Helen Stratton

An illustrated edition of Hansel and Gretel has been proudly republished by Pook Press, breathing new life into the wondrous work of illustrators such as Charles Robinson and Kay Nielsen. Discover the classic tale here.

A classic Italian fairy tale, Puss in Boots was first published in the mid-sixteenth century. The story conveys an unconventional friendship between a cat and his master. The anthropomorphic Puss displays his loyalty and devotion to his lord by securing them both money and power. He does this through trickery, deceiving other people and animals for his and his master’s gain. Thanks to the audacious cat’s hoodwinking skills, these unlikely friends are able to go from rags to riches. 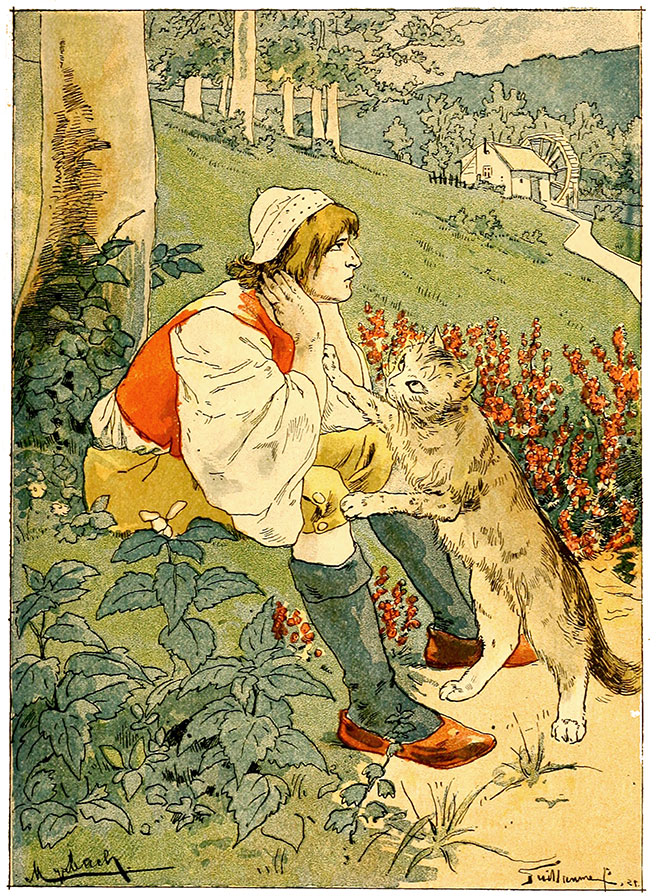 The Stag, the Crow, and the Jackal – Stag and Crow

This original Indian fairy tale teaches the rarity of true friendship and the importance of choosing your friends wisely. Found in The Talking Thrush and Other Tales from India, the story is set in the jungle and introduces a Stag and a Crow who are extremely close friends. But when a Jackal intervenes, the pair’s friendship is put to the test.

The Jackal attempts to trick the Stag and lure him away from the Crow. However, the Crow is a loyal bird and cares deeply for the Stag. He goes to great lengths to help his friend and will do all he can to prevent the Stag from being harmed by the Jackal or vicious huntsmen.

When your hair is grey you will know that such is the way of the world, and that a true friend who sticks to the end, is harder to find than a diamond mine”

We hope that you enjoy celebrating #NationalBestFriendsDay with some of these wonderful stories of best friends in fairy tales. You can also unearth a wealth of fairy tales on our website and through our online fairy tale library.