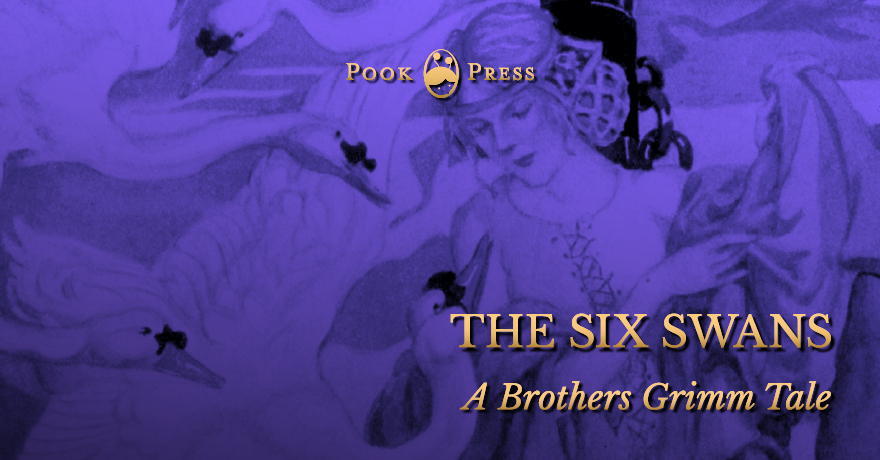 Six years of silence, six little shirts of star-flowers, and an escape from death by fire.

A KING was once hunting in a large wood, and pursued his game so hotly that none of his courtiers could follow him. But when evening approached he stopped, and looking around him perceived that he had lost himself. He sought a path out of the forest, but could not find one, and presently he saw an old woman with a nodding head, who came up to him. “My good woman,” said he to her, “can you not show me the way out of the forest?”

“Oh, yes, my lord King,” she replied; “I can do that very well, but upon one condition, which if you do not fulfil, you will never again get out of the wood, but will die of hunger.”

“What, then, is this condition?” asked the King.

“I have a daughter,” said the old woman, “who is as beautiful as any one you can find in the whole world, and well deserves to be your bride. Now, if you will make her your Queen, I will show you your way out of the wood.” In the anxiety of his heart, the King consented, and the old woman led him to her cottage, where the daughter was sitting by the fire. She received the King as if she had expected him, and he saw at once that she was very beautiful, but yet she did not quite please him, for he could not look at her without a secret shuddering. However, after all he took the maiden upon his horse, and the old woman showed him the way, and the King arrived safely at his palace, where the wedding was to be celebrated. 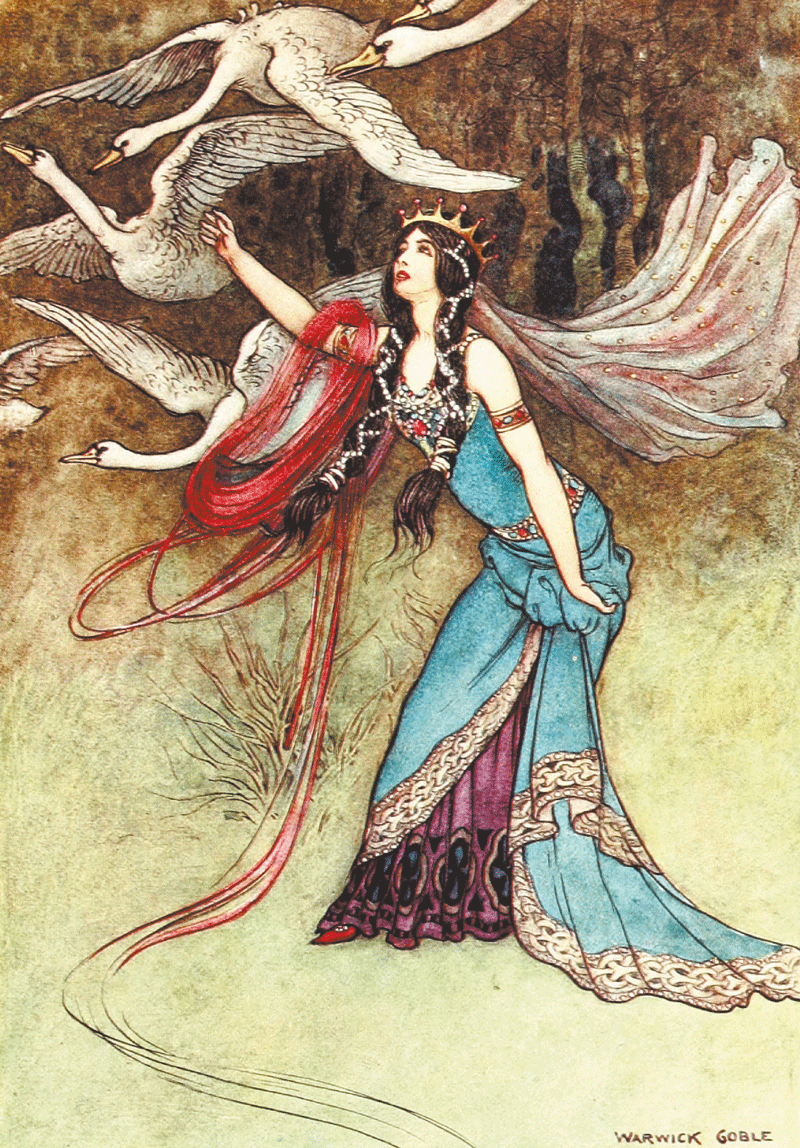 “The queen threw one of the shirts over each of them, and when the shirts tougced their bodies, they were changed into swans, and flew away over the wood.” from The Fairy Book illustrated by Warwick Goble

The King had been married once before, and had seven children by his first wife, six boys and a girl, whom he loved above everything else in the world. He became afraid, soon, that the stepmother might not treat them very well, and might even do them some great injury, so he took them away to a lonely castle which stood in the midst of a forest. This castle was so hidden, and the way to it so difficult to discover, that he himself could not have found it if a wise woman had not given him a ball of cotton which had the wonderful property, when he threw it before him, of unrolling itself and showing him the right path. The King went, however, so often to see his dear children, that the Queen noticed his absence, became inquisitive, and wished to know what he went to fetch out of the forest. So she gave his servants a great quantity of money, and they disclosed to her the secret, and also told her of the ball of cotton which alone could show her the way. She had now no peace until she discovered where this ball was concealed, and then she made some fine silken shirts, and, as she had learnt of her mother, she sewed within each one a charm. One day soon after, when the King was gone out hunting, she took the little shirts and went into the forest, and the cotton showed her the path. The children, seeing some one coming in the distance, thought it was their dear father, and ran out towards her full of joy. Then she threw over each of them a shirt, which, as it touched their bodies, changed them into swans, which flew away over the forest. The Queen then went home quite contented and thought she was free of her stepchildren; but the little girl had not met her with the brothers, and the Queen did not know of her. 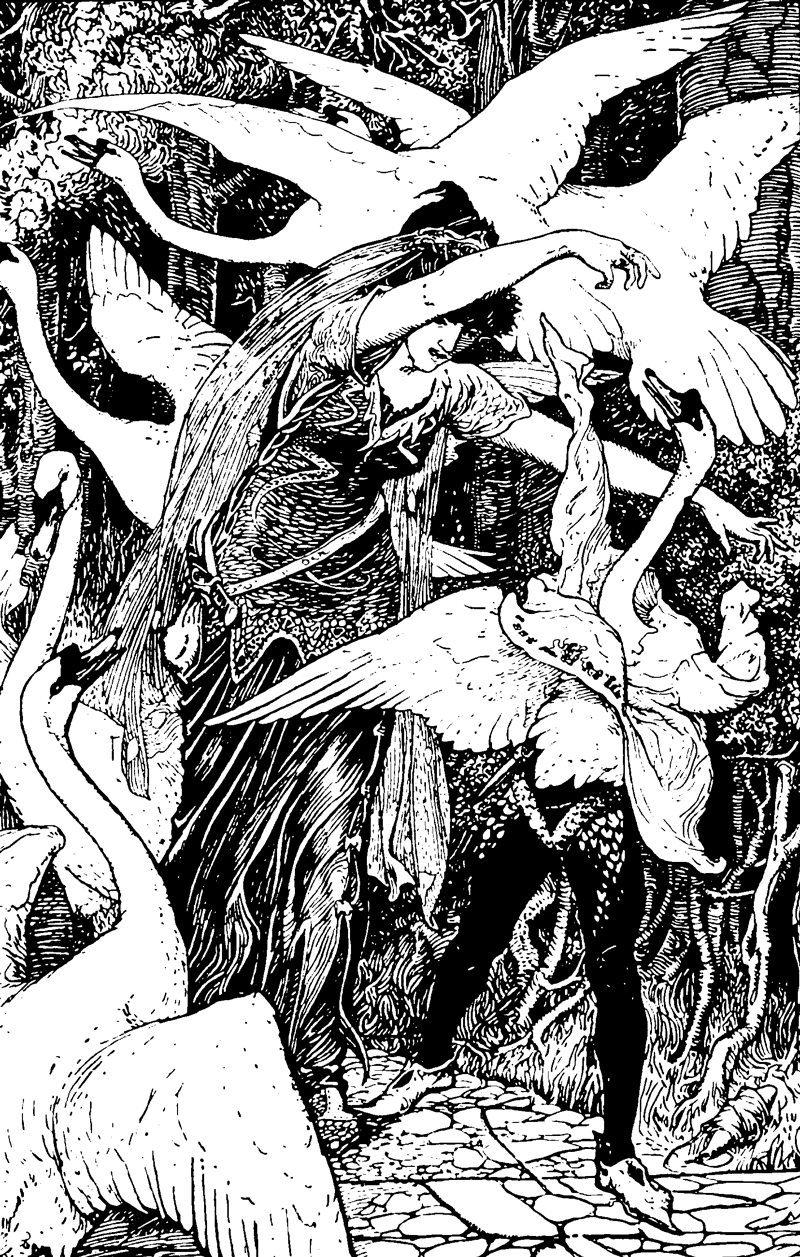 The six brothers changed into swans by their Stepmother – illustration by H. J. Ford from Andrew Langs Yellow Fairy Book

The following day the King went to visit his children, but he found only the maiden. “Where are your brothers?” asked he. “Ah, dear father,” she replied, “they are gone away and have left me alone”; and she told him how she had looked out of the window and seen them changed into swans, which had flown over the forest; and then she showed him the feathers which they had dropped in the courtyard, and which she had collected together. The King was much grieved, but he did not think that his wife could have done this wicked deed, and, as he feared the girl might also be stolen away, he took her with him. She was, however, so much afraid of the stepmother, that she begged him not to stop more than one night in the castle.

The poor maiden thought to herself, “This is no longer my place, I will go and seek my brothers”; and when night came she escaped and went quite deep into the wood. She walked all night long and great part of the next day, until she could go no further from weariness. Just then she saw a rude hut, and walking in she found a room with six little beds, but she dared not get into one, but crept under, and, laying herself upon the hard earth, prepared to pass the night there. Just as the sun was setting, she heard a rustling, and saw six white swans come flying in at the window. They settled on the ground and began blowing one another until they had blown all their feathers off, and their swan’s down stripped off like a shirt. Then the maiden knew them at once for her brothers, and gladly crept out from under the bed, and the brothers were not less glad to see their sister, but their joy was of short duration. “Here you must not stay,” said they to her; “this is a robbers’ hiding-place; if they should return and find you here, they will murder you.” “Can you not protect me, then?” inquired the sister.

“No,” they replied; “for we can only lay aside our swan’s feathers for a quarter of an hour each evening, and for that time we regain our human form, but afterwards we resume our changed appearance.”

Their sister then asked them with tears, “Can you not be restored again?”

“Oh, no,” replied they, “the conditions are too difficult. For six long years you must neither speak nor laugh, and during that time you must sew together for us six little shirts of star-flowers, and should there fall a single word from your lips, then all your labour will be vain.” Just as the brother finished speaking, the quarter of an hour elapsed, and they all flew out of the window again like swans. 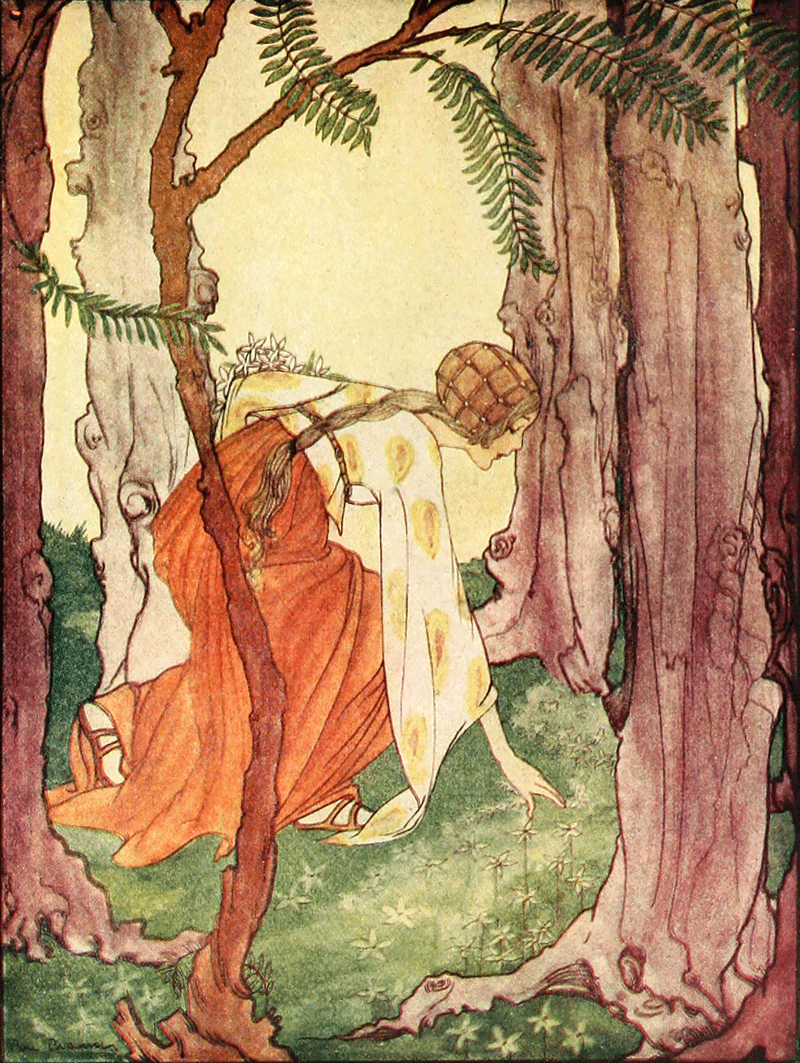 The little sister, however, made a solemn resolution to rescue her brothers, or die in the attempt; and she left the cottage, and, penetrating deep into the forest, passed the night amid the branches of a tree. The next morning she went out and collected the star-flowers to sew together. She had no one to converse with, and for laughing she had no spirits, so there up in the tree she sat, intent upon her work. After she had passed some time there it happened that the King of that country was hunting in the forest, and his huntsmen came beneath the tree on which the maiden sat. They called to her and asked, “Who art thou?” But she gave no answer. “Come down to us,” continued they: “we will do thee no harm.” She simply shook her head, and, when they pressed her further with questions, she threw down to them her gold necklace, hoping therewith to satisfy them. They did not, however, leave her, and she threw down her girdle, but in vain; and even her rich dress did not make them desist. At last the hunter himself climbed the tree and brought down the maiden, and took her before the King. The King asked her, “Who art thou? What dost thou upon that tree?” But she did not answer; and then he asked her in all the languages that he knew, but she remained dumb to all as a fish. Since, however, she was so beautiful, the King’s heart was touched, and he conceived for her a strong affection. Then he put around her his cloak, and, placing her before him on his horse, took her to his castle. There he ordered rich clothing to be made for her, and, although her beauty shone as the sunbeams, not a word escaped her. The King placed her by his side at table, and there her dignified mien and manners so won upon him, that he said, “This maiden will I marry, and no other in the world”; and after some days he was united to her.

Now, the King had a wicked stepmother, who was discontented with his marriage, and spoke evil of the young Queen. “Who knows whence the wench comes?” said she. “She who cannot speak is not worthy of a King.” A year after, when the Queen brought her first-born into the world, the old woman took him away. Then she went to the King and complained that the Queen was a murderess. The King, however, would not believe it, and suffered no one to do any injury to his wife, who sat composedly sewing at her shirts and paying attention to nothing else. When a second child was born, the false stepmother used the same deceit, but the King again would not listen to her words, but said, “She is too pious and good to act so: could she but speak and defend herself, her innocence would come to light.” But when again, the third time, the old woman stole away the child, and then accused the Queen, who answered not a word to the accusation, the King was obliged to give her up to be tried, and she was condemned to suffer death by fire. 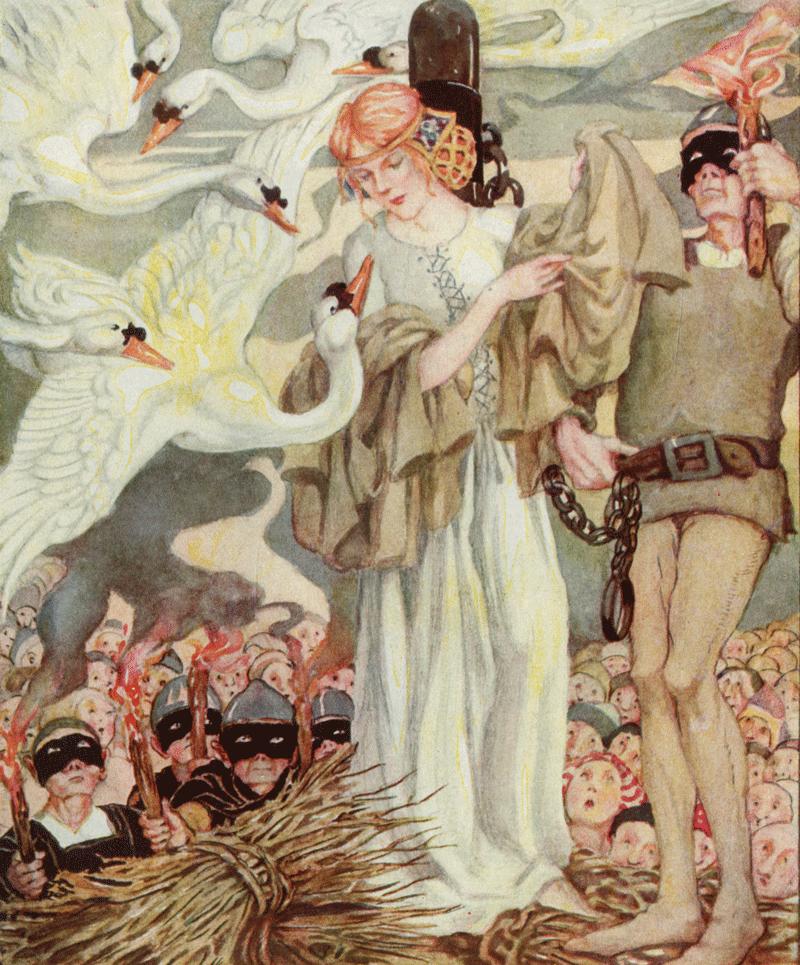 When the time had elapsed, and the sentence was to be carried out, it happened that the very day had come round when her dear brothers should be made free; the six shirts were also ready, all but the last, which yet wanted the left sleeve. As she was led to the scaffold, she placed the shirts upon her arm, and just as she had mounted it, and the fire was about to be kindled, she looked round, and saw six swans come flying through the air. Her heart leapt for joy as she perceived her deliverers approaching, and soon the swans, flying towards her, alighted so near that she was enabled to throw over them the shirts, and as soon as she had so done their feathers fell off and the brothers stood up alive and well; but the youngest wanted his left arm, instead of which he had a swan’s wing. They embraced and kissed each other, and the Queen, going to the King, who was thunderstruck, began to say, “Now may I speak, my dear husband, and prove to you that I am innocent and falsely accused”; and then she told him how the wicked woman had stolen away and hidden her three children. When she had concluded, the King was overcome with joy, and the wicked stepmother was led to the scaffold and bound to the stake and burnt to ashes.

The King and the Queen for ever after lived in peace and prosperity with their six brothers. 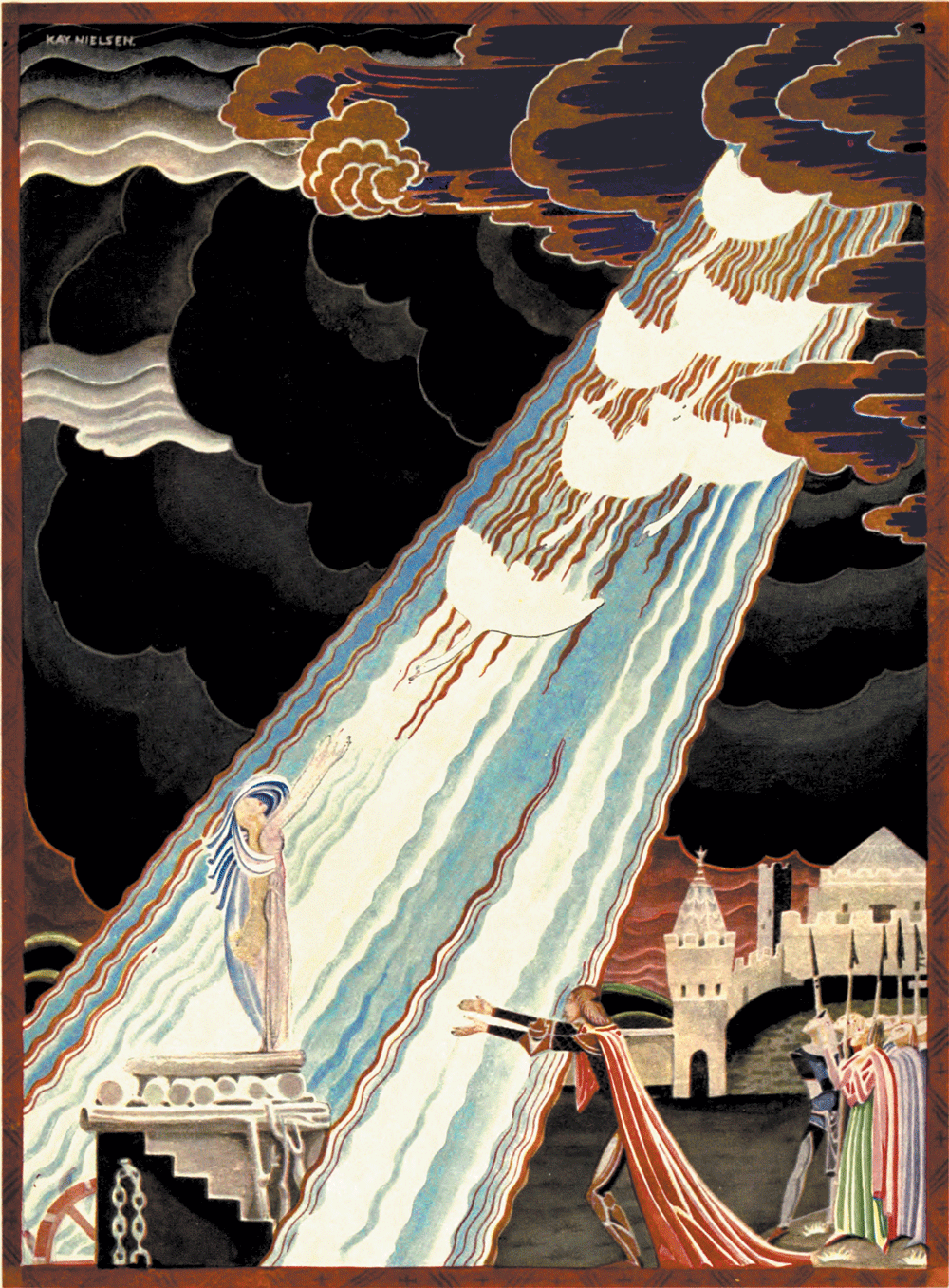 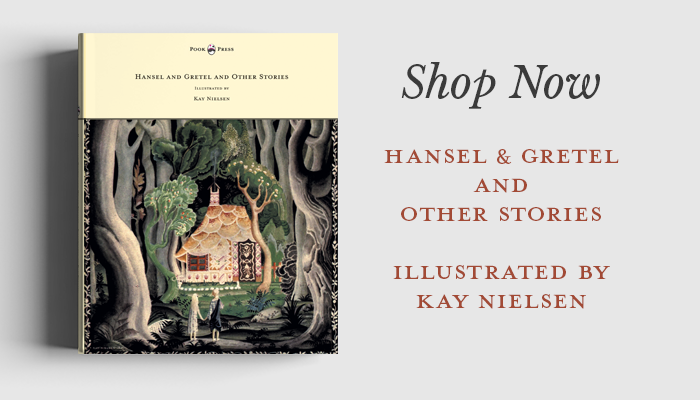