Johnnie and Grizzle – The English Hansel and Gretel

To celebrate National Storytelling Week we are kicking off our new and exciting project; Fortnightly Fairy Tale – whereby we will be sharing with you a wonderful fairy tale, on a fortnightly basis. To receive these fabulous folklore stories from times past straight into your inbox, then please sign up to our mailing list!

This Fortnightly Fairy Tale is the story of Johnnie and Grizzle, published by Joseph Jacobs (1854 – 1916), in his collection of European Folk and Fairy Tales (1916). This particular version of the narrative is almost identical to the Grimm’s Hänsel und Gretel. Jacobs was greatly inspired by the work of the German antiquarians and the romantic nationalism common to folklorists of his age. He wished English children to have access to English fairy tales (despite this particular story originating from the Baltic States!).

The English Hansel and Gretel

There was once a poor farmer who had two children named Johnnie and Grizzle. Now things grew worse and worse for the farmer till he could scarcely earn enough to eat and drink. All his crops went to pay rent and taxes. So one night he said to his wife,

“Betty, my dear, I really do not know what to do; there is scarcely anything in the house to eat, and in a few days we shall all be starving. What I think of doing is to take the poor lad and lassie into the forest and leave them there; if somebody finds them they will surely keep them alive, and if nobody finds them they might as well die there as here; I cannot see any other way; it is their lives or ours; and if we die what can become of them?”

“No, no, father,” said the farmer’s wife; “wait but a few days and perhaps something will turn up.

“We have waited and have waited and things are getting worse every day; if we wait much longer we shall all be dead. No, I am determined on it; tomorrow the children to the forest.”

Now it happened that Johnnie was awake in the next room and heard his father and his mother talking. He said nothing but thought and thought and thought; and early next morning he went out and picked a large number of bright coloured pebbles and put them in his pocket. After breakfast, which consisted of bread and water, the farmer said to Johnnie and Grizzle, “Come, my dears, I am going to take you for a walk,” and with that he went with them into the forest nearby.

Johnnie said nothing, but dropped one of his pebbles at every turning, which would show him the way back. When they got far into the forest the farmer said to the children, “My dears, I have to go and get something. Stay here and don’t go away, and I’ll soon come back. Give me a kiss, children, “ and with that he hurried away and went back home by another road.

After a time Grizzle began to cry and said,

But Johnnie said, “Never mind, Grizzle, I can take you home; you just follow me.” 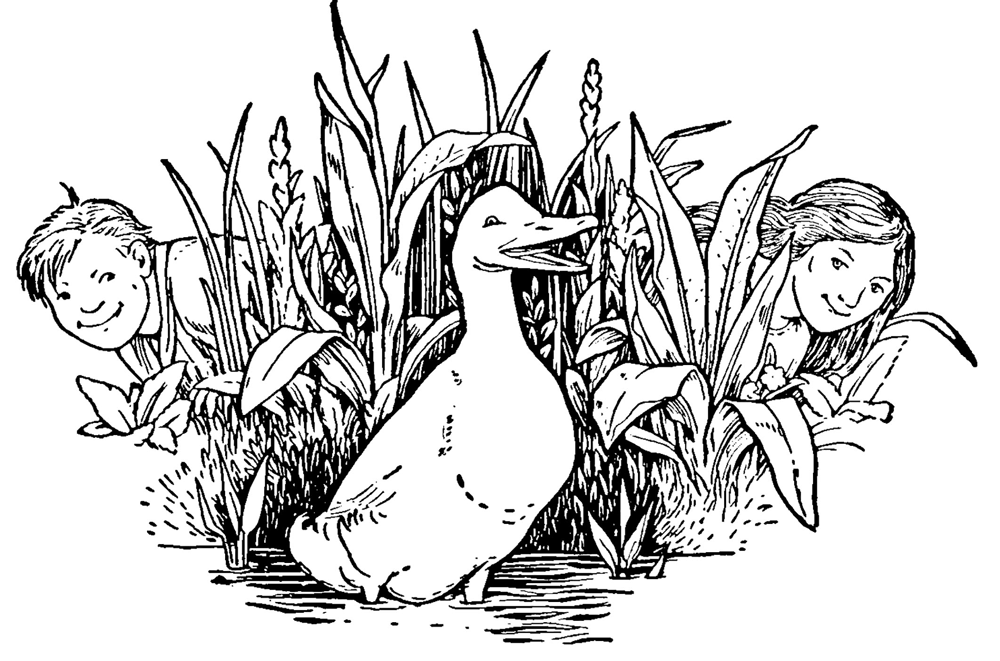 So Johnnie looked out for the pebbles he had dropped, and found them at each turn of the road, and a little after midday got home and asked their mother for their dinner.

“There’s nothing in the house, children, but you can go and get some water from the well and, please God, we’ll have bread in the morning.”

When the farmer came home he was astonished to find that the children had found their way home, and could not imagine how they had alone so. But at night he said to his wife, “Betty, my dear, I do not know how the children came home; but that does not make any difference; I cannot bear to see them starve before my eyes, better that they should starve in the forest. I will take them there again tomorrow.”

Johnnie heard all this and crept downstairs and put some more pebbles into his pocket; and though the farmer took them this time further into the forest the same thing occurred as the day before. But this time Grizzle said to her mother and father, “Johnnie did such a funny thing; whenever we turned a new road he dropped pebbles. Wasn’t that funny? And when we came back he looked for the pebbles, and there they were; they had not moved.”

Then the farmer knew how he had been done, and as evening came on he locked all the doors so that Johnnie could not get out to get any pebbles. In the morning he gave them a hunk of bread as before for their breakfast and told them he was going to take them into the nice forest again. Grizzle ate her bread, but Johnnie put his into his pocket, and when they got inside the forest at every turning he dropped a few crumbs of his bread. When his father left them he tried to trace his way back by means of these crumbs. But, alas, and alackaday! The little birds had seen the crumbs and eaten them all up, and when Johnnie went to search for them they had all disappeared.

So they wandered and they wandered, more and more hungry all the time, till they came to a glade in which there was a funny little house; and what do you think it was made of? The door was made of butterscotch, the windows of sugar candy, the bricks were all chocolate creams, the pillars of lollipops, and the roof of gingerbread.

No sooner had the children seen this funny little house than they rushed up to it and commenced to pick pieces off the door, and take out some of the bricks, while Johnnie climbed on Grizzly’s back, and tore off some of the roof (what was that made of?). Just as they were eating all this the door opened and a little old woman, with red eyes, came out and said, “Naughty, naughty children to break up my house like that. Why didn’t you knock at the door and ask to have something, and I would gladly give it to you?”

“Please ma’am,” said Johnnie, “I will ask for something; I am so, so hungry, or else I wouldn’t have hurt your pretty roof.” “Come inside my house,” said the old woman and let them come into her parlour. And that was made all of candies, the chairs and table of maple sugar, and the couch of coconut. But as soon as the old woman got them inside her door she seized hold of Johnnie and took him through the kitchen and put him in a dark cubby-hole, and left him there with the door locked.

Now this old woman was a witch, who looked out for little children, whom she fattened up and ate. So she went back to Grizzle, and said, “You shall be my little servant and do my work for me, and, as for that brother of yours, he’ll make a fine meal when he’s fattened up.” So this witch kept Johnnie and Grizzle with her, making Grizzle do all the housework, and every morning she went to the cubby-hole in which she kept Johnnie and gave him a good breakfast, and later in the day a good dinner, and at night a good supper; but after she gave him his supper she would say to him, “Put out your forefinger,” and when he put it out the old witch, who was nearly blind, felt it and muttered, “Not fat enough yet!” 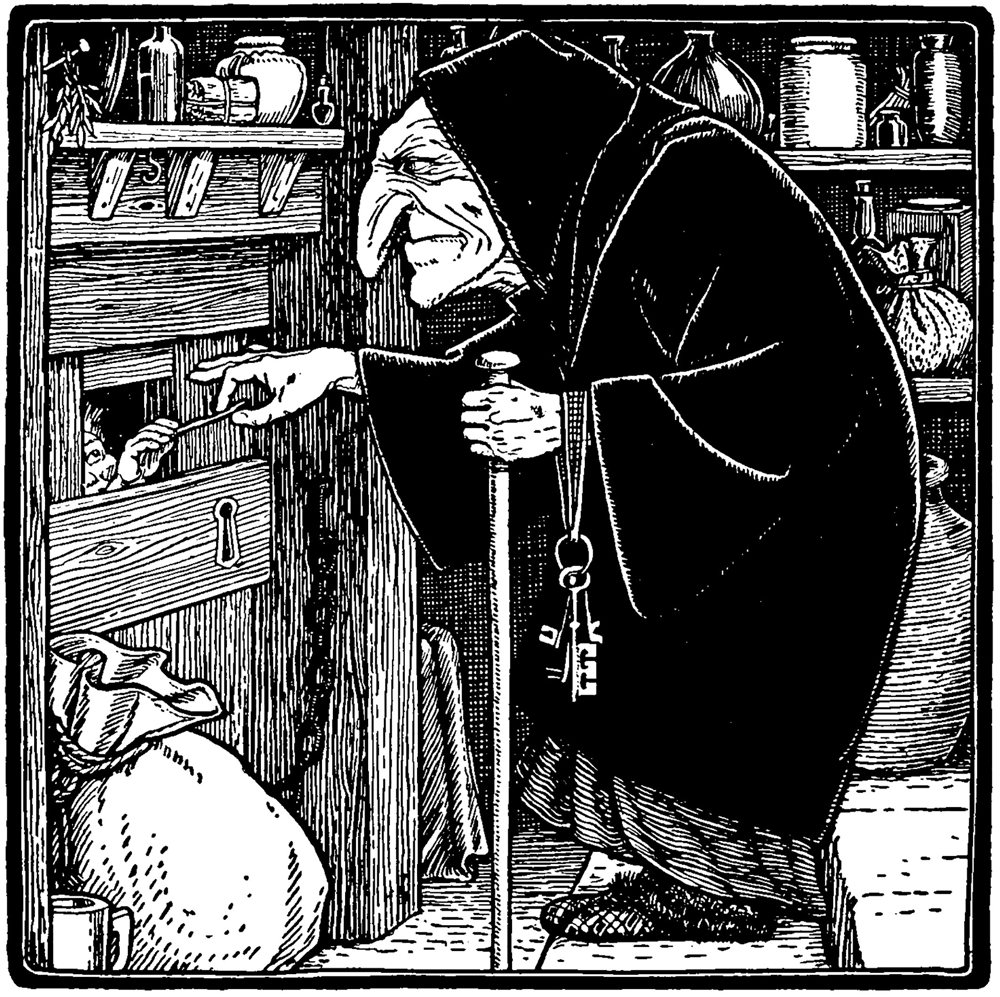 After a while Johnnie felt he was getting real fat and was afraid the witch would eat him up. So he searched about till he found a stick about the size of his finger, and when the old witch asked him to put out his finger he put out the stick, and she said, “Goodness gracious me, the boy is as thin as a lath! I must feed him up more.”
So she gave him more and more food, and every day he put out the stick till at last one day he got careless, and when she took the stick it fell out of his hand, and she felt what it was. So she flew into a terrible rage and called out, “Grizzle, Grizzle, make the oven hot. This lad is fat enough for Christmas.”

Poor Grizzle did not know what to do, but she had to obey the witch. So she piled the wood on under the oven and set it alight. And after a while the old witch said to her,

And when the witch asked her again whether it was hot enough, Grizzle said, “I do not know how hot an oven ought to be.” “Get away, get away,” said the old witch; “I know, let me see.” And she poked her old head into the oven. Then Grizzle pushed her right into the oven and closed the door and rushed out into the back yard and let Johnnie out of the cubby-hole.

Then Johnnie and Grizzle ran away towards the setting sun where they knew their own house was, till at last they came to a broad stream too deep for them to wade. But just at that moment they looked back, and what do you think they saw? The old witch, by some means or other, had got out of the oven and was rushing after them. What were they to do? What were they to do? Suddenly Grizzle saw a fine big duck swimming towards them, and she called out:

Then the duck came up to the bank, and Johnnie and Grizzle went into the water and, by resting their hands on the duck’s back, swam across the stream just as the old witch came up.

At first she tried to make the duck come over and carry her, but the duck said, “Quack! Quack!” and shook its head.

You can find this story, along with many others, in these two books: