The Bear’s Bad Bargain – A Tale from the Punjab 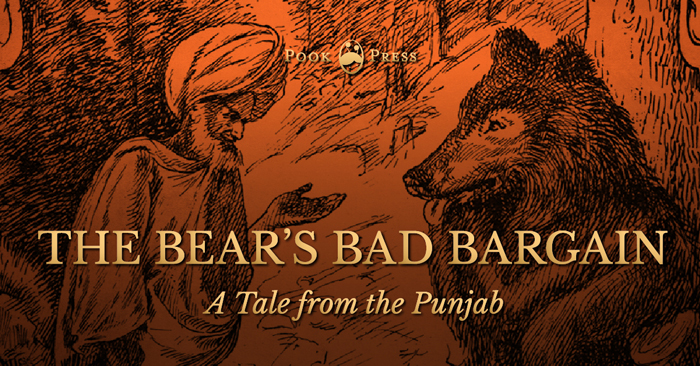 A Tree of Golden Pears, a Gluttonous Bear, and a Delicious Meal

Once upon a time, a very old woodman lived with his very old wife in a tiny hut close to the orchard of a rich man, so close that the boughs of a pear-tree hung right over the cottage yard. Now it was agreed between the rich man and the woodman, that if any of the fruit fell into the yard, the old couple were to be allowed to eat it; so you may imagine with what hungry eyes they watched the pears ripening, and prayed for a storm of wind, or a flock of flying foxes, or anything which would cause the fruit to fall. But nothing came, and the old wife, who was a grumbling, scolding old thing, declared they would infallibly become beggars. So she took to giving her husband nothing but dry bread to eat, and insisted on his working harder than ever, till the poor old soul got quite thin; and all because the pears would not fall down! At last, the woodman turned round and declared he would not work any more unless his wife gave him khichdi to his dinner; so with very bad grace, the old woman took some rice and pulse, some butter and spices, and began to cook a savoury khichdi. What an appetising smell it had, to be sure! The woodman was for gobbling it up as soon as ever it was ready. ‘No, no,’ cried the greedy old wife, ‘not till you have brought me in another load of wood; and mind it is a good one. You must work for your dinner.’ 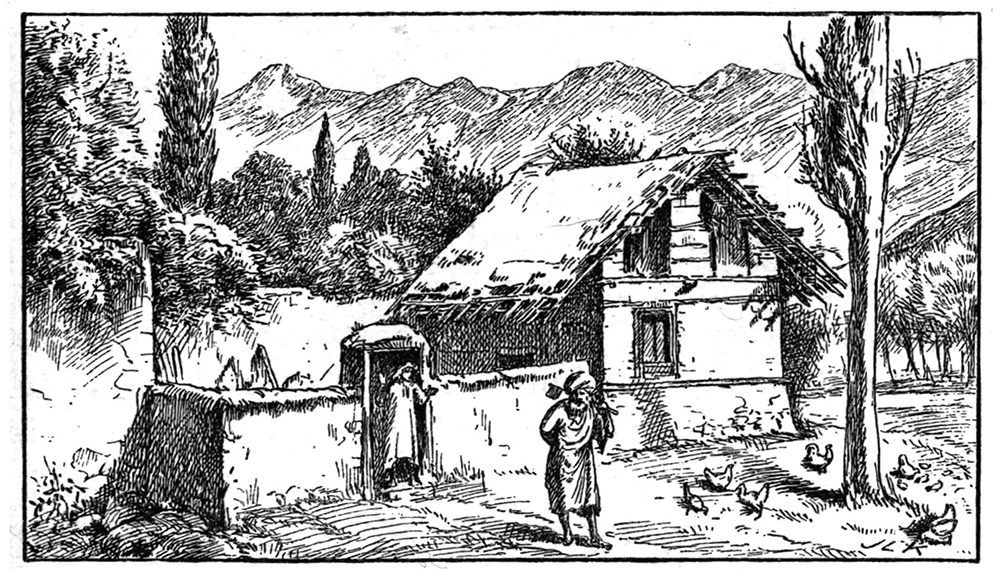 So the old man set off to the forest and began to hack and to hew with such a will that he soon had quite a large bundle, and with every faggot he cut he seemed to smell the savoury khichdi and think of the feast that was coming.

Just then a bear came swinging by, with its great black nose tilted in the air, and its little keen eyes peering about; for bears, though good enough fellows, on the whole, are just dreadfully inquisitive.

‘Peace be with you, friend ! ‘ said the bear, ‘and what may you be going to do with that remarkably large bundle of wood? ‘

‘It is for my wife,’ returned the woodman. ‘ The fact is,’ he added confidentially, smacking his lips, ‘she has made such a khichdi for dinner! And if I bring in a good bundle of wood she is pretty sure to give me a plentiful portion. Oh, my dear fellow, you should just smell that khichdi!’

At this, the bear’s mouth began to water, for, like all bears, he was a dreadful glutton.

‘Do you think your wife would give me some too if I bought her a bundle of wood ? ‘ he asked anxiously.

‘Perhaps; if it was a very big load,’ answered the woodman craftily.

‘I’m afraid not,’ returned the woodman, shaking his head; ‘you see khichdi is an expensive dish to make,-there is rice in it, and plenty of butter, and pulse, and–‘

‘Say half a ton, and it’s a bargain!’ quoth the woodman.

‘Half a ton is a large quantity!’ sighed the bear.

‘There is saffron in the khichdi,’ remarked the woodman casually.

The bear licked his lips, and his little eyes twinkled with greed and delight.

‘Well, it’s a bargain! Go home sharp and tell your wife to keep the khichdi hot; I’ll be with you in a trice.’

Away went the woodman in great glee to tell his wife how the bear had agreed to bring half a ton of wood in return for a share of the khichdi.

Now the wife could not help allowing that her husband had made a good bargain, but being by nature a grumbler, she was determined not to be pleased, so she began to scold the old man for not having settled exactly the share the bear was to have; ‘For,’ said she, ‘he will gobble up the potful before we have finished our first helping.’

On this, the woodman became quite pale. ‘In that case,’ he said, ‘ we had better begin now, and have a fair start.’ So without more ado, they squatted down on the floor, with the brass pot full of khichdi between them, and began to eat as fast as they could. 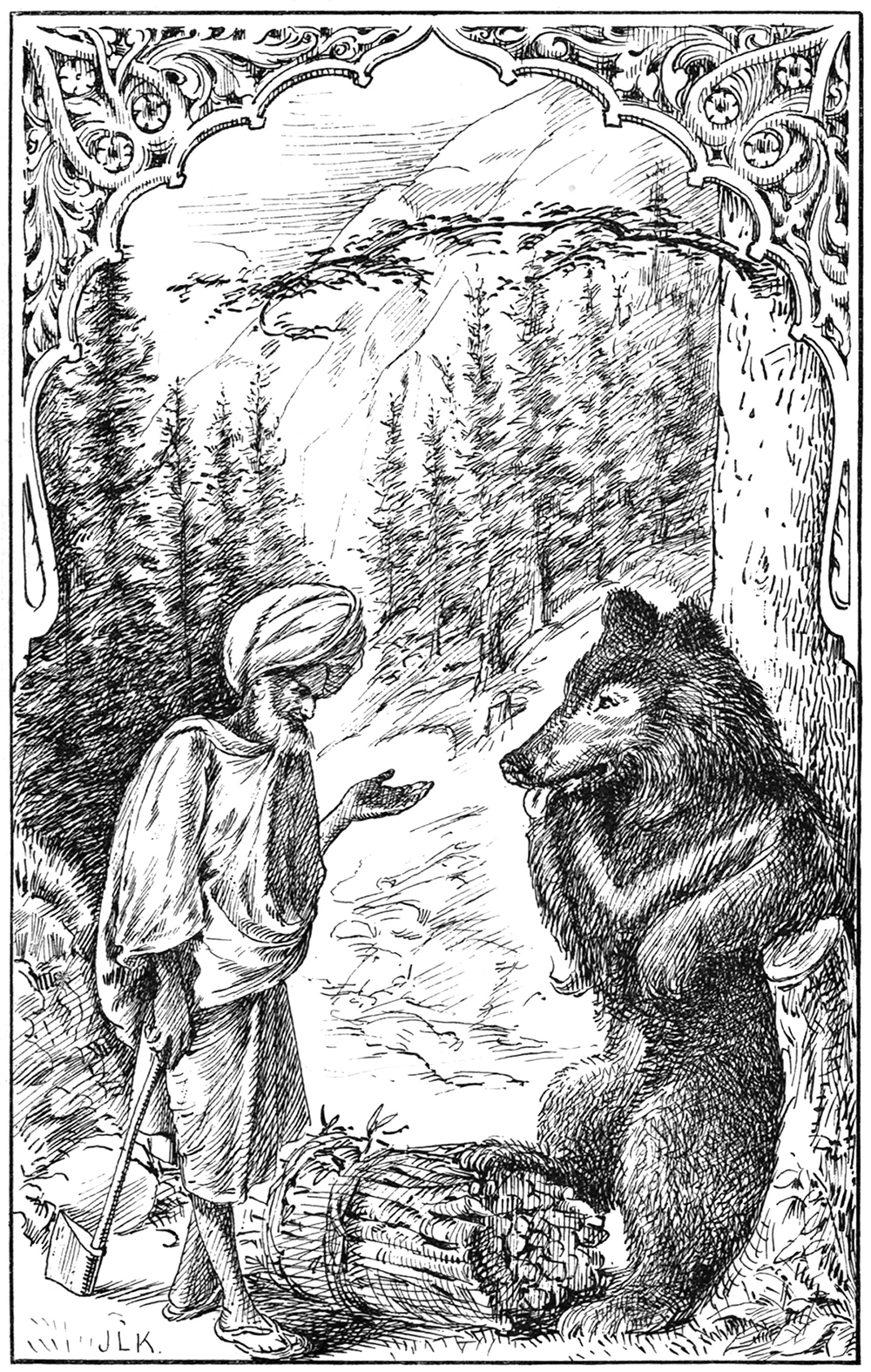 ‘Remember to leave some for the bear, wife,’ said the woodman, speaking with his mouth crammed full.

‘Certainly, certainly,’ she replied, helping herself to another handful.

‘My dear,’ cried the old woman in her turn, with her mouth so full that she could hardly speak, ‘remember the poor bear! ‘

So it went on, till there was not a single grain left in the pot.

‘What’s to be done now?’ said the woodman; ‘It is all your fault, wife, for eating so much.’

‘My fault!’ retorted his wife scornfully, ‘Why, you ate twice as much as I did!’.

‘Yes, you did !-men always eat more than women.’

‘ Well, it’s no use quarrelling about it now,’ said the woodman, ‘the khichdi’s gone, and the bear will be furious.’

‘That wouldn’t matter much if we could get the wood,’ said the greedy old woman. ‘I’ll tell you what we must do,-we must lock up everything there is to eat in the house, leave the khichdi pot by the fire, and hide in the garret. When the bear comes he will think we have gone out and left his dinner for him. Then he will throw down his bundle and come in. Of course, he will rampage a little when he finds the pot is empty, but he can’t do much mischief, and I don’t think he will take the trouble of carrying the wood away.’

So they made haste to lock up all the food and hide in the garret. Meanwhile, the bear had been toiling and moiling away at his bundle of wood, which took him much longer to collect than he expected; however, at last, he arrived quite exhausted at the woodcutter’s cottage.

Seeing the brass khichdi pot by the fire, he threw down his load and went in. And then-mercy! Wasn’t he angry when he found nothing in it-not even a grain of rice, nor a tiny wee bit of pulse, but only a smell that was so uncommonly nice that he actually cried with rage and disappointment. He flew into the most dreadful temper, but though he turned the house topsy-turvy, he could not find a morsel of food. Finally, he declared he would take the wood away again, but, as the crafty old woman had imagined, when he came to the task, he did not care, even for the sake of revenge, to carry so heavy a burden.

‘I won’t go away empty-handed,’ said he to himself, seizing the khichdi pot; ‘if I can’t get the taste I’ll have the smell!’

Now, as he left the cottage, he caught sight of the beautiful golden pears hanging over into the yard. His mouth began to water at once, for he was desperately hungry, and the pears were the first of the season; in a trice, he was on the wall, up the tree, and, gathering the biggest and ripest one he could find, was just putting it into his mouth, when a thought struck him.

So saying, he began to gather the ripe pears as fast as he could and put them into the khichdi pot, but whenever he came to an unripe one he would shake his head and say, ‘No one would buy that, yet it is a pity to waste it.’ So he would pop it into his mouth and eat it, making wry faces if it was very sour.

Now all this time the woodman’s wife had been watching the bear through a crevice, and holding her breath for fear of discovery; but, at last, what with being asthmatic, and having a cold in her head, she could hold it no longer, and just as the khichdi pot was quite full of golden ripe pears, out she came with the most tremendous sneeze you ever heard: ‘A-h-che-u!’

The bear, thinking someone had fired a gun at him, dropped the khichdi pot into the cottage yard, and fled into the forest as fast as his legs would carry him.

So the woodman and his wife got the khichdi, the wood, and the coveted pears, but the poor bear got nothing but a very bad stomach-ache from eating unripe fruit. 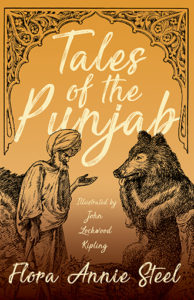 Tales of the Punjab – Illustrated by John Lockwood Kipling

Tales of the Punjab – Told by the People collected by Flora Annie Steel and illustrated by John Lockwood Kipling, is a stunning collection of 43 Eastern folktales to rival ‘The Arabian Nights’, bought to life with Kipling’s intricate black and white illustrations.