Four determined young storks, a spiteful rhyme, and a twisted moral with a dreadful fate.

The text for this story was taken from Fairy Tales by Hans Christian Andersen – Illustrated by Harry Clarke.

On the last house in a little village stood a Stork’s nest. The Mother-Stork sat in it with her four young ones, who stretched out their heads with the pointed black beaks, for their beaks had not yet turned red. A little way off stood the Father-Stork, all alone on the ridge of the roof, quite upright and stiff; he had drawn up one of his legs, so as not to be quite idle while he stood sentry. One would have thought he had been carved out of wood, so still did he stand. He thought, “It must look very grand, that my wife has a sentry standing by her nest. They can’t tell that it is her husband. They certainly think I have been commanded to stand here. That looks so aristocratic!” And he went on standing on one leg.

Below in the street a whole crowd of children were playing; and when they caught sight of the Storks, one of the boldest of the boys, and afterward all of them, sang the old verse about the Storks. But they only sang it just as he could remember it:

“Stork, stork, fly away;
Stand not on one leg to-day.
Thy dear wife is in the nest,
Where she rocks her young to rest.
The first he will be hanged,
The second will be hit,
The third he will be shot,
And the fourth put on the spit.”

“Just hear what those boys are saying!” said the little Stork-children. “They say we’re to be hanged and killed.”

“You’re not to care for that!” said the Mother-Stork. “Don’t listen to it, and then it won’t matter.”

But the boys went on singing, and pointed at the Storks mockingly with their fingers; only one boy, whose name was Peter, declared that it was a sin to make a jest of animals, and he would not join in it at all.

The Mother-Stork comforted her children. “Don’t you mind it at all,” she said; “see how quiet your father stands, though it’s only on one leg.”
“We are very much afraid,” said the young Storks: and they drew their heads far back into the nest.

Now to-day, when the children came out again to play, and saw the Storks, they sang their song:

“Shall we be hanged and beaten?” asked the young Storks.

“No, certainly not,” replied the mother. “You shall learn to fly; I’ll exercise you; then we shall fly out into the meadows and pay a visit to the frogs; they will bow before us in the water, and sing ‘Co-ax! co-ax!’ and then we shall eat them up. That will be a real pleasure.”

“And what then?” asked the young Storks.

“Then all the Storks will assemble, all that are here in the whole country, and the autumn exercises begin: then one must fly well, for that is highly important, for whoever cannot fly properly will be thrust dead by the general’s beak; so take care and learn well when the exercising begins.”

“But then we shall be killed, as the boys say—and only listen, now they’re singing again.”

“Listen to me, and not to them,” said the Mother-Stork. “After the great review we shall fly away to the warm countries, far away from here, over mountains and forests. We shall fly to Egypt, where there are three covered houses of stone, which curl in a point and tower above the clouds; they are called pyramids, and are older than a stork can imagine. There is a river in that country which runs out of its bed, and then all the land is turned to mud. One walks about in the mud, and eats frogs.”

“Oh!” cried all the young ones.

“Yes! It is glorious there! One does nothing all day long but eat; and while we are so comfortable over there, here there is not a green leaf on the trees; here it is so cold that the clouds freeze to pieces, and fall down in little white rags!”

It was the snow that she meant, but she could not explain it in any other way.

“And do the naughty boys freeze to pieces?” asked the young Storks.

“No, they do not freeze to pieces; but they are not far from it, and must sit in the dark room and cower. You, on the other hand, can fly about in foreign lands, where there are flowers, and the sun shines warm.”

Now some time had elapsed, and the nestlings had grown so large that they could stand upright in the nest and look far around; and the Father-Stork came every day with delicious frogs, little snakes, and all kinds of stork-dainties as he found them. Oh! it looked funny when he performed feats before them! He laid his head quite back upon his tail, and clapped with his beak as if he had been a little clapper; and then he told them stories, all about the marshes.

“Listen! now you must learn to fly,” said the Mother-Stork one day; and all the four young ones had to go out on the ridge of the roof. Oh, how they tottered! how they balanced themselves with their wings, and yet they were nearly falling down.

“Only look at me,” said the mother. “Thus you must hold your heads! Thus you must pitch your feet! One, two! one, two! That’s what will help you on in the world.”

Then she flew a little way, and the young ones made a little clumsy leap. Bump!—there they lay, for their bodies were too heavy.

“I will not fly!” said one of the young Storks, and crept back into the nest; “I don’t care about getting to the warm countries.”

“Do you want to freeze to death here, when the winter comes? Are the boys to come and hang you, and singe you, and roast you? Now I’ll call them.”

“Oh, no!” cried the young Stork, and hopped out on to the roof again like the rest.

On the third day they could actually fly a little, and then they thought they could also soar and hover in the air. They tried it, but—bump!—down they tumbled, and they had to shoot their wings again quickly enough. Now the boys came into the street again, and sang their song:

“Shall we fly down and pick their eyes out?” asked the young Storks.

“No,” replied the mother, “let them alone. Only listen to me, that’s far more important. One, two, three!—now we fly round to the right. One, two, three!—now to the left round the chimney! See, that was very good! the last kick with the feet was so neat and correct that you shall have permission to-morrow to fly with me to the marsh! Several nice stork families go there with their young: show them that mine are the nicest, and that you can start proudly; that looks well, and will get you consideration.”

“But are we not to take revenge on the rude boys?” asked the young Storks.

“Let them scream as much as they like. You will fly up to the clouds, and get to the land of the pyramids, when they will have to shiver, and not have a green leaf or a sweet apple.”

“Yes, we will revenge ourselves!” they whispered to one another; and then the exercising went on.

Among all the boys down in the street, the one most bent upon singing the teasing song was he who had begun it, and he was quite a little boy. He could hardly be more than six years old. The young Storks certainly thought he was a hundred, for he was much bigger than their mother and father; and how should they know how old children and grown-up people can be?

Their revenge was to come upon this boy, for it was he who had begun, and he always kept on. The young Storks were very angry; and as they grew bigger they were less inclined to bear it: at last their mother had to promise them that they should be revenged, but not till the last day of their stay.

“We must first see how you behave at the grand review. If you get through badly, so that the general stabs you through the chest with his beak, the boys will be right, at least in one way. Let us see.”

“Yes, you shall see!” cried the young Storks; and then they took all imaginable pains. They practised every day, and flew so neatly and so lightly that it was a pleasure to see them.

Now the autumn came on; all the Storks began to assemble, to fly away to the warm countries while it is winter here. That was a review. They had to fly over forests and villages, to show how well they could soar, for it was a long journey they had before them. The young Storks did their part so well that they got as a mark, “Remarkably well, with frogs and snakes.” That was the highest mark; and they might eat the frogs and snakes; and that is what they did.

“Now we will be revenged!” they said.

“Yes, certainly!” said the Mother-Stork. “What I have thought of will be the best. I know the pond in which all the little mortals lie till the stork comes and brings them to their parents. The pretty little babies lie there and dream so sweetly as they never dream afterward. All parents are glad to have such a child, and all children want to have a sister or a brother. Now we will fly to the pond, and bring one for each of the children who have not sung the naughty song and laughed at the Storks.”

“But he who began to sing—that naughty, ugly boy!” screamed the young Storks; “what shall we do with him?”

“There is a little dead child in the pond, one that has dreamed itself to death; we will bring that for him. Then he will cry because we have brought him a little dead brother. But that good boy—you have not forgotten him, the one who said, ‘It is wrong to laugh at animals!’ for him we will bring a brother and a sister too. And as his name is Peter, all of you shall be called Peter too.”

And it was done as she said; all the Storks were named Peter, and so they are all called even now. 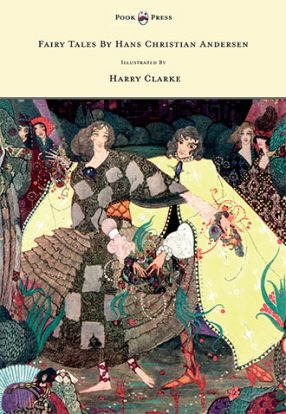