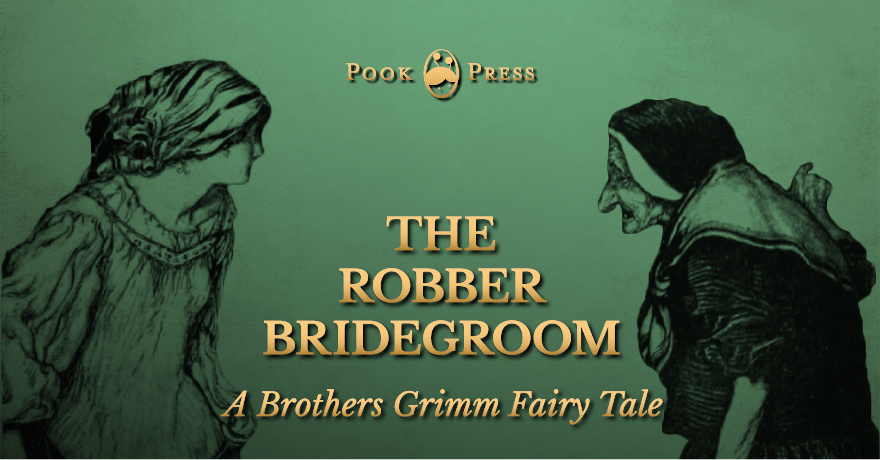 A pocket full of peas, the house of death and a severed finger.

The Robber Bridegroom is one of the Grimm Brothers darkest tales. It is the tale of the daughter of a miller who is betrothed to a suitor. She has a bad feeling about him and tries to avoid him, even thinking about him makes her shudder. When she is finally forced to visit him at home in his creepy house in the darkest depth of the wood, she learns the truth about her future husband and his ‘riotous crew’.

This story has all the makings of a classic horror – dark woods, a gang of murderers, severed body parts and even cannibalism. Read on if you dare…

There was once a Miller, who had a beautiful daughter. When she grew up, he wanted to have her married and settled. He thought, ‘If a suitable bridegroom come and ask for my daughter, I will give her to him.’

Soon after a suitor came who appeared to be rich, and as the Miller knew nothing against him he promised his daughter to him. The Maiden, however, did not like him as a bride ought to like her bridegroom; nor had she any faith in him. Whenever she looked at him, or thought about him, a shudder came over her. One day he said to her, ‘You are my betrothed, and yet you have never been to see me.’

The Maiden answered; ‘I don’t even know where your house is.’

Then the Bridegroom said, ‘My house is in the depths of the forest.’

She made excuses, and said she could not find the way.

The Bridegroom answered: ‘Next Sunday you must come and see me without fail. I have invited some other guests, and, so that you may be able to find the way, I will strew some ashes to guide you.’

When Sunday came, and the Maiden was about to start, she was frightened, though she did not know why. So that she should be sure of finding her way back she filled her pockets with peas and lentils. At the entrance to the forest she found the track of ashes, and followed it; but every step or two she scattered a few peas right and left.

She walked nearly the whole day, right into the midst of the forest, where it was almost dark. Here she saw a solitary house, which she did not like; it was so dark and dismal. She went in, but found nobody, and there was dead silence. Suddenly a voice cried—

‘Turn back, turn hack, thou bonnie Bride,
Nor in this house of death abide.’

The Maiden looked up, and saw that the voice came from a bird in a cage hanging on the wall. Once more it made the same cry—

‘Turn back, turn back, thou bonnie Bride,
Nor in this house of death abide.’

The beautiful Bride went from room to room, all over the house, but they were all empty; not a soul was to be seen. At last she reached the cellar, and there she found an old, old woman with a shaking head. 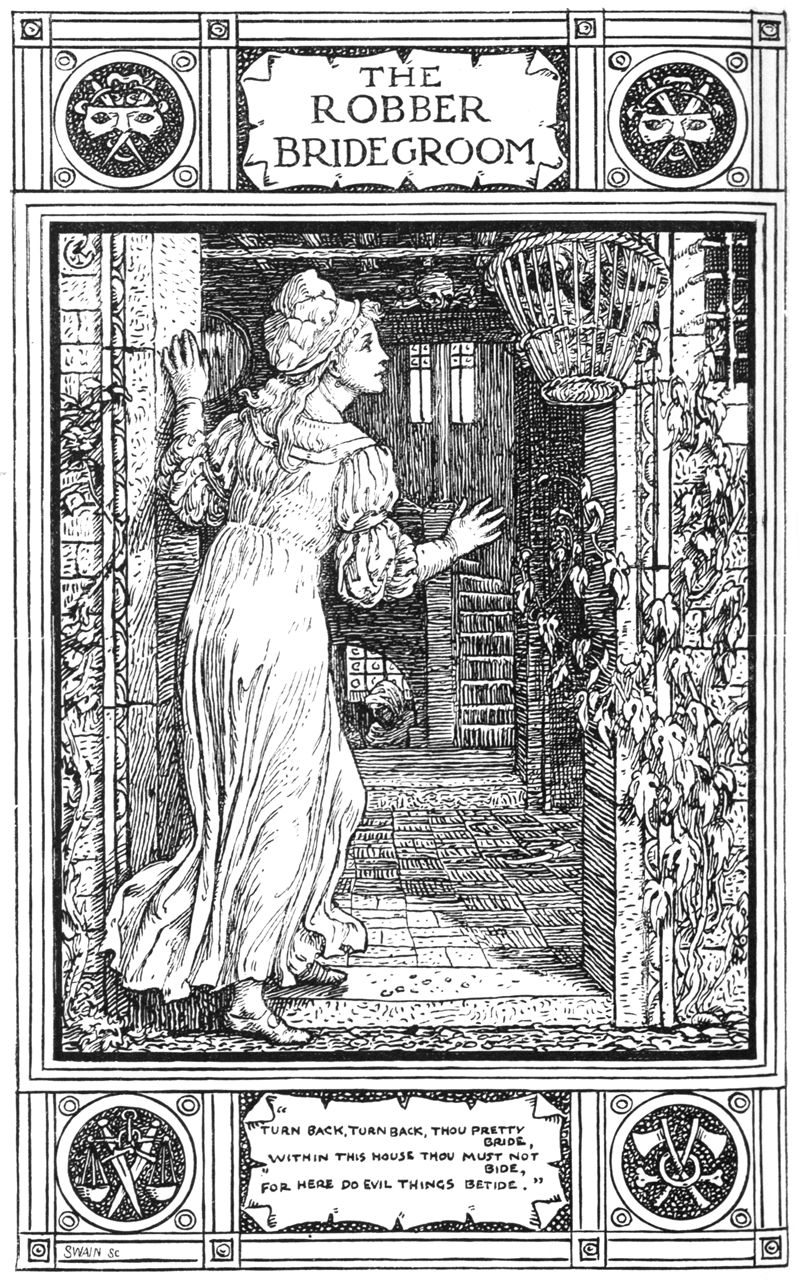 ‘Can you tell me if my Bridegroom lives here?’

‘Alas! poor child,’ answered the old woman, ‘little dost thou, know where thou art; thou art in a murderer’s den. Thou, thoughtest thou wast about to be married, but death will be thy marriage. See here, I have had to fill this kettle with water, and when they have thee in their power they will kill thee without mercy, cook, and eat thee, for they are eaters of human flesh. Unless I take pity on thee and save thee, thou art lost.’ Then the old woman led her behind a great cask, where she could not be seen, ‘Be as quiet as a mouse,’ she said. ‘Don’t stir, or all will be lost. To-night, when the murderers are asleep, we will fly. I have long waited for an opportunity.’

Hardly had she said this when the riotous crew came home. They dragged another maiden with them, but as they were quite drunk they paid no attention to her shrieks and lamentations. They gave her wine to drink, three glasses full—red, white, and yellow. After she had drunk them, she fell down dead. The poor Bride hidden behind the cask was terrified; she trembled and shivered, for she saw plainly to what fate she was destined. 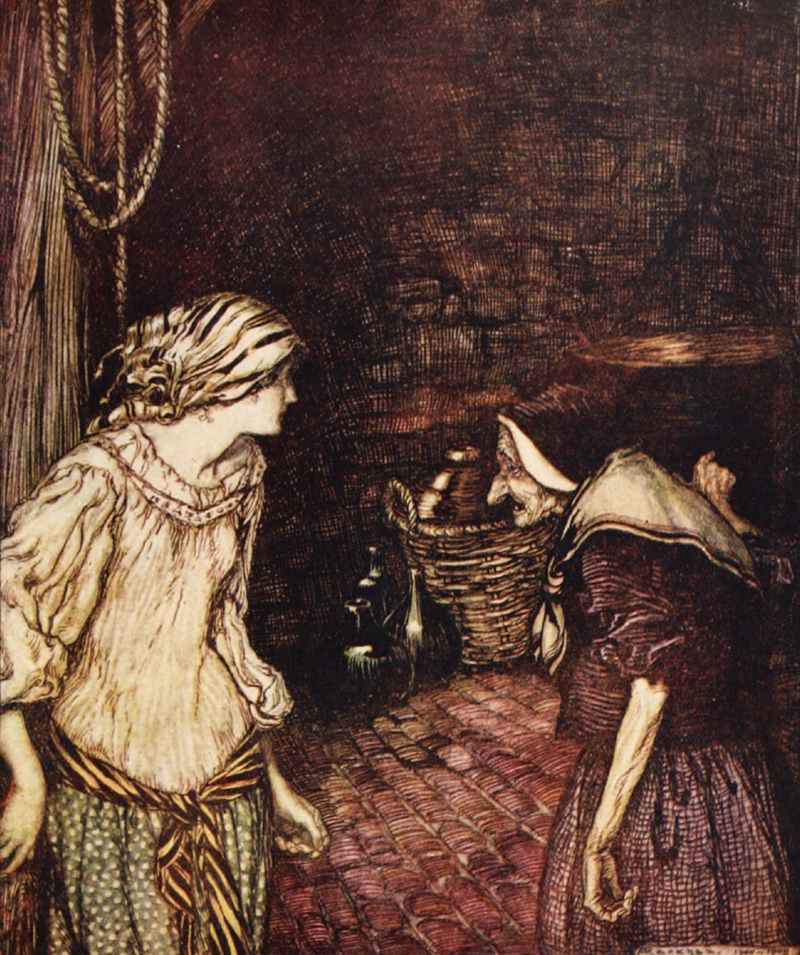 The Robber Bridegroom by Arthur Rackham

One of the men noticed! a gold ring on the little finger of the murdered girl, and as he could not pull it off he took an axe and chopped the finger off; but it sprang up into the air, and fell right into the lap of the Bride behind the cask. The man took a light to look for it, but he could not find it. One of the others said, ‘Have you looked behind the big cask?’

But the old woman called out: ‘Come and eat, and leave the search till to-morrow; the finger won’t run away.’

The murderer said; ‘The old woman is right,’ and they gave up the search and sat down to supper. But the old woman dropped a sleeping draught into their wine, so they soon lay down, went to sleep, and snored lustily.

When the Bride heard them snoring she came out from behind the cask; but she was obliged to step over the sleepers, as they lay in rows upon the floor. She was dreadfully afraid of touching them, but God helped her, and she got through without mishap. The old woman went with her and opened the door, and they hurried away as quickly as they could from this vile den. 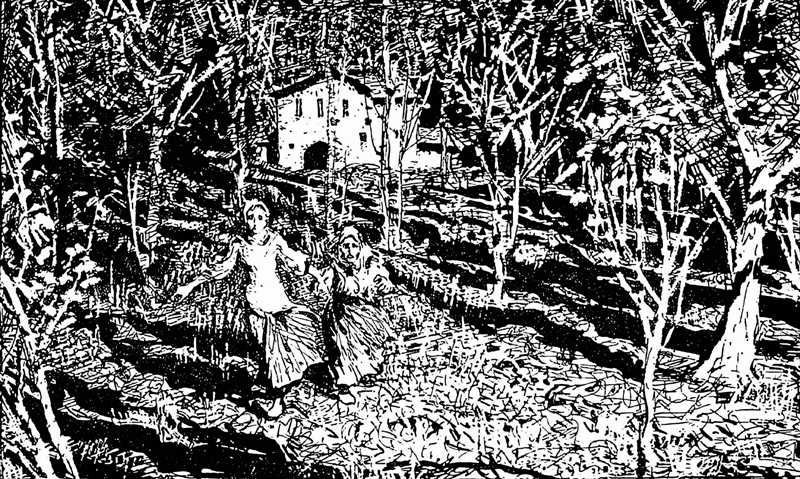 The Robber Bridegroom by Arthur Rackham 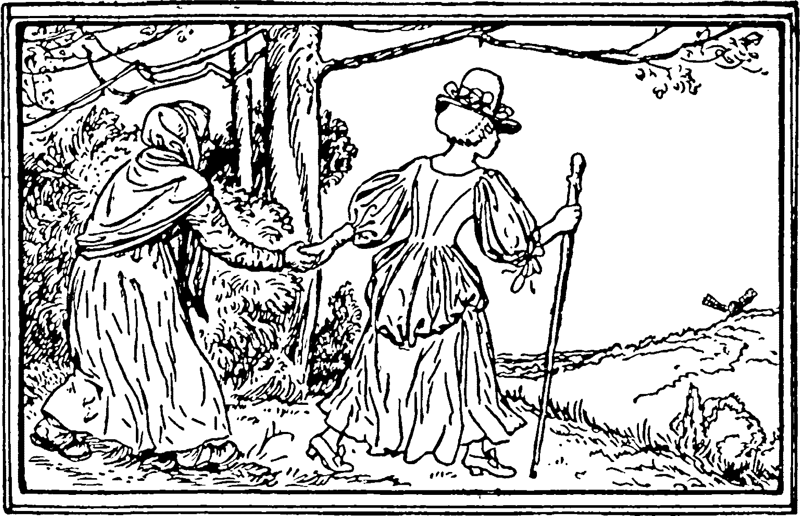 All the ashes had been blown away by the wind, but the peas and lentils had taken root and shot up, and showed them the way in the moonlight.

They walked the whole night, and reached, the mill in the morning. The Maiden told her father all that she had been through.

When the day which had been fixed for the wedding came, the Bridegroom appeared, and the Miller invited all his friends and relations. As they sat at table, each one was asked to tell some story. The Bride was very silent, but when it came to her turn, and the Bridegroom said, ‘Come, my love, have you nothing to say? Pray tell us something,’ she answered:

‘I will tell you a dream I have had. I was walking alone in a wood, and I came to a solitary house where not a soul was to be seen. A cage was hanging on the wall of one of the rooms, and in it there was a bird which cried.—

“Turn back, turn back, thou bonnie Bride,
Nor in this house of death abide,” 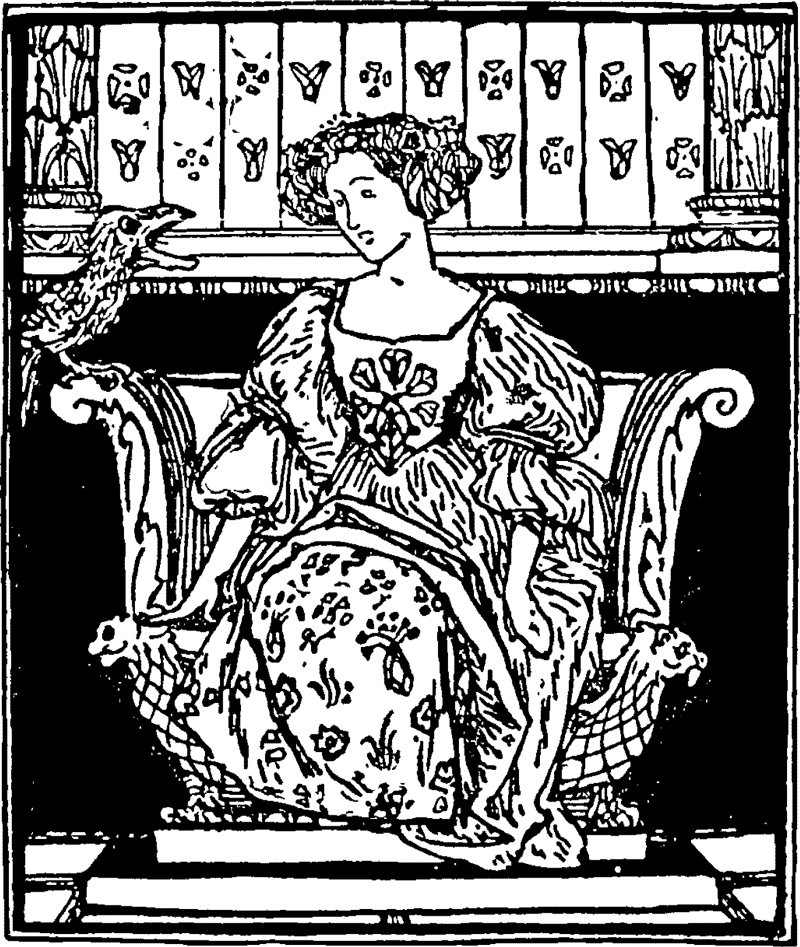 It repeated the same words twice. This was only a dream, my love! I walked through all the rooms, but they were all empty and dismal. At last I went down to the cellar, and there sat a very old woman, with a shaking head. I asked her. “Does my Bridegroom live here?” She answered, “Alas, you poor child, you are in a murderer’s den! Your Bridegroom indeed lives here, but he will cut you to pieces, cook you, and eat you.” This was only a dream, my love. Then the old woman hid me behind a cask, and hardly had she done so when the murderers came home, dragging a maiden with them. They gave her three kinds of wine to drink—red, white, and yellow; and after drinking them she fell down dead. My love, I was only dreaming this! Then they took her things off and cut her to pieces. My love, I was only dreaming! One of the murderers saw a gold ring on the girl’s little finger, and, as he could not pull it off, he chopped off the finger; but the finger bounded into the air, and fell behind the cask on to my lap. Here is the finger with the ring.’

At these words she produced the finger and showed it to the company.

When the Bridegroom heard these words, he turned as pale as ashes, and tried to escape; but the guests seized him and handed him over to justice. And he and all his band were executed for their crimes.