The Last Bee of Summer – An Autumn Story 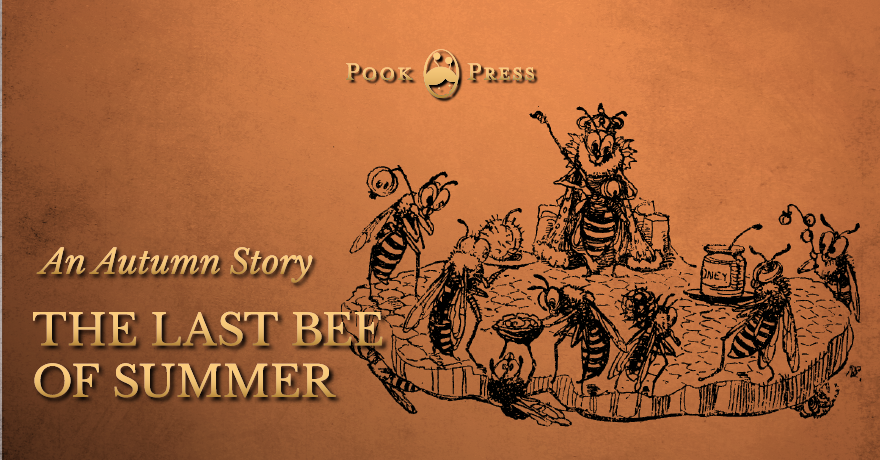 A story of the changing seasons, a mournful peacock butterfly, and a hard-working bee whose end is very near.

This story was taken from Dewdrops from Fairyland – Illustrated by A. Duncan Carse.

The Last Bee of Summer

A BEE lay dying. It was autumn; the beautifully coloured garments Mother Nature had bedecked herself in seemed perfect this year. She had covered the paths with yellow leaves, the oaks she dressed in brown, the Spanish chestnut trees in pink. The soft refreshing rain had fallen and made the grass a lovely green; soon it would be white with winter snow.

The horse-chestnuts fell down from the trees they grew on in numbers, and sank into the mud and slush of the country lanes with the brown beech-leaves, forming a lovely carpet. The Bee could not see all these things as he lay on his back, but he knew about them, for he had been only the day before to see the new autumn clothes of the trees.

And now he could no longer fly about to get the honey from the sweet-smelling flowers or talk to the lazy butterflies! All was over, and his end was very near. He heard a lark singing high above his head. “Ah!” said he, “that bird will also soon fly away and leave me—the swallows and the swifts have gone; their blue coat-tails flew behind them as they journeyed, a whole flock all together; I watched them go, and my heart was sad, for they are bright and pleasant companions.”

Just then a peacock Butterfly flew by. He looked very mournful, his wings drooped and had lost some of their colour. But he pretended to be as well as ever.

“Good-morning, friend Bee,” was his greeting. “Why, dying already? Ah, you see! that’s what comes of working so much! Now, had you played all your life like me, you would have lived much longer!”

“That may be true,” sighed the Bee, “but I would rather work to get honey than waste my time in playing.”

“Well,” answered the Butterfly, “you work entirely for the people in the big house. I often go up to the window and watch them at their meals; the honey-pot stands on the table. They do not think who made the sweet, sticky stuff it contains they like so much, and for all your trouble you are not repaid in any way.”

“Indeed we are,” replied the Bee. “We have a nice hive to live in, and are allowed to eat some of the profits of our labours. Our Queen bee is very kind to us, and I do not think that a happier life than ours could be found.”

“As you refuse to see that you are in the wrong,” said the Butterfly crossly, “I must be gone,” and away he flew.

But the Bee was not to stay alone for long. A Wasp came buzzing by; he too looked as if he had seen better days.

“Ah! you have worked yourself out, I see!” he exclaimed, settling himself on a fallen leaf. “I thought you would from the very first.”

“We must all die,” said the Bee faintly.

“Yes, but had you spent your life in frolic and fun as I have, with now and then a little real hard work, like getting food for the Queen, you would still be alive.”

“I am alive,” answered the Bee.

“You will not be alive much longer, then!” returned the Wasp. “And now I am going to the big house to eat some of the nice stuff you make before it is all finished up, and before the maid comes to clear the tea-things away! Good-bye!” and the Bee saw him no more.

But all this time the Lark was gradually coming down to earth, and it happened that he alighted close to the Bee.

“Ah, poor insect!” he said in a sympathizing tone. “So you will not live much longer! That is a pity, for the trees are all looking so pretty now. Did you hear my new song that I have just made? Now listen!” And he flew up again until he appeared only as a little speck against the blue sky. Then he began to sing. His song told of all the joy of the Heaven above, the place of rest so longed for by the Human Soul. The Bee listened, and found in it peace and comfort.

“Ah, well!” he said as he died, “this world is a beautiful place! Far more beautiful still would it be if everybody was content!”. 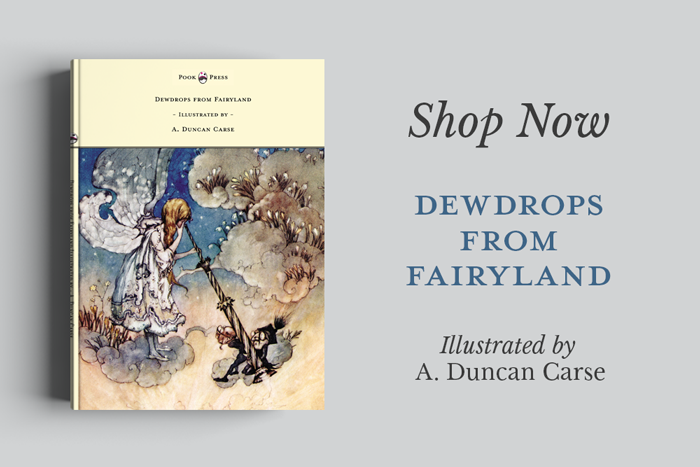