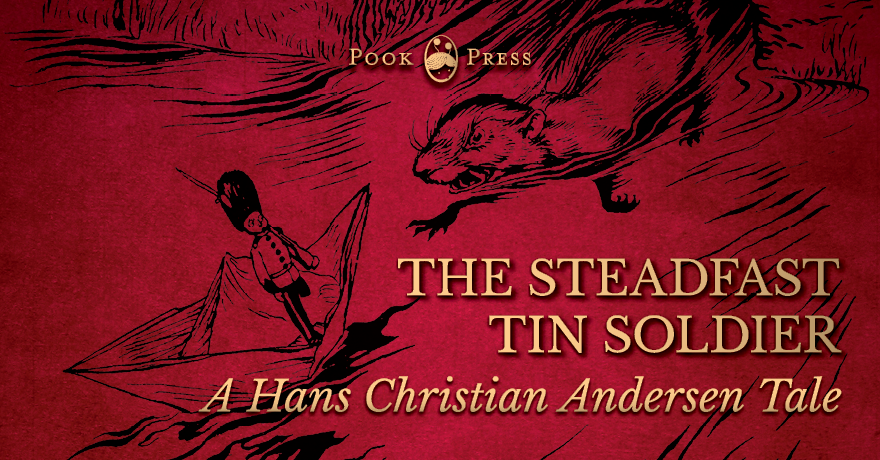 The Steadfast Tin Soldier story was first published in October of 1838, in Andersen’s Fairy Tales Told to Children: New Collection, First Booklet. It appeared alongside stories ‘The Daisy’ and ‘The Wild Swans’, but went on to prove far more popular than both these tales, and is today amongst Andersen‘s best-known works. Interestingly, it was the first tale he penned that had neither a literary model nor a folk tale source. It is also often seen as autobiographical, with the soldier viewed as embodying Andersen‘s awkwardness around women and alienation from society.

The Steadfast Tin Soldier was adapted as early as 1934, as a Cinecolor cartoon. It featured perhaps most famously in Disney’s Fantasia (2000), during which a version of the tale is set to set to the first movement of the Piano Concerto No. 2 in F Major by Dmitri Shostakovich. Revolutionary at the time of its publication due to its lack of moralising, the tale is now seen by academics as paradigmatic of the ‘literary folk tale’.

There were once five-and-twenty tin soldiers, who were all brothers, as they were cast from an old tin spoon. They all carried their guns on their shoulders and looked straight forward, and they all had the same smart uniform, red and blue. The first words which they heard upon seeing the light of day, when the lid was taken off the box in which they were packed, were, “Tin soldiers!” These words were uttered by a little boy who had received them as a birthday present, and clapped his hands for joy; he then put them in rank and file on the table. One soldier looked exactly like another: only one, who had been cast last of all, when there was not enough tin left, was not like his brothers, for he had only one leg; nevertheless, he stood just as firmly on his one leg as the others on two; and he was the very one who became famous.

On the table where they were placed were many other toys; but what caught the eye most of all was a pretty castle of paper. Through its little windows one could look into the rooms. Before the castle stood little trees round a clear lake, which was made by a little looking-glass. Swans made of wax were swimming on it and were reflected in it. All this was very pretty, but the prettiest of all was a little lady who stood in the open door of the castle; she was cut out of paper, but she had a frock of the whitest muslin on, and a piece of narrow blue ribbon was fixed on her shoulders like a scarf, and on it was fixed a glittering tinsel rose, as large as her whole face. The little lady stretched out both arms, for she was a dancer; and as she had lifted one leg high up, so that the tin soldier could not see it, he thought she had only one leg like himself. 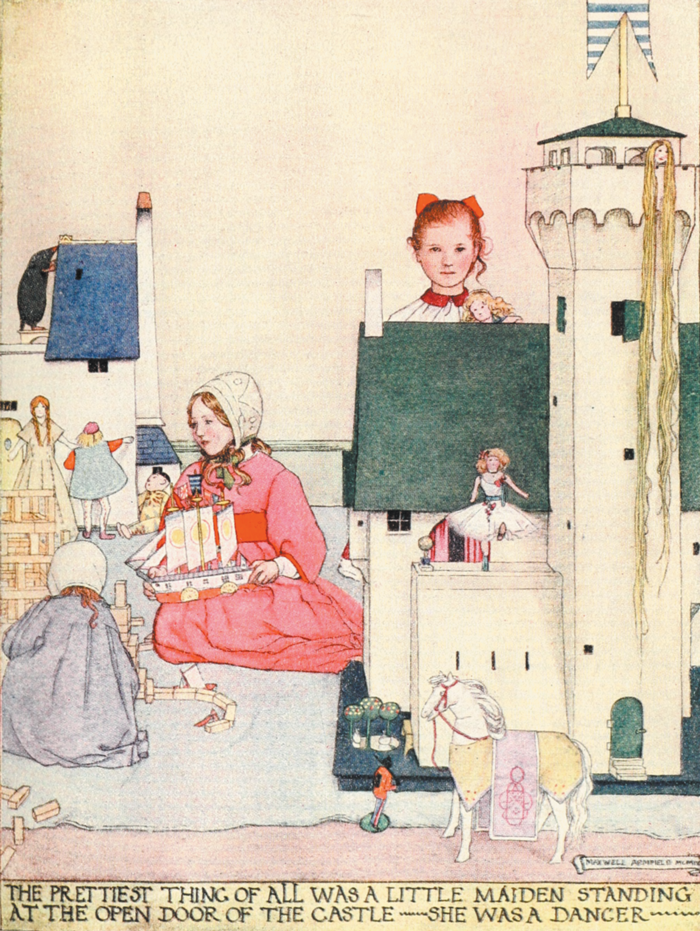 “That’s the wife for me,” he thought; “but she is very grand; she lives in a castle, while I have only a box, which I share with four-and-twenty; that is no place for her. But I must make her acquaintance.” And then he laid himself at full length behind a snuff-box which was on the table; there from his place he could see the little dainty lady, who continued to stand on one leg without losing her balance.

At night all the other tin soldiers were put back into their box, and the people of the house went to bed. Now the toys began to play, to pay visits, to make war, and to go to balls. The tin soldiers rattled in their box, for they wished to take part in the games, but they could not raise the lid. The nutcrackers turned somersaults, the slate-pencil amused itself on the slate; they made so much noise that the canary woke up and began to talk, and even in verse. The tin soldier and the dancer were the only ones who remained in their places. She was standing on tiptoe with her arm stretched out; he stood firmly on his one leg, never taking his eyes away from her for a moment. When the clock struck twelve suddenly the lid of the snuff-box flew open; there was no snuff in it, but a small black troll, a jack-in-the-box, who did the trick.

“Tin soldier,” said the troll, “will you keep your eyes to yourself?”

The tin soldier pretended not to hear it.

“All right; wait till to-morrow,” said the troll.

When morning came and the children were up the tin soldier was placed on the window-sill; all at once, whether it was the troll or the draught, the window flew open and the soldier fell headlong down into the street from the third story. That was a terrible fall! With his one leg in the air, he stood on his helmet, while his bayonet stuck in the ground between the paving stones. The servant and the little boy came down at once to look for him; but although they were so close to him that they almost trod upon him, they did not find him. If the tin soldier had cried out, “Here I am!” they would surely have found him; but he did not consider it proper to call out aloud, because he was in uniform.

Then it began to rain, first very little, but soon more, till it became a heavy shower. When the rain had ceased two street boys came by.

So they made a boat out of a piece of newspaper, put the tin soldier in it, and let him float down the gutter; both the boys ran by the side and clapped their hands. Heaven preserve us! What waves there were in the gutter, and such a strong current too, for the rain had been pouring down in torrents. The paper boat rocked up and down; sometimes it turned round so quickly that the tin soldier trembled; but he remained firm, he did not move a muscle, and looked straight forward, holding his gun on his shoulder. All at once the boat was driven into a long drain, and there it became as dark as it had been in his box.

“Where am I going to?” he thought. “This is the fault of the black troll. Ah! if only the little lady sat here with me in the boat, then I should not mind how dark it was.”

Then there came a big water-rat which lived in the drain.

“Have you got a pass?” asked the rat. “Give me your pass!

But the tin soldier kept silent and held his gun tighter than before. The boat rushed on; the rat followed, gnashing its teeth, and crying out to the chips of wood and straws: “Stop him, stop him! He has not paid the toll! he has not shown his pass!” 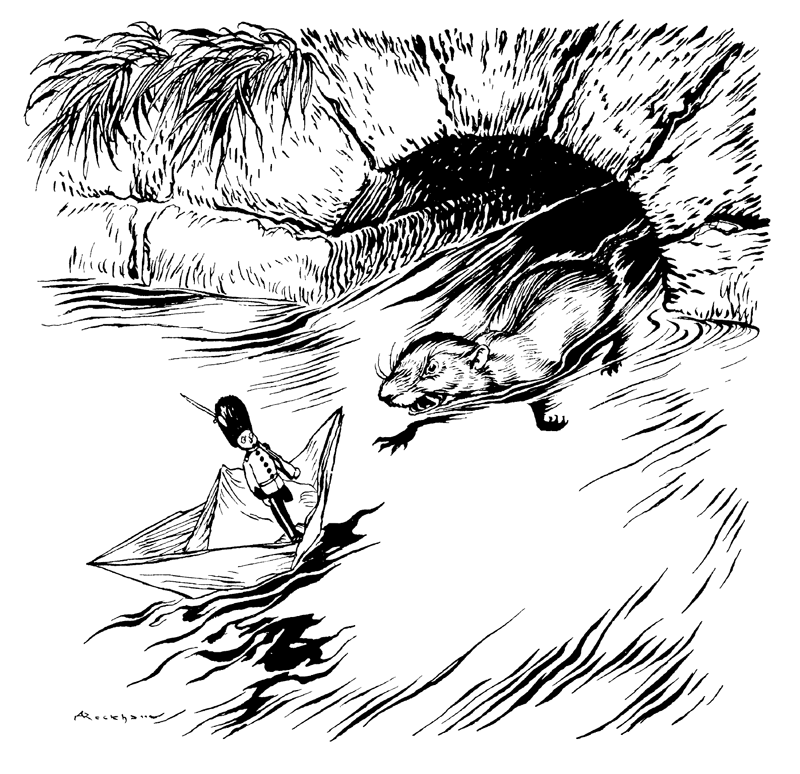 The current became stronger and stronger; the tin soldier could already see the light of day where the drain ended; but he also heard a roaring noise, strong enough to frighten a brave man. Just think: there, where the drain ended, the water rushed into a big canal, for him as dangerous as for us to be carried over a big waterfall. He was already so close to it that to stop was impossible. The boat dashed on; the poor tin soldier held himself as stiff as he could; nobody could say of him that he had blinked an eye. The boat rapidly whirled round three or four times, and was filled with water to the very brim; it must sink. The tin soldier stood up to his neck in water; deeper and deeper sank the boat, more and more soaked became the paper; then the water closed over the soldier’s head. He thought of the sweet little dancer whom he should never see again, and there sounded in his ear:

Farewell, soldier, true and brave,
Nothing now thy life can save.

Then the paper boat fell to pieces, and the tin soldier, sinking into the water, was snapped up by a big fish.

It was very dark indeed inside the fish, much darker than in the drain, and it was awfully narrow too, but the tin soldier remained firm, and lay down full length, holding his gun firmly on his shoulder.

The fish rushed about and made the most extraordinary movements; at last it became quiet; it seemed as if a flash of lightning passed through it, the broad daylight appeared, and a voice shouted, “The tin soldier!” The fish had been caught and taken to market; there it had been sold and brought to the kitchen, where the cook had just cut it open with a big knife. With two fingers she took the tin soldier round the middle, and carried him upstairs, to show everybody the wonderful man who had been travelling about in a fish’s stomach; but the tin soldier was not proud. They put him on the table, and there—what strange things happen in this world!—he was in the self-same room where he had been before! He saw the same children and the same toys were on the table; there was also the pretty castle, with the dear little dancer. She stood still on one leg and held the other high up in the air: she too was steadfast. The tin soldier was very much touched, and he nearly shed tin tears, but that was not becoming for a soldier. He looked at her, but said nothing.

Suddenly one of the little boys took up the tin soldier and threw him into the stove, without giving any reason for this strange conduct! Again it must have been the fault of the troll in the snuffbox! The tin soldier stood there in the strong light and felt an unbearable heat, but whether this heat was caused by the real fire or by love he did not know. His colours had vanished, but nobody could say if that happened during his journey or if grief was the cause of it. He looked at the little lady and she looked at him, and he felt that he was melting, but still he stood upright with his gun in his arm. All at once a door flew open, the wind took the dancer and she flew like a sylph into the stove to the tin soldier, blazed up, and was gone in a moment. The tin soldier melted down into a lump, and when the servant cleared out the cinders next morning she found him in the shape of a little tin heart. Of the little dancer only the tinsel rose was left, and that was burnt as black as coal. 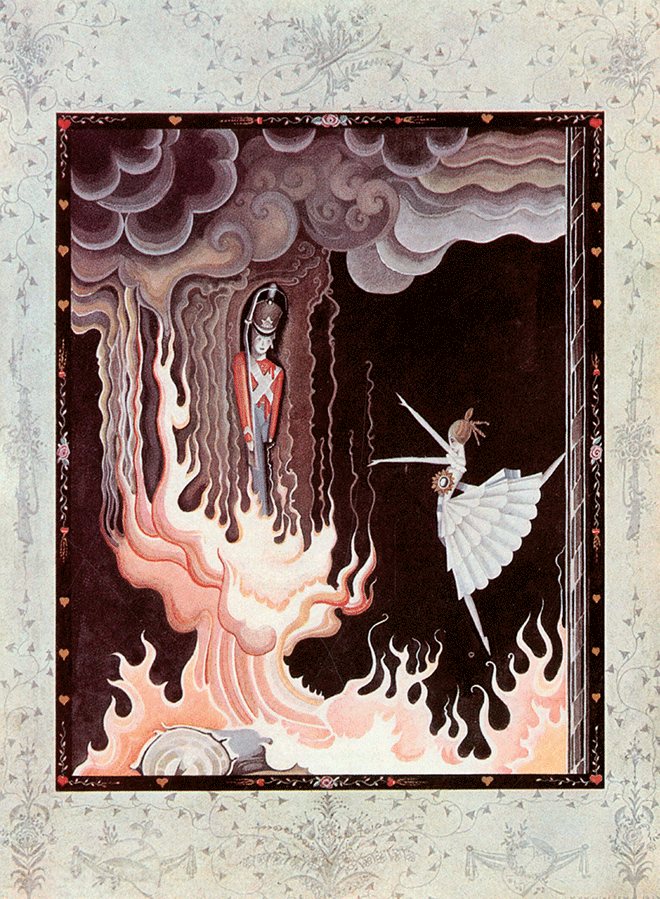 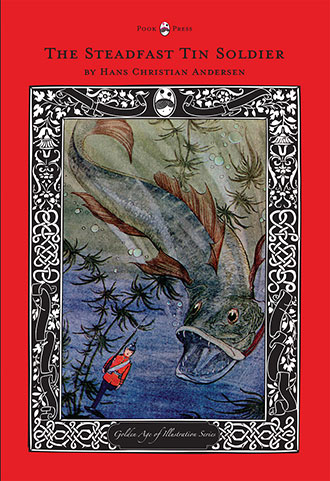