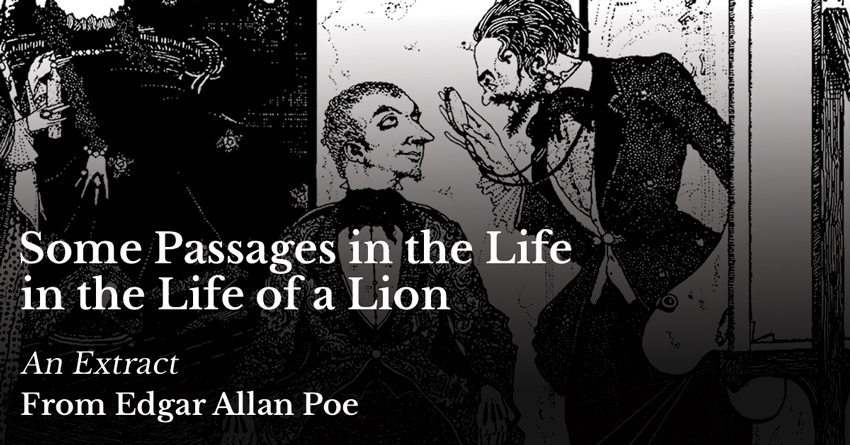 Best known for his tales of mystery and the macabre, Poe was one of the earliest American practitioners of the short story and is generally considered the inventor of the ‘detective fiction’ genre. To celebrate his birthday, we’re sharing an extract from his Tales of Mystery and Imagination, accompanied by a bewitching illustration from Harry Clarke. Some Passages in the Life of a Lion (Lionizing) is a peculiar short story about a young man and his fascination with noses, especially his own…

SOME PASSAGES IN THE LIFE OF A LION (LIONIZING)

Upon their ten toes in wild wonderment.

I AM-that is to say I was a great man; but I am neither the author of Junius nor the man in the mask; for my name, I believe, is Robert Jones, and I was born somewhere in the city of Furn-Fudge.

The first action of my life was the taking hold of my nose with both hands. My mother saw this and called me a genius:-my father wept for joy and presented me with a treatise on Nosology. This I mastered before I was breeched.

I now began to feel my way in the science, and soon came to understand that, provided a man had a nose sufficiently conspicuous, he might, by merely following it, arrive at a Lionship. But my attention was not confined to theories alone. Every morning I gave my proboscis a couple of pulls and swallowed a half-dozen of drams.

When I came of age my father asked me, one day, if I would step with him into his study.

“My father,” I answered,” it is the study of Nosology.”

” A nose, my father,” I replied, greatly softened, ” has been variously defined by about a thousand different authors.” [Here I pulled out my watch.] “It is now noon or thereabouts-We shall have time enough to get through with them all before midnight. To commence then:The

-” Will do, Robert,” interrupted the good old gentleman. ” I am thunderstruck at the extent of your information-I am positively-upon my soul.” [Here he closed his eyes and placed his hand upon his heart.] ” Come here.” [Here he took me by the arm.] ” Your education may

now be considered as finished-it is high time you should scuffle for yourself-and you cannot do a better thing than merely follow your noseso-so-so-” [Here he kicked me downstairs and out of the door.] -” so get out of my house and God bless you! “

As I felt within me the divine afflatus, I considered this accident rather fortunate than otherwise. I resolved to be guided by the paternal advice. I determined to follow my nose. I gave it a pull or two upon the spot and wrote a pamphlet on Nosology forthwith.

All Furn-Fudge was in an uproar.

“What can he be? “said big Miss Bas-Bleu.

“Where can he be? ” said little Miss Bas-Bleu.-But I paid these people no attention whatever-I just stepped into the shop of an artist.

The Duchess of Bless-my-soul was sitting for her portrait; the  Marquis of So-and-So was holding the Duchess’ poodle; the Earl of This-and-That was flirting with her salts; and his Royal Highness of Touchme-Not was leaning upon the back of her chair.

I approached the artist and turned up my nose. 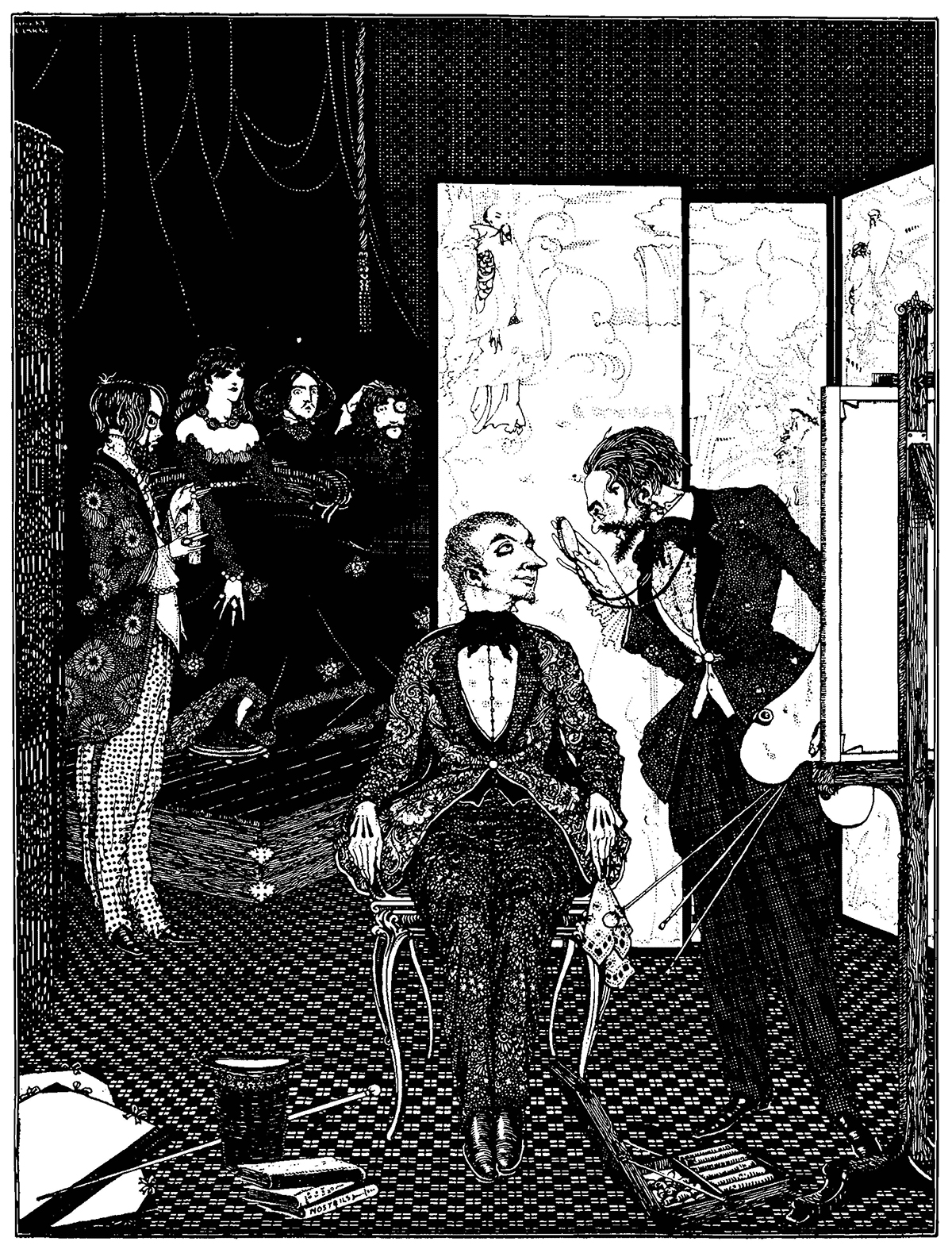 ‘”Has no copy been taken?” he demanded, surveying it through a microscope’

” For his nose!” shouted her Grace.

” A thousand pounds,” said I, sitting down.

“A thousand pounds,” said I.

” Do you warrant it ? ” he asked, turning the nose to the light.

” Is it quite original ? ” he inquired, touching it with reverence.

. “Has no copy been taken? ” he demanded, surveying it through a

” Admirable! ” he ejaculated, thrown quite off his guard by the beauty of the manoeuvre.

“A thousand pounds,” said I.

” A thousand pounds?” said he.

“You shall have them,” said he, “what a piece of virtú! “- So he drew me a cheque upon the spot, and took a sketch of my nose.

This collection, Tales of Mystery and Imagination encompasses twenty-nine of Poe’s finest stories – comprising all the terrifying and bewildering narratives that typify his work. It includes: ‘Morella’, ‘Ligeia’, ‘The Murders in Rue Morgue’, ‘The Masque of Red Death’, ‘The Black Cat’ and many others.