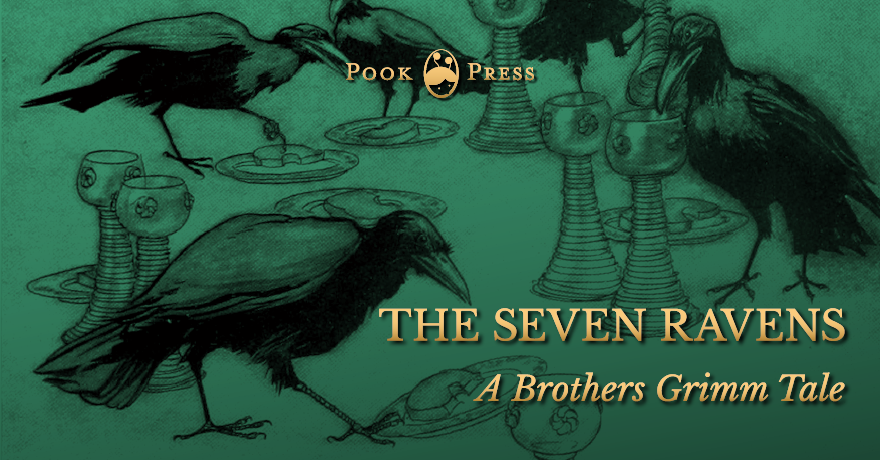 The story of a wish come true, a brave and bold sister, and an adventure to the glass mountain.

THERE was once a Man who had seven sons, but never a daughter, however much he wished for one.

At last, however, he had a daughter.

His joy was great, but the child was small and delicate, and, on account of its weakness, it was to be christened at home.

The Father sent one of his sons in haste to the spring to fetch some water; the other six ran with him, and because each of them wanted to be the first to draw the water, between them the pitcher fell into the brook.

There they stood and didn’t know what to do, and not one of them ventured to go home.

As they did not come back, their Father became impatient, and said: ‘Perhaps the young rascals are playing about, and have forgotten it altogether.’

He became anxious lest his little girl should die unbaptized, and in hot vexation, he cried: ‘I wish the youngsters would all turn into Ravens!’

Scarcely were the words uttered, when he heard a whirring in the air above his head, and, looking upwards, he saw seven coal-black Ravens flying away.

The parents could not undo the spell, and were very sad about the loss of their seven sons, but they consoled themselves in some measure with their dear little daughter, who soon became strong, and every day more beautiful. 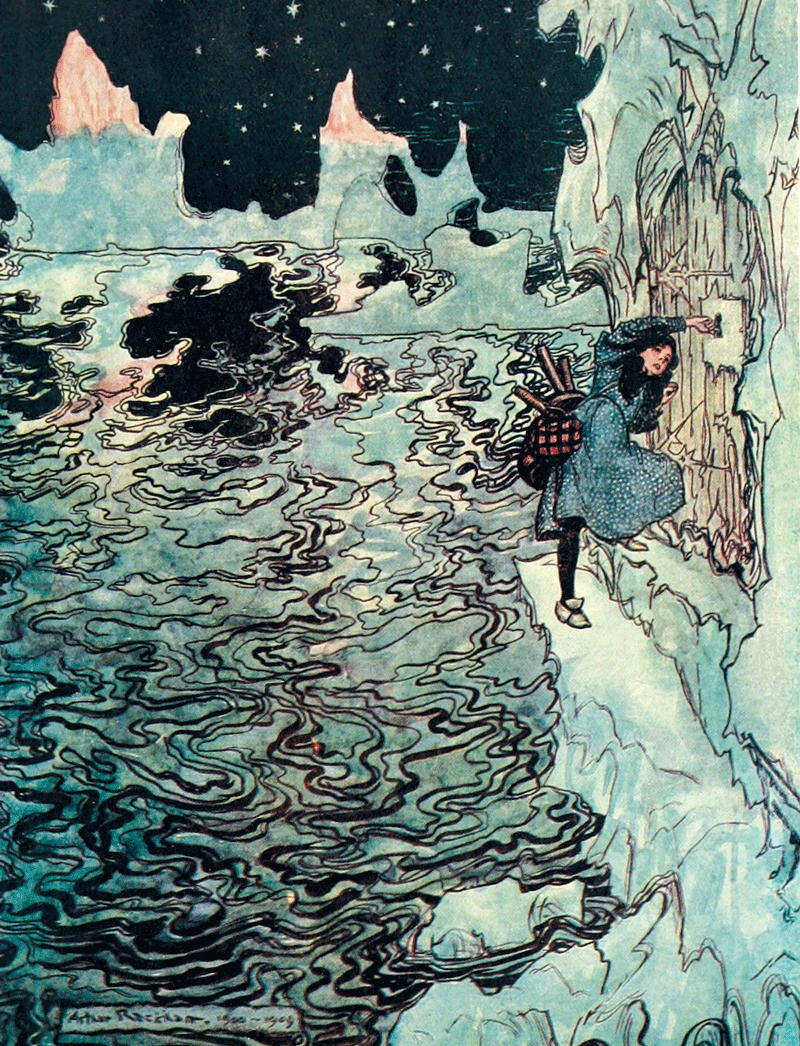 For a long time she was unaware that she had had any brothers, for her parents took care not to mention it.

However, one day by chance she heard some people saying about her: ‘Oh yes, the girl’s pretty enough; but you know she is really to blame for the misfortune to her seven brothers.’

Then she became very sad, and went to her father and mother and asked if she had ever had any brothers, and what had become of them.

The parents could no longer conceal the secret. They said, however, that what had happened was by the decree of heaven, and that her birth was merely the innocent occasion.

But the little girl could not get the matter off her conscience for a single day, and thought that she was bound to release her brothers again. She had no peace or quiet until she had secretly set out, and gone forth into the wide world to trace her brothers, wherever they might be, and to free them, let it cost what it might.

She took nothing with her but a little ring as a remembrance of her parents, a loaf of bread against hunger, a pitcher of water against thirst, and a little chair in case of fatigue. She kept ever going on and on until she came to the end of the world.

Then she came to the Sun, but it was hot and terrible, it devoured little children. She ran hastily away to the Moon, but it was too cold, and, moreover, dismal and dreary. And when the child was looking at it, it said: ‘I smell, I smell man’s flesh!’

Then she quickly made off, and came to the Stars, and they were kind and good, and every one sat on his own special seat.

The girl took the bone, and wrapped it up carefully in a little kerchief, and went on again until she came to the glass mountain.

The gate was closed, and she meant to get out the little bone. But when she undid the kerchief it was empty, and she had lost the good Star’s present.

How, now, was she to set to work? She was determined to rescue her brothers, but had no key to open the glass mountain.

The good little sister took a knife and cut off her own tiny finger, fitted it into the keyhole, and succeeded in opening the lock.

When she had entered, she met a Dwarf, who said: ‘My child, what are you looking for?’

‘I am looking for my brothers, the Seven Ravens,’ she answered.

The Dwarf said: ‘My masters, the Ravens, are not at home; but if you like to wait until they come, please to walk in.’

All at once a whirring and crying were heard in the air; then the Dwarf said: ‘Now my masters the Ravens are coming home.’

Then they came in, and wanted to eat and drink, and began to look about for their little plates and cups.

But they said one after another: ‘Halloa! who has been eating off my plate? Who has been drinking out of my cup? There has been some human mouth here.’

And when the seventh drank to the bottom of his cup, the ring rolled up against his lips.

He looked at it, and recognised it as a ring belonging to his father and mother, and said: ‘God grant that our sister may be here, and that we may be delivered.’ 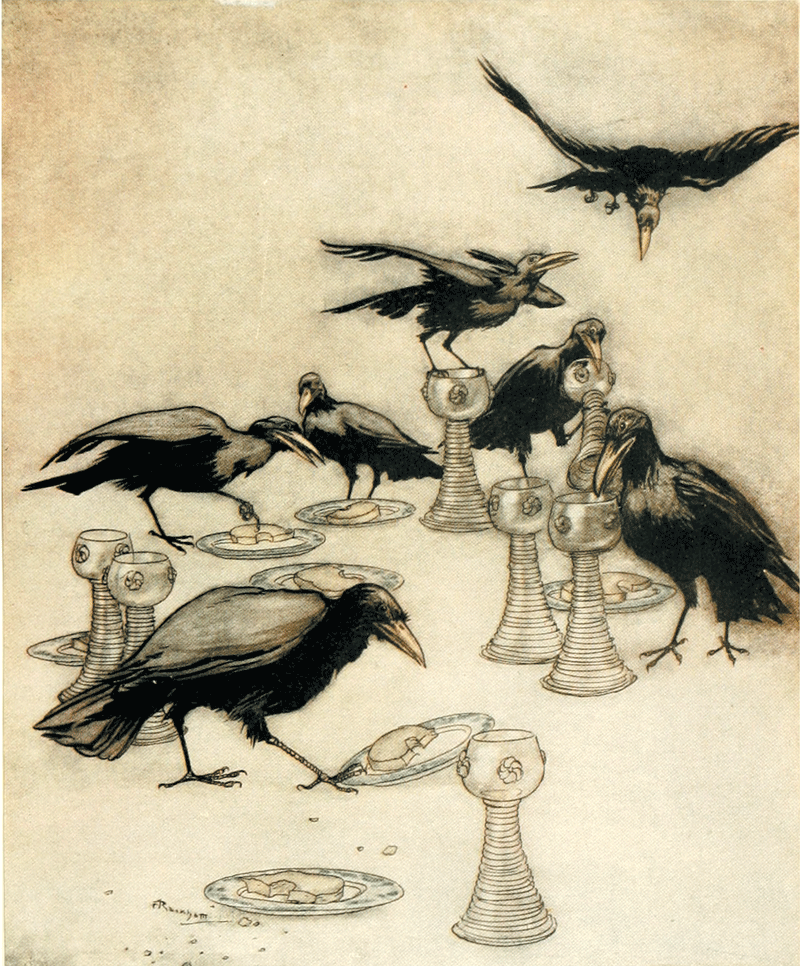 As the maiden was standing behind the door listening, she heard the wish and came forward, and then all the Ravens got back their human form again.

And they embraced and kissed one another, and went joyfully home. 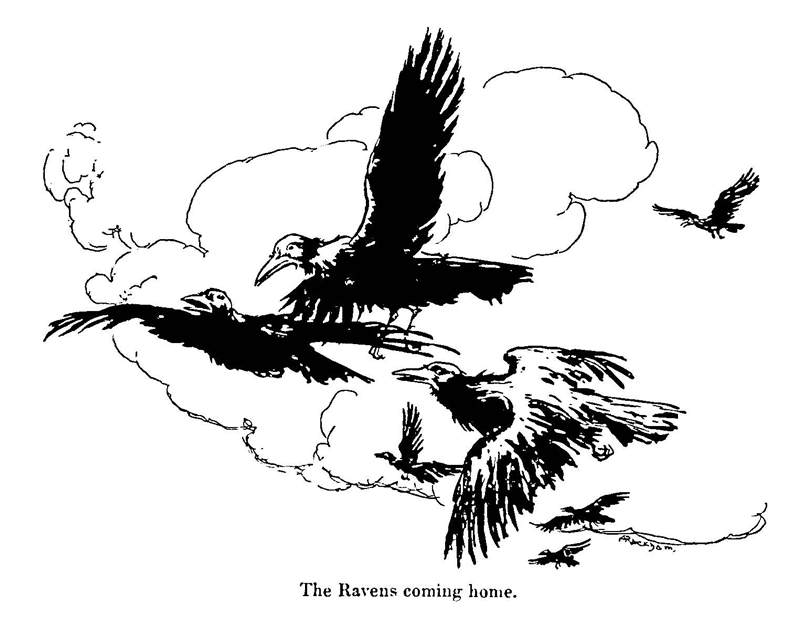 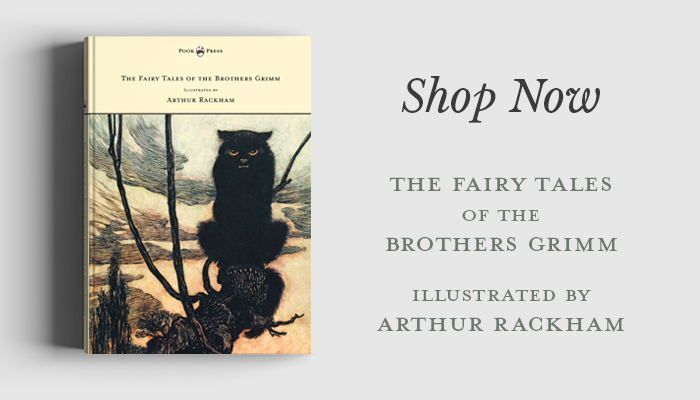