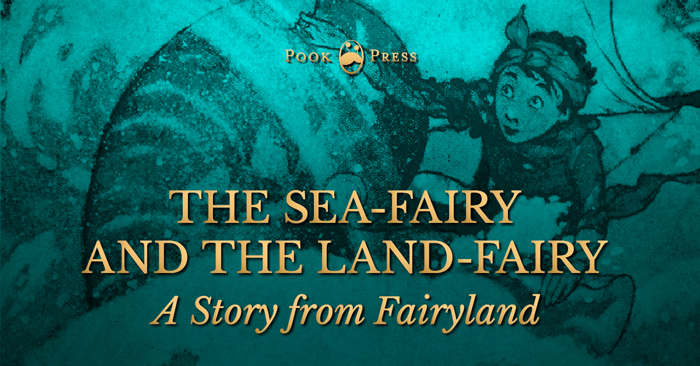 Two quarrelling fairies, a sleepy anemone, and a rainbow in a shell.

And How They Quarrelled

– A Story from Fairy Land –

“I am really sorry for you,” said the sea-fairy. “It must be very unpleasant to live up on that cliff. It is so dangerous too. You might be blown down at any moment!”

“Ha-ha, how very amusing!” laughed the land-fairy. “Unpleasant, did you say? Dangerous? Not at all, not at all. Now, your life is something too horrible to think of. I am glad it is not my fate to wander for ever on the sea. And as for danger—well, every one knows that the sea is full of dangers.”

“I never heard such nonsense,” said Laughing Sapphire indignantly. “The sea is perfectly safe if you know how to manage your shell.”

“But think of the discomfort of it,” said Sweet-of-the-Mountain. “You never have any peace.”

“And you never have any change,” answered Laughing Sapphire.

“There’s not much change in always looking at the sea—a great dull stretch of water!”

“Dull!” cried Laughing Sapphire angrily. “Dull, did you say? Not half so dull as being mewed up on a rock!”

“And you,” interrupted Laughing Sapphire, “have no glittering spray, and no forests of seaweed, and no creamy foam.”

“You’ve no heather,” said the land-fairy, as if that settled the matter.

“As for you,” cried the sea-fairy, “I can’t think of anything you have got! So there!”

They went on quarrelling in this way for some time, getting more and more angry. At last they agreed upon a very good way of settling the dispute. And this was their plan. Each of them was to go away for a certain length of time. On a particular day they were to meet again on the shore, at the edge of the ripples. Laughing Sapphire was to bring with him three treasures of the sea; and Sweet-of-the-Mountain was to bring three treasures of the land. The fairy whose treasures were the best would be the winner in the quarrel.

“But who will decide which are the best treasures?” asked the land-fairy.

“My friend the sea-anemone lives near here,” said Laughing Sapphire. “As he is partly on land and partly in the sea, he will be able to judge fairly between us. He shall decide.” 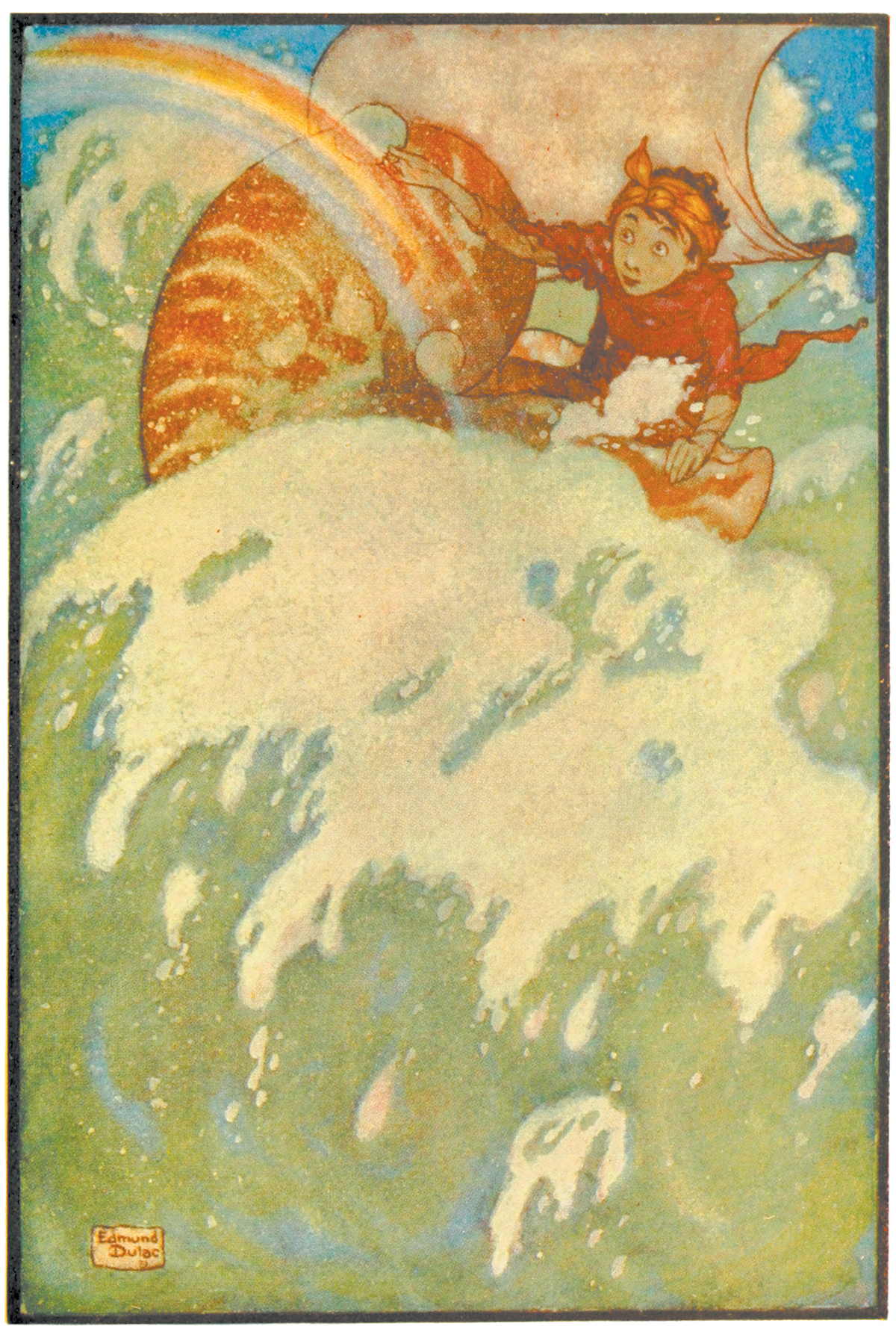 Then the sea-fairy sailed away in his nautilus-shell, and the land-fairy flew home to the heather on the cliff.

Hardly had Laughing Sapphire left the shore when he saw a huge curling wave rolling towards him. The hollow of the wave was like a great green cavern, lit up with magic light; the top of it was sparkling spray. A sunbeam was shining straight down through the spray, and gleaming with every colour you can think of, so that it seemed as if a piece of rainbow had fallen from the sky.

The fairy laughed happily, and steered right into the hollow of the wave, for he knew that his nautilus-boat was safe. In his hand was a little shell. As his boat rode smoothly over the crest of the wave and through the rainbow, he held out the little shell in the beam of coloured light. There was a wonderful change in the shell after it had passed through the rainbow; it was lined with mother-o’-pearl!

The fairy laughed again for joy when he saw the rainbow colours of the little shell.

Then the nautilus-boat sailed on and on across the sea.

The next thing that Laughing Sapphire found was a glowing piece of red seaweed. As he pulled it, dripping, out of the sea, it looked like a bit of broad crimson ribbon; except that no ribbon ever had so much colour and so much light in it. It was so transparent that you could see the sunlight through it, and yet it was as strong as a rope.

As the fairy coiled it round and round he smiled.

“That should please them, I think,” he muttered.

The third thing that Laughing Sapphire found was the best of all. To find it he was obliged to leave his nautilus-boat and dive down to the bottom of the sea. I must not tell you now of all the wonders he saw there, for it would take me too long, and it would be very difficult for me to stop. But when he came to the surface again he was clasping a splendid pearl tightly in his hand.

“If this doesn’t persuade them,” he said, chuckling, “that the sea is the best place in the world, nothing will!”

Meanwhile the land-fairy had been busy too.

First he flew to a beautiful garden, full of roses and verbena and everything sweet. It was a garden he often visited, for many of the flower-fairies there were friends of his. So he knew exactly where to find the sweetest lilies. There were great clumps of them—tall, white lilies with drooping heads and hearts of gold. Sweet-of-the Mountain crept into one of them, and came out with a big, heavy drop of honey. The scent of it was so strong that all the fairies in the garden sniffed joyfully. Then Sweet-of-the-Mountain flew over the wall, and away and away till he came to a wood.

In the wood there was perfect silence. If you had walked there your footsteps would have made no sound, for the ground was soft and springy with moss. There was moss everywhere: moss on the tree-stems and on the stones, and carpets and cushions of moss on the ground. The fairy picked a piece of it—a piece like a soft green feather—and flew off with it out of the wood.

Then he went back to his own hills, where the heather grew right up to the edge of the cliff; for he knew that the best thing of all was to be found there. He saw the hills far away, purple and blue, with here and there a streak of crimson where the sun was shining on the heather. As he came nearer and nearer he grew happier and happier, for a fairy is always happiest in his own country. He picked a sprig from his own tuft of heather; and then he flew down to the shore to meet the sea-fairy at the edge of the ripples.

He found the nautilus-boat lying on the sand, and Laughing Sapphire sitting on a rock talking to the sea-anemone. The fairies nodded to each other.

“This,” said Laughing Sapphire to the sea-anemone, “is the fairy I was speaking of. He declares that it is better to live on land than on the sea. Of course I know better than that! So we have each brought three treasures to show you, that you may decide which of us is right.”

The sea-anemone answered in a very sleepy, drawling voice: for when you spend all your life fastened to the same rock your mind moves rather slowly.

Then Laughing Sapphire showed them his mother-o’-pearl shell.

The sea-anemone waved all his arms about wildly to show that he was pleased.

“And this,” said Laughing Sapphire, unrolling the crimson seaweed, “is a bit of the ribbon that mermaids use for tying their hair.”

“And this,” went on the sea-fairy, showing them the pearl, “is one of the lanterns that the moonlight-fairies use when they dance on the sea.”

Then Laughing Sapphire turned to the land-fairy with an air of triumph.

“Let us see your treasures now,” he said a little contemptuously.

Sweet-of-the-Mountain held out a flower-cup with the drop of honey in it.

It was so sweet that the sea-fairy could not help exclaiming: “Oh, how delicious!”

“That,” said the land-fairy, “is the sweetness of the garden.”

Then he showed them the little green feather of moss.

Then he threw down the sprig of heather.

The two fairies looked at each other silently. Each felt certain that his own treasures were the best.

The sea-anemone’s arms were all waving furiously. He was very much excited, because he knew that the time had come for him to decide which of the two fairies had brought the most beautiful things; and as I told you before, he was not very quick in making up his mind.

“Well?” said Laughing Sapphire impatiently. “What do you think? Is it best to live on the sea or on the land?”

“I think,” said the sea-anemone very slowly, “that the sea is the best place for a sea-fairy.”

“But then, you know,” the sea-anemone went on, “I can’t help thinking that the land is the best place for a land-fairy.”

Then he drew in all his arms and became a little knob of red jelly.

“It is possible,” said Sweet-of-the-Mountain thoughtfully, “that there is some sense in what he says. And yet”—he sniffed happily at his cup of honey—“and yet I don’t believe you have anything at sea as sweet as this.”

“It is certainly a very nice scent,” agreed Laughing Sapphire, “but I do think it would be improved by a little salt.”

Fairies I Have Met is a collection of fairy tales, originally penned by Mrs Rodolph Stawell, accompanied by Edmund Dulac’s splendid colour illustrations. It was written for a little girl named Penelope, ‘so that she may love the fairies, and keep the sunbeam always in her heart.’ In a like manner, it is a text which is sure to delight all its readers – both young and old alike.