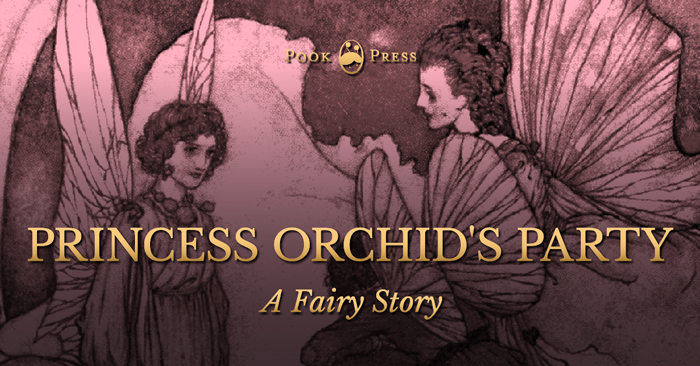 A shy fairy, a party in a glass house, and a new home made among the honeysuckle.

A FAIRY whose name was Hedgeflower once lived in a wild rose at the corner of a field. One day he went out to search for adventures, for most fairies have a great wish for adventures. He wandered on for a long time, sometimes walking and sometimes flying, and sometimes stopping to talk to friends, for the wild-rose-fairies have a great many friends. He crossed several fields in this way, and then he came to a high hedge. He was just thinking of going home when he heard a great buzzing of voices on the other side of the hedge, and as the voices were fairy-voices he was interested at once. Perhaps, he thought, he would find the adventure he was looking for on the other side of the hedge. So he spread his pink-and-white wings and flew over.

It was not surprising that he had heard a great many fairy-voices, for he found himself in a beautiful garden, and all beautiful gardens are, as you know, full of fairies. In this garden there were not only the sorts of fairies that one meets every day, such as rose-fairies and lily-fairies and the quiet little ones that live in mignonette, but there were also all kinds of smartly dressed fairies belonging to strange and splendid flowers. They all seemed to be getting on very well together, for they were all talking loudly about something that interested them very much.

As Hedgeflower dropped down into the middle of the group he felt a little shy. But fairies are as a rule kind and friendly, so a good many voices called out Good-morning to him as he sat down under the shade of a large purple pansy. Then a butterfly whom he had met once or twice before came rustling up to him and began to talk.

“I like this place,” said the butterfly. “One meets so many different kinds of fairies. But don’t sit there. Come and let me introduce you to some of my friends.” Then as they moved away he lowered his voice and went on—

“Those little pansy-fairies are good little things, but they are a bit too thoughtful for me. I find them just a trifle dull, you know. But here is a cousin of yours; I must introduce you.”

Hedgeflower looked round and saw that a beautiful rose-fairy was standing near. She wore flowing robes of two shades of pink, and her appearance was full of dignity.

“Madame La France,” said the butterfly, “may I introduce to you a cousin of your own?”

Madame La France smiled kindly and asked Hedge-flower if he had often been in the garden before. He told her that this was his first visit.

“Then,” she cried, “you must come to the party—you must certainly come to Princess Orchid’s party. She lives over there in the glass house, and she has asked all the fairies in the garden to a party this afternoon. We have been talking about it all day. You must come with me; the Princess will be glad to see any cousin of mine.”

Hedgeflower was delighted. He thought it would be great fun to tell the fairies at home all about it: Meadow-sweet, and that cheeky little Eyebright, and Buttercup who stared at everything one said, and all the honeysuckle-fairies, who were such friends with the wild-rose-fairies because their families had lived close together for so long. Hedgeflower thought that to go to a Princess’s party with his beautiful cousin was a nicer adventure than anything he had expected when he set out for his walk.

Meanwhile all the fairies in the garden were making their way towards the glass house.

“You must keep close to me,” said Madame La France kindly. “The flower in which the Princess lives is some way from the door, and you might be lost in the crowd.”

In another moment Hedgeflower found himself in a scene of the greatest splendour. The glass house was full of flowers, and every flower had of course its own special fairy, and nearly all of them were magnificently dressed and were quite different to any fairies that Hedgeflower knew. The greatest crowd was of course round the beautiful flower in which the Princess Orchid lived, and Hedgeflower and his cousin found it quite difficult to get near the Princess without crushing their wings. They were obliged to walk so slowly that Hedgeflower had plenty of time to look about him. He saw numbers of his cousins the rose-fairies, and tall lily-fairies, and fern-fairies dressed all in green. The pansy-fairies were there too, with their sad little faces and their splendid purple-and-gold dresses. Quite close to him there was a fuchsia-fairy, dressed in a stiff white petticoat with a pointed overskirt of scarlet; and standing beside her were several fairies whose crimson tunics were so fine that Hedgeflower asked who they were.

“They are the young Prince Begonias,” said Madame La France. “The Princess, being a foreigner herself, has a great many foreign friends. The Begonias think a good deal of themselves, but I think myself that our own family has more reason to be proud. But come, we can speak to the Princess now.”

Princess Orchid was standing on a drooping petal of the beautiful flower in which she lived. Her long robes of mauve and white swept over the flower as if they were themselves petals. Her hair was golden, and her face was the loveliest that Hedgeflower had ever seen. She smiled at him very graciously when he was introduced to her, and after he had seen that smile he took no interest in anything else that was going on. He never glanced again at any of the fairies who had seemed to him so splendid a short time before: he just sat down in a nice shady clump of ferns and watched Princess Orchid. He had been to a great many parties in his own hedge where the wild-roses grew, but he had never seen a fairy or even a butterfly receive her guests with so much sweetness and graciousness. He sat there for a long time and wished it could be for ever. Then he remembered that perhaps he would never see Princess Orchid again, and that made him sad.

A fairy party is never dull. Fairies are full of fun and enjoy everything very much. There was a great deal of talking and laughing and sipping of dew flavoured with sunshine, which is the drink fairies like instead of tea. The fairies of the Canterbury Bells had brought their music too, and gave a great deal of pleasure. It seemed as if the party were going to be a great success, when unfortunately a disaster happened which was talked about for many a day afterwards. 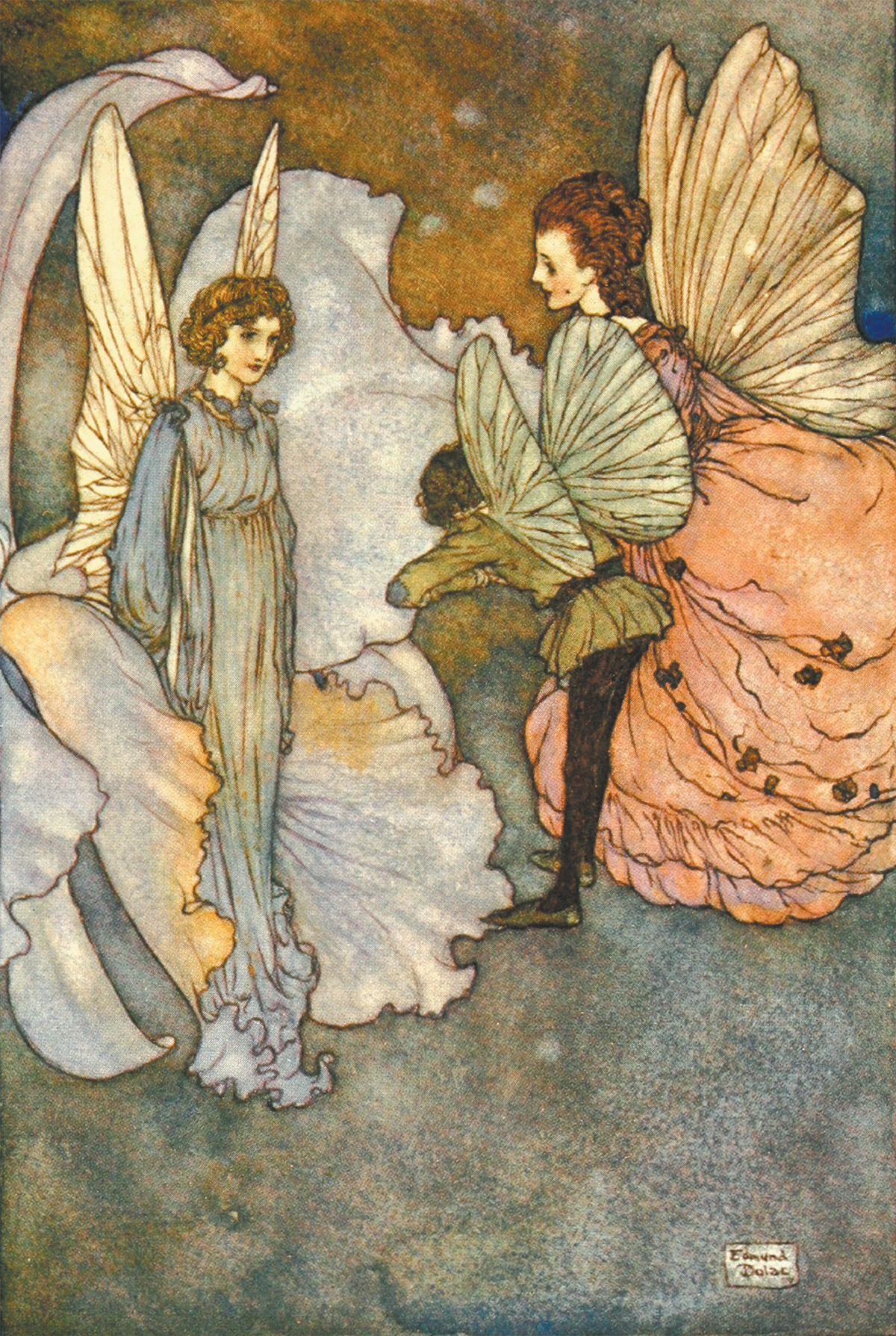 On the roof of the glass house, just above the Princess’s head, there was a large spider who was very busy spinning his web. He was so busy that he did not look where he was going, and when people forget to look where they are going it is a very common thing for accidents to happen. The spider came lower and lower, spinning all the time, while Princess Orchid was talking very kindly to a shy little violet-fairy and was not noticing anything else. Lower and lower, nearer and nearer, came the spider.

Suddenly a shrill little voice was heard to cry out—

“Take care, Princess, take care!” and Hedgeflower, flying from his clump of ferns, flung himself against the great spider. He was too late. Flop! The spider fell with all his weight upon the flower in which the Princess lived!

No flower could bear the weight of such a monster, and to the horror of all the fairies the beautiful mauve orchid trembled and drooped, and then slowly fell to pieces, petal by petal. The Princess spread her dainty wings and flew safely to the ground. Then she turned and looked sadly at the ruin of her home. It lay bruised and crushed and shapeless on the earth, and if once a fairy’s flower-home falls to pieces it can never be put together again.

There was a great commotion in the glass house. All the fairies flew about in a fuss, chattering angrily and trying to find the spider who had done the mischief. But he had quickly climbed up the rope that he had been spinning, and was hiding behind a leaf, so he was never found.

Now, it is a very uncommon thing to find a fairy who is not kind and anxious to help other people, so all the Princess’s guests crowded round her and begged her to come and stay with them. The fuchsia-fairies declared they knew of the loveliest little fuchsia-bud which was in want of some one to take care of it: it would really be a charity if the Princess would live there. Prince Begonia objected to this, because, he said, a fuchsia-bud was not a fit place for the Princess to live in; the right home for her was in one of his magnificent palaces. The lily-fairies cried out that this was all nonsense, because any one could see that the Princess would feel more at home in a white flower than in a red one, after living so long in the pale orchid.

While all this talking was going on the Princess did not seem to be paying very much attention to it, though of course she bowed and smiled and thanked the fairies very prettily, as was only right. She looked round several times, as if she wanted some one who was not there. At last she said—

“Where is the little fairy with the kind face, who tried to save my home?”

The Princess smiled at him, and then she held out her hand.

Hedgeflower dropped on one knee before her.

“My home is in a common hedge,” he said, “and there are thorns round it. But there is no glass between me and the open sky. I think, Princess, that a fairy should be always under the open sky and the sunshine.”

“That,” said the Princess, “is exactly what I think myself.”

So Hedgeflower and the Princess spread their wings and took each other’s hands and flew away out of the window of the glass house, and across the garden and over the hedge. They flew on and on, across field after field, till they came to the hedge with the wild roses.

There the Princess Orchid made her home, among the honeysuckles and the meadowsweet. She was no longer a princess with sweeping robes, but a quiet little wild-rose-fairy in a pink-and-white frock. But there was no glass between her and the sunshine. 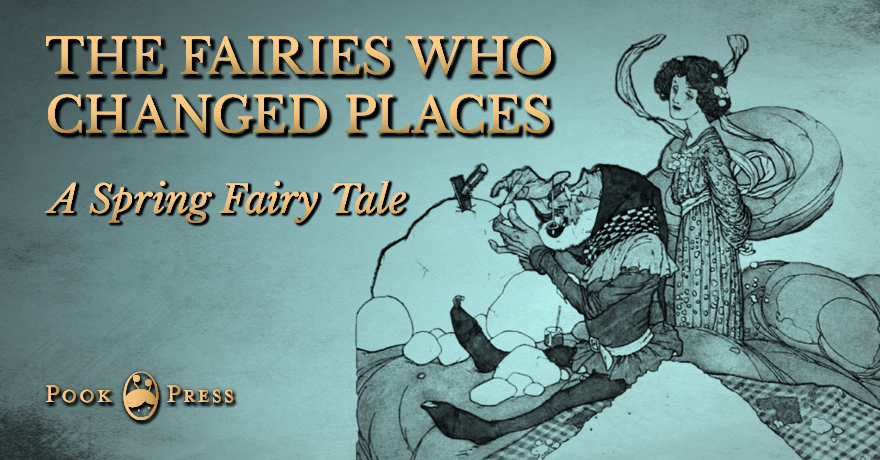 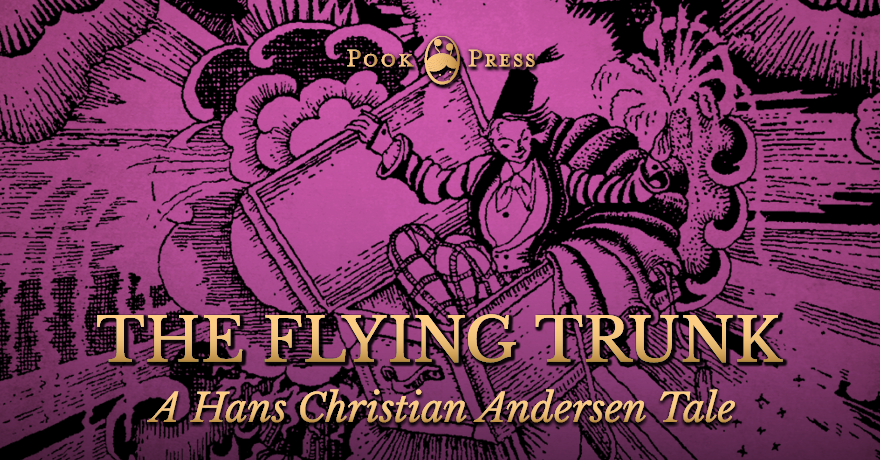