The Story of the Merchant and the Genius 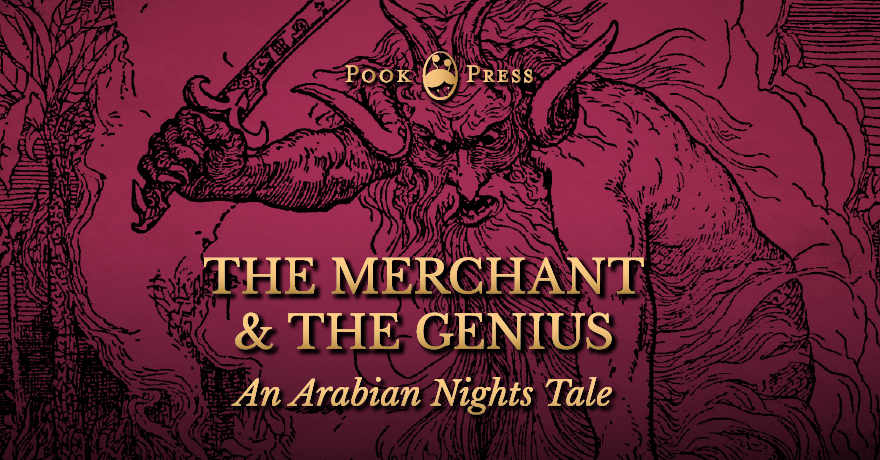 The tale of a wealthy merchant, an avenging Genii

The Story of the Merchant and the Genius is a tale from The Arabian Nights Entertainments. This wonderfully rich and colourful collection of tales, originally known as One Thousand and One Nights from the Middle East and South Asia.

This tale tells of a wealthy merchant who accidentally kills a Genii’s son with date stones. The Genii is very angry and the merchant has to swear his life in return. The time soon comes where the merchant is to be killed and three old men distract the Genii by begging to tell their stories.

This particular version of the tale is from Andrew Lang’s Arabian Nights Entertainments, originally published in 1898. The book was published as part of Lang’s ‘Fairy Books’ series and includes 26 of the original One Thousand and One Nights Stories. The stories are illustrated by H. J. Ford‘s incredible illustrations.

The Merchant and the Genius

Sire, there was once upon a time a merchant who possessed great wealth, in land and merchandise, as well as in ready money. He was obliged from time to time to take journeys to arrange his affairs. One day, having to go a long way from home, he mounted his horse, taking with him a small wallet in which he had put a few biscuits and dates, because he had to pass through the desert where no food was to be got. He arrived without any mishap, and, having finished his business, set out on his return. On the fourth day of his journey, the heat of the sun being very great, he turned out of his road to rest under some trees. He found at the foot of a large walnut-tree a fountain of clear and running water. He dismounted, fastened his horse to a branch of the tree, and sat by the fountain, after having taken from his wallet some of his dates and biscuits. When he had finished this frugal meal he washed his face and hands in the fountain.

When he was thus employed he saw an enormous genius, white with rage, coming towards him, with a scimitar in his hand.

“Arise,” he cried in a terrible voice, “and let me kill you as you have killed my son!”

As he uttered these words he gave a frightful yell. The merchant, quite as much terrified at the hideous face of the monster as at his words, answered him tremblingly, “Alas, good sir, what can I have done to you to deserve death?”

“I shall kill you,” repeated the genius, “as you have killed my son.”

“But,” said the merchant, “how can I have killed your son? I do not know him, and I have never even seen him.”

“When you arrived here did you not sit down on the ground?” asked the genius, “and did you not take some dates from your wallet, and whilst eating them did not you throw the stones about?”

“Yes,” said the merchant, “I certainly did so.”

“Then,” said the genius, “I tell you you have killed my son, for whilst you were throwing about the stones, my son passed by, and one of them struck him in the eye and killed him. So I shall kill you.”

“I will have no mercy on you,” answered the genius. 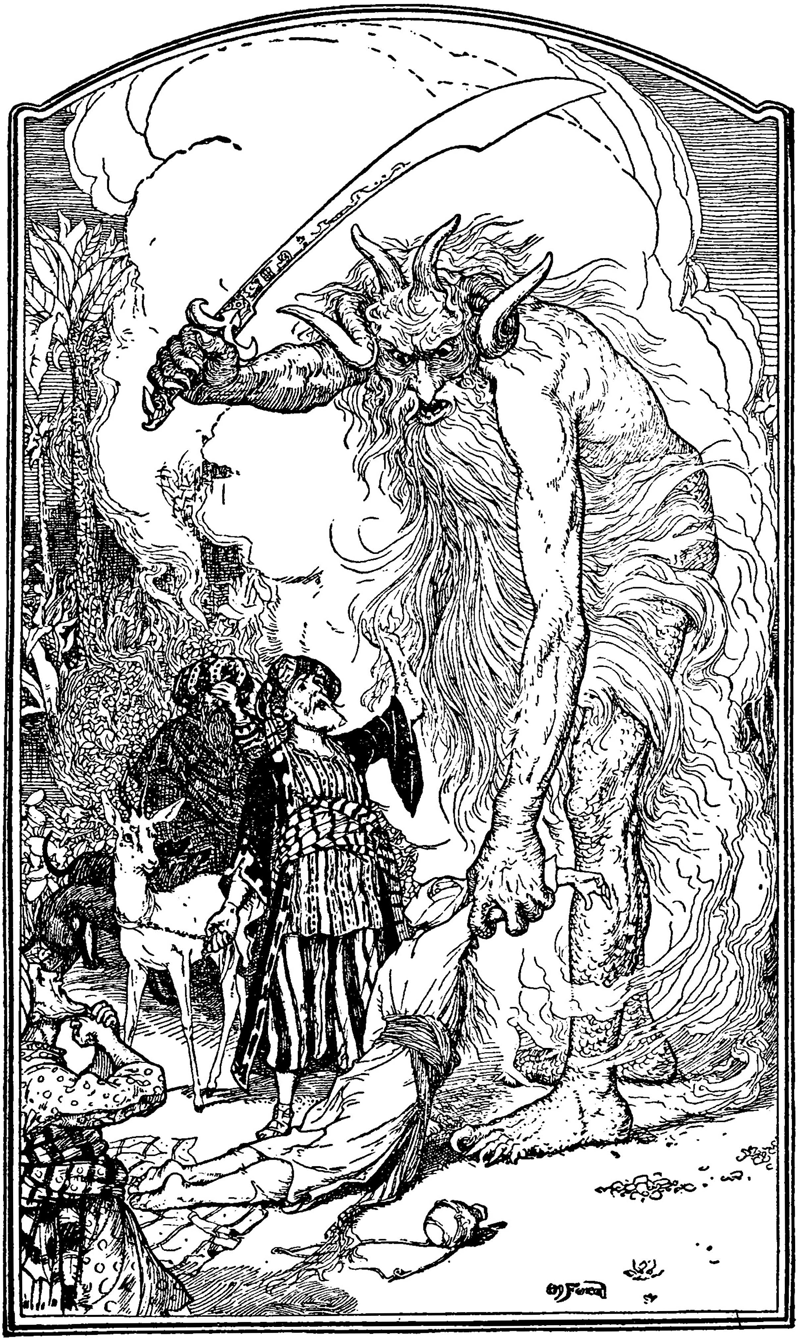 “But I killed your son quite unintentionally, so I implore you to spare my life.”

“No,” said the genius, “I shall kill you as you killed my son,” and so saying, he seized the merchant by the arm, threw him on the ground, and lifted his sabre to cut off his head.

The merchant, protesting his innocence, bewailed his wife and children, and tried pitifully to avert his fate. The genius, with his raised scimitar, waited till he had finished, but was not in the least touched.

Scheherazade, at this point, seeing that it was day, and knowing that the Sultan always rose very early to attend the council, stopped speaking.

“Indeed, sister,” said Dinarzade, “this is a wonderful story.”

“The rest is still more wonderful,” replied Scheherazade, “and you would say so, if the sultan would allow me to live another day, and would give me leave to tell it to you the next night.”

Schahriar, who had been listening to Scheherazade with pleasure, said to himself, “I will wait till to-morrow; I can always have her killed when I have heard the end of her story.”

All this time the grand-vizir was in a terrible state of anxiety. But he was much delighted when he saw the Sultan enter the council-chamber without giving the terrible command that he was expecting.

The next morning, before the day broke, Dinarzade said to her sister, “Dear sister, if you are awake I pray you to go on with your story.”

The Sultan did not wait for Scheherazade to ask his leave. “Finish,” said he, “the story of the genius and the merchant. I am curious to hear the end.”

So Scheherazade went on with the story. This happened every morning. The Sultana told a story, and the Sultan let her live to finish it.

When the merchant saw that the genius was determined to cut off his head, he said: “One word more, I entreat you. Grant me a little delay; just a short time to go home and bid my wife and children farewell, and to make my will. When I have done this I will come back here, and you shall kill me.”

“But,” said the genius, “if I grant you the delay you ask, I am afraid that you will not come back.”

“I give you my word of honour,” answered the merchant, “that I will come back without fail.”

“How long do you require?” asked the genius.

“I ask you for a year’s grace,” replied the merchant. “I promise you that to-morrow twelvemonth, I shall be waiting under these trees to give myself up to you.”

On this the genius left him near the fountain and disappeared.

The merchant, having recovered from his fright, mounted his horse and went on his road.

When he arrived home his wife and children received him with the greatest joy. But instead of embracing them he began to weep so bitterly that they soon guessed that something terrible was the matter.

“Alas!” answered her husband, “I have only a year to live.”

Then he told them what had passed between him and the genius, and how he had given his word to return at the end of a year to be killed. When they heard this sad news they were in despair, and wept much.

The next day the merchant began to settle his affairs, and first of all to pay his debts. He gave presents to his friends, and large alms to the poor. He set his slaves at liberty, and provided for his wife and children. The year soon passed away, and he was obliged to depart. When he tried to say good-bye he was quite overcome with grief, and with difficulty tore himself away. At length he reached the place where he had first seen the genius, on the very day that he had appointed. He dismounted, and sat down at the edge of the fountain, where he awaited the genius in terrible suspense.

Whilst he was thus waiting an old man leading a hind came towards him. They greeted one another, and then the old man said to him, “May I ask, brother, what brought you to this desert place, where there are so many evil genii about? To see these beautiful trees one would imagine it was inhabited, but it is a dangerous place to stop long in.”

The merchant told the old man why he was obliged to come there. He listened in astonishment.

“This is a most marvellous affair. I should like to be a witness of your interview with the genius.” So saying he sat down by the merchant.

While they were talking another old man came up, followed by two black dogs. He greeted them, and asked what they were doing in this place. The old man who was leading the hind told him the adventure of the merchant and the genius. The second old man had not sooner heard the story than he, too, decided to stay there to see what would happen. He sat down by the others, and was talking, when a third old man arrived. He asked why the merchant who was with them looked so sad. They told him the story, and he also resolved to see what would pass between the genius and the merchant, so waited with the rest.

They soon saw in the distance a thick smoke, like a cloud of dust. This smoke came nearer and nearer, and then, all at once, it vanished, and they saw the genius, who, without speaking to them, approached the merchant, sword in hand, and, taking him by the arm, said, “Get up and let me kill you as you killed my son.”

The merchant and the three old men began to weep and groan.

Then the old man leading the hind threw himself at the monster’s feet and said, “O Prince of the Genii, I beg of you to stay your fury and to listen to me. I am going to tell you my story and that of the hind I have with me, and if you find it more marvellous than that of the merchant whom you are about to kill, I hope that you will do away with a third part of his punishment?”

The genius considered some time, and then he said, “Very well, I agree to this.” 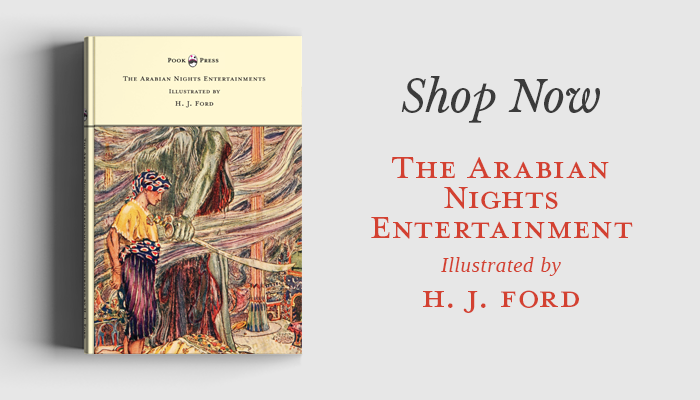 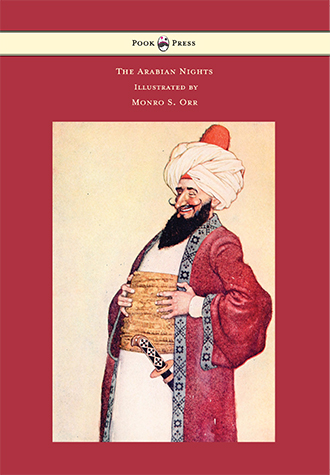