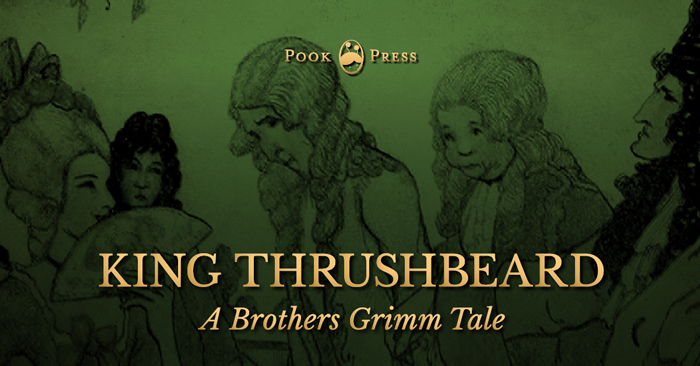 A Picky Princess, a Wandering Musician, and a King Under a Spell

HERE was once a King who had a Daughter. She was more beautiful than words can tell, but at the same time so proud and haughty that no man who came to woo her was good enough for her. She turned away one after another, and even mocked them.

One day her father ordered a great feast to be given, and invited to it all the marriageable young men from far and near.

They were all placed in a row, according to their rank and position. First came Kings, then Princes, then Dukes, Earls, and Barons.

The Princess was led through the ranks, but she had some fault to find with all of them.

One was too stout. ‘That barrel!’ she said. The next was too tall. ‘Long and lean is no good!’ The third was too short. ‘Short and stout, can’t turn about!’ The fourth was too white. ‘Pale as death!’ The fifth was too red. ‘Turkey-cock!’ The sixth was not straight. ‘Oven-dried!’

So there was something against each of them. But she made specially merry over one good King, who stood quite at the head of the row, and whose chin was a little hooked. 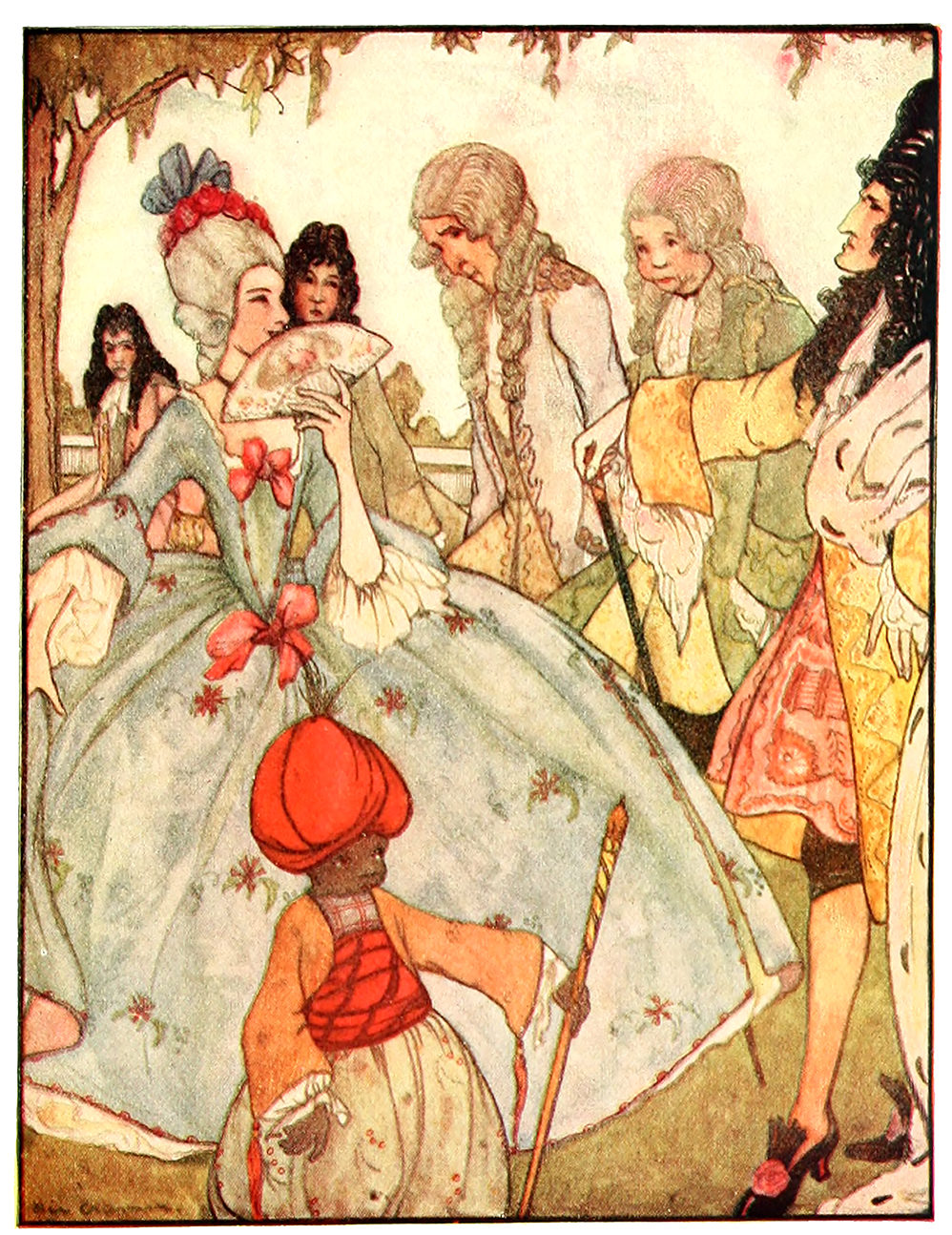 After that, he was always called ‘King Thrushbeard.’

When the old King saw that his Daughter only made fun of them, and despised all the suitors who were assembled, he was very angry, and swore that the first beggar who came to the door should be her husband.

A few days after, a wandering Musician began to sing at the window, hoping to receive charity.

When the King heard him, he said: ‘Let him be brought in.’

The Musician came in, dressed in dirty rags, and sang to the King and his Daughter, and when he had finished, he begged alms of them.

The King said: ‘Your song has pleased me so much, that I will give you my Daughter to be your wife.’

The Princess was horror-stricken. But the King said: ‘I have sworn an oath to give you to the first beggar who came; and I will keep my word.’

No entreaties were of any avail. A Parson was brought, and she had to marry the Musician there and then.

When the marriage was completed, the King said: ‘Now you are a beggar-woman, you can’t stay in my castle any longer. You must go away with your Husband.’

The Beggar took her by the hand and led her away, and she was obliged to go with him on foot.

When they came to a big wood, she asked:

‘Ah! who is the Lord of this forest so fine?’

‘It belongs to King Thrushbeard. It might have been thine,

I would I’d accepted the hand of the King.’

After that they reached a great meadow, and she asked again:

‘Ah! who is the Lord of these meadows so fine?’

‘They belong to King Thrushbeard, and would have been thine,

I would I’d accepted the love of the King.’

Then they passed through a large town, and again she asked:

‘It belongs to King Thrushbeard, and it might have been thine,

I would I’d accepted the heart of the King.’

‘It doesn’t please me at all,’ said the Musician, ‘that you are always wishing for another husband. Am I not good enough for you?’ 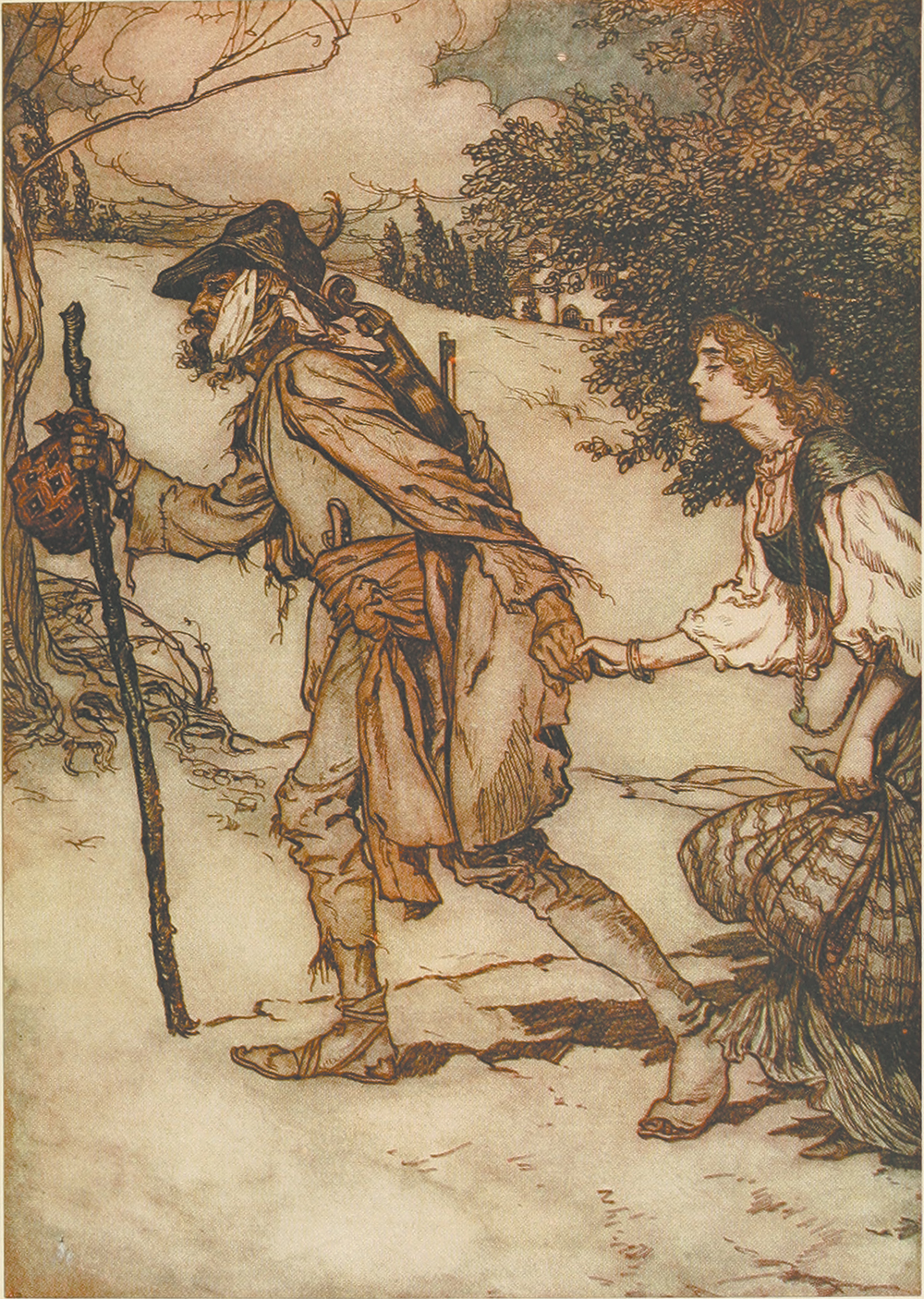 At last they came to a miserable little hovel, and she said:

‘Ah, heavens! what’s this house, so mean and small?

This wretched little hut’s no house at all.’

The Musician answered: ‘This is my house, and yours; where we are to live together.’

The door was so low that she had to stoop to get in.

‘Where are the servants?’ asked the Princess.

‘Servants indeed!’ answered the Beggar. ‘Whatever you want done, you must do for yourself. Light the fire, and put the kettle on to make my supper. I am very tired.’

But the Princess knew nothing about lighting fires or cooking, and to get it done at all, the Beggar had to do it himself.

When they had finished their humble fare, they went to bed. But in the morning the Man made her get up very early to do the housework.

They lived like this for a few days, till they had eaten up all their store of food.

Then the Man said: ‘Wife, this won’t do any longer; we can’t live here without working. You shall make baskets.’

So he went out and cut some osiers, and brought them home. She began to weave them, but the hard osiers bruised her tender hands.

‘I see that won’t do,’ said the Beggar. ‘You had better spin; perhaps you can manage that.’

So she sat down and tried to spin, but the harsh yarn soon cut her delicate fingers and made them bleed.

‘Now you see,’ said the Man, ‘what a good-for-nothing you are. I have made a bad bargain in you. But I will try to start a trade in earthenware. You must sit in the market and offer your goods for sale.’

‘Alas!’ she thought, ‘if any of the people from my father’s kingdom come and see me sitting in the market-place, offering goods for sale, they will scoff at me.’ But it was no good. She had to obey, unless she meant to die of hunger.

The Beggar took her by the hand and led her away

All went well the first time. The people willingly bought her wares because she was so handsome, and they paid what she asked them—nay, some even gave her the money and left her the pots as well.

They lived on the gains as long as they lasted, and then the Man laid in a new stock of wares.

She took her seat in a corner of the market, set out her crockery about her, and began to cry her wares.

Suddenly, a drunken Hussar came galloping up, and rode right in among the pots, breaking them into thousands of bits.

She began to cry, and was so frightened that she did not know what to do. ‘Oh! what will become of me?’ she cried. ‘What will my Husband say to me?’ She ran home, and told him her misfortune.

‘Who would ever think of sitting at the corner of the market with crockery?’ he said. ‘Stop that crying. I see you are no manner of use for any decent kind of work. I have been to our King’s palace, and asked if they do not want a kitchen wench, and they have promised to try you. You will get your victuals free, at any rate.’

So the Princess became a kitchen wench, and had to wait upon the Cook and do all the dirty work. She fixed a pot into each of her pockets, and in them took home her share of the scraps and leavings, and upon these they lived.

It so happened that the marriage of the eldest Princess just then took place, and the poor Woman went upstairs and stood behind the door to peep at all the splendour.

When the rooms were lighted up, and she saw the guests streaming in, one more beautiful than the other, and the scene grew more and more brilliant, she thought, with a heavy heart, of her sad fate. She cursed the pride and haughtiness which had been the cause of her humiliation, and of her being brought to such depths.

Every now and then the Servants would throw her bits from the savoury dishes they were carrying away from the feast, and these she put into her pots to take home with her.

All at once the King’s son came in. He was dressed in silk and velvet, and he had a golden chain round his neck.

When he saw the beautiful Woman standing at the door, he seized her by the hand, and wanted to dance with her.

But she shrank and refused, because she saw that it was King Thrushbeard, who had been one of the suitors for her hand, and whom she had most scornfully driven away.

Her resistance was no use, and he dragged her into the hall. The string by which her pockets were suspended broke. Down fell the pots, and the soup and savoury morsels were spilt all over the floor.

When the guests saw it, they burst into shouts of mocking laughter.

She was so ashamed, that she would gladly have sunk into the earth. She rushed to the door, and tried to escape, but on the stairs a Man stopped her and brought her back.

When she looked at him, it was no other than King Thrushbeard again.

He spoke kindly to her, and said: ‘Do not be afraid. I and the Beggar-Man, who lived in the poor little hovel with you, are one and the same. For love of you I disguised myself; and I was also the Hussar who rode among your pots. All this I did to bend your proud spirit, and to punish you for the haughtiness with which you mocked me.’

She wept bitterly, and said: ‘I was very wicked, and I am not worthy to be your wife.’

But he said: ‘Be happy! Those evil days are over. Now we will celebrate our true wedding.’

The waiting-women came and put rich clothing upon her, and her Father, with all his Court, came and wished her joy on her marriage with King Thrushbeard.

Then, in truth, her happiness began. I wish we had been there to see it, you and I.

Snowdrop and Other Tales was originally published in 1909, and contains a collection of classic fairy tales by the Brothers Grimm – all beautifully illustrated by Arthur Rackham. The stories include: ‘Briar Rose, ‘The Elves and the Shoemaker’, ‘Clever Hans’, ‘The Goosegirl’, ‘The Seven Ravens’, ‘Ashputtel’, ‘Clever Grethel’, and many more.