How the Camel got his Hump 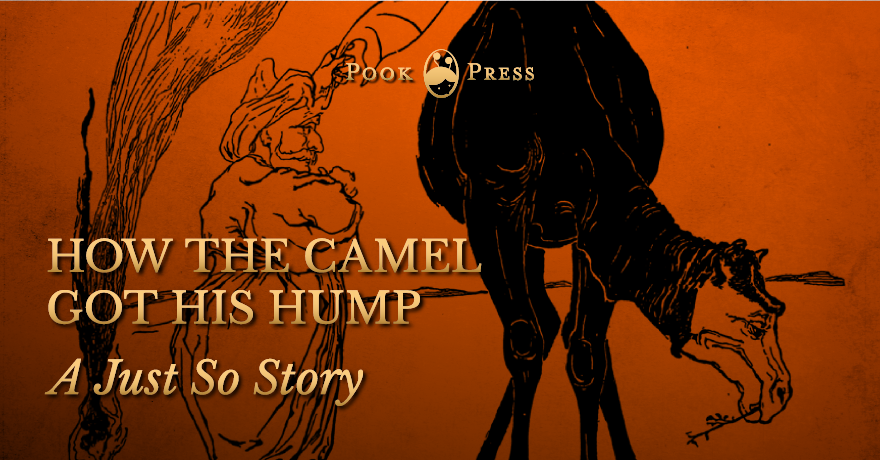 A World so new-and-all, the Djinn of All Deserts and a very lazy camel.

How the Camel Got His Hump is a classic Just So Story from Rudyard Kipling. These fantastically imaginative stories are amongst the best known of Kipling’s works, they offer entertaining explanations as to how animals came into being.

This story starts when the world was so new and all and the animals were just beginning to work. The very lazy camel makes enemies amongst his fellow animal workers who have to work double to make up for him. When the Djinn in charge of All Deserts come by, he reasons with the camel but the camel will not budge. “Humph.” The Djinn of All Deserts is forced to make a Great Magic that brings the humph to the camel.

How the Camel got his Hump

A Just So Story

NOW this is the next tale, and it tells how the Camel got his big hump.

In the beginning of years, when the world was so new and all, and the Animals were just beginning to work for Man, there was a Camel, and he lived in the middle of a Howling Desert because he did not want to work; and besides, he was a Howler himself. So he ate sticks and thorns and tamarisks and milkweed and prickles, most ’scruciating idle; and when anybody spoke to him he said ‘Humph!’ Just ‘Humph!’ and no more.

Presently the Horse came to him on Monday morning, with a saddle on his back and a bit in his mouth, and said, ‘Camel, O Camel, come out and trot like the rest of us.’

‘Humph!’ said the Camel; and the Horse went away and told the Man.

Presently the Dog came to him, with a stick in his mouth, and said, ‘Camel, O Camel, come and fetch and carry like the rest of us.’

‘Humph!’ said the Camel; and the Dog went away and told the Man.

Presently the Ox came to him, with the yoke on his neck and said, ‘Camel, O Camel, come and plough like the rest of us.’

‘Humph!’ said the Camel; and the Ox went away and told the Man.

At the end of the day the Man called the Horse and the Dog and the Ox together, and said, ‘Three, O Three, I’m very sorry for you (with the world so new-and-all); but that Humph-thing in the Desert can’t work, or he would have been here by now, so I am going to leave him alone, and you must work double-time to make up for it.’ 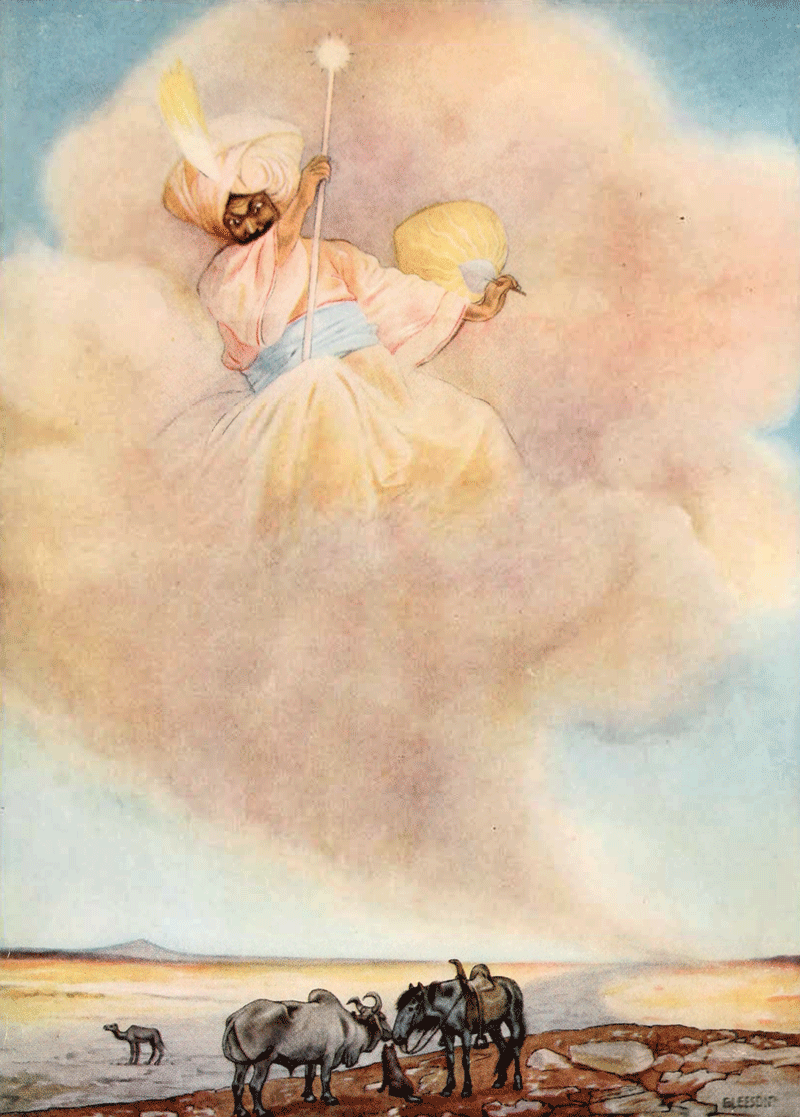 That made the Three very angry (with the world so new-and-all), and they held a palaver, and an indaba, and a punchayet, and a pow-wow on the edge of the Desert; and the Camel came chewing milkweed most ’scruciating idle, and laughed at them. Then he said ‘Humph!’ and went away again.

Presently there came along the Djinn in charge of All Deserts, rolling in a cloud of dust (Djinns always travel that way because it is Magic), and he stopped to palaver and pow-pow with the Three.

‘Djinn of All Deserts,’ said the Horse, ‘is it right for anyone to be idle, with the world so new-and-all?’

‘Certainly not,’ said the Djinn.

‘Well,’ said the Horse, ‘there’s a thing in the middle of your Howling Desert (and he’s a Howler himself) with a long neck and long legs, and he hasn’t done a stroke of work since Monday morning. He won’t trot.’

‘Whew!’ said the Djinn, whistling, ‘that’s my Camel, for all the gold in Arabia! What does he say about it?’

‘Does he say anything else?’

THIS is the picture of the Djinn making the beginnings of the Magic that brought the Humph to the Camel. First, he drew a line in the air with his finger, and it became solid; and then he made a cloud, and then he made an egg—you can see them both at the bottom of the picture—and then there was a magic pumpkin that turned into a big white flame. Then the Djinn took his magic fan and fanned that flame till the flame turned into a magic by itself. It was a good Magic and a very kind Magic really, though it had to give the Camel a Humph because the Camel was lazy. The Djinn in charge of All Deserts was one of the nicest of the Djinns, so he would never do anything really unkind. 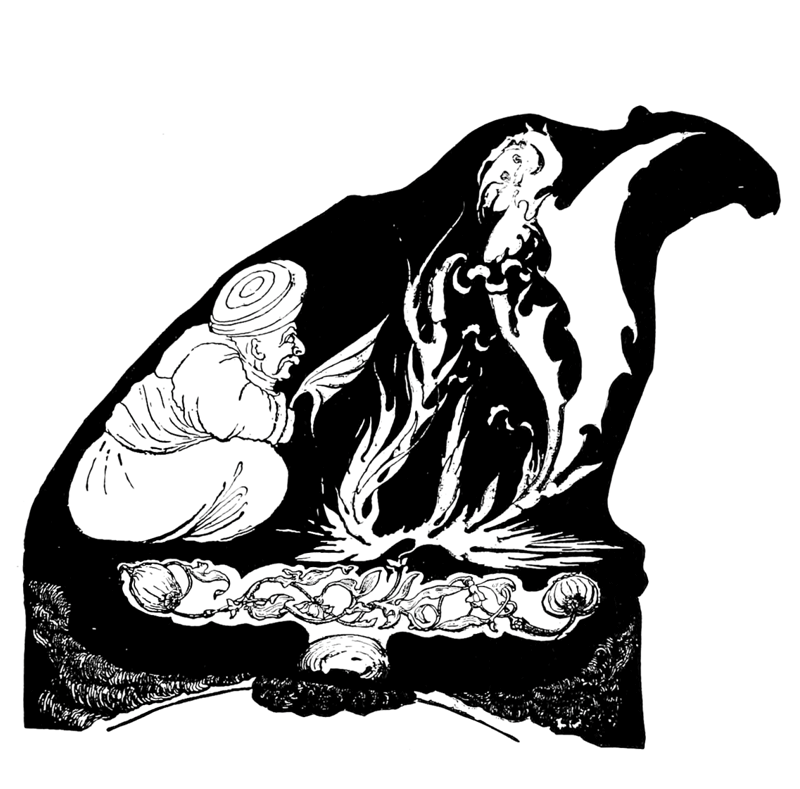 ‘Very good,’ said the Djinn. ‘I’ll humph him if you will kindly wait a minute.’

The Djinn rolled himself up in his dust-cloak, and took a bearing across the desert, and found the Camel most ’scruciatingly idle, looking at his own reflection in a pool of water.

‘My long and bubbling friend,’ said the Djinn, ‘what’s this I hear of your doing no work, with the world so new-and-all?’

The Djinn sat down, with his chin in his hand, and began to think a Great Magic, while the Camel looked at his own reflection in the pool of water.

‘You’ve given the Three extra work ever since Monday morning, all on account of your ’scruciating idleness,’ said the Djinn; and he went on thinking Magics, with his chin in his hand.

‘I shouldn’t say that again if I were you,’ said the Djinn; ‘you might say it once too often. Bubbles, I want you to work.’

And the Camel said ‘Humph!’ again; but no sooner had he said it than he saw his back, that he was so proud of, puffing up and puffing up into a great big lolloping humph.

HERE is the picture of the Djinn in charge of All Deserts guiding the Magic with his magic fan. The camel is eating a twig of acacia, and he has just finished saying “humph” once too often (the Djinn told him he would), and so the Humph is coming. The long towelly-thing growing out of the thing like an onion is the Magic, and you can see the Humph on its shoulder. The Humph fits on the flat part of the Camel’s back. The Camel is too busy looking at his own beautiful self in the pool of water to know what is going to happen to him. 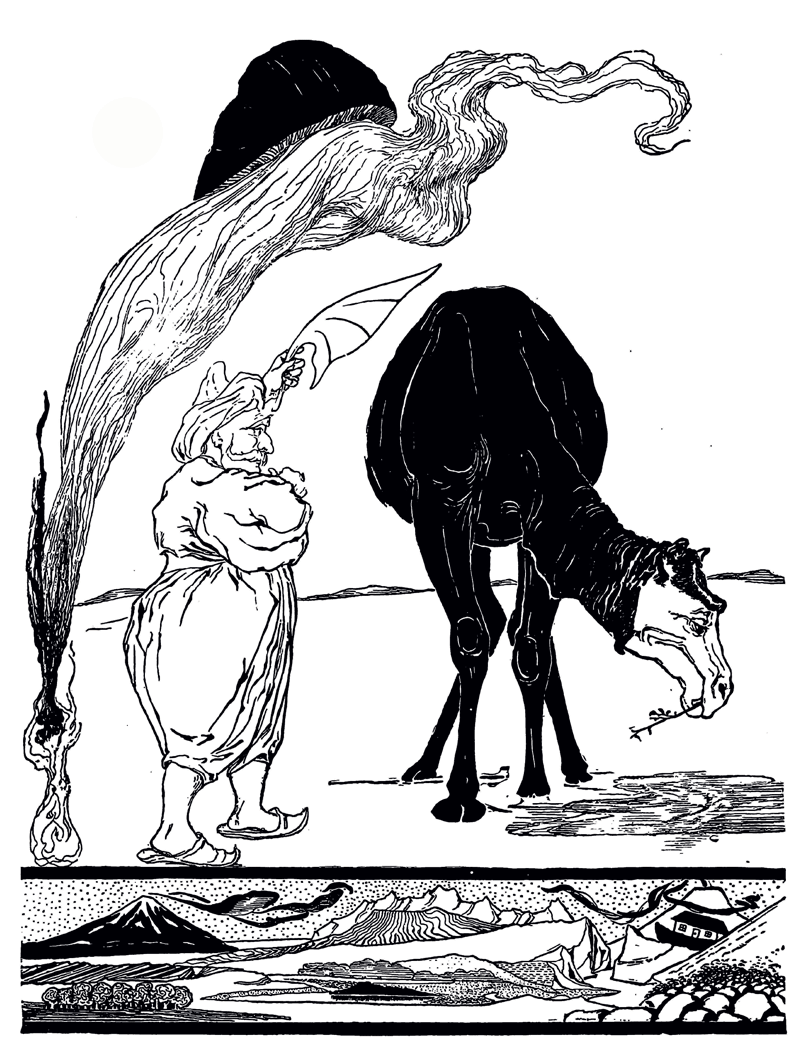 Underneath the truly picture is a picture of the World-so-new-and-all. There are two smoky volcanoes in it, some other mountains and some stones and a lake and a black island and a twisty river and a lot of other things, as well as a Noah’s Ark. I couldn’t draw all the deserts that the Djinn was in charge of, so I only drew one, but it is a most deserty desert.

‘Do you see that?’ said the Djinn. ‘That’s your very own humph that you’ve brought upon your very own self by not working. To-day is Thursday, and you’ve done no work since Monday, when the work began. Now you are going to work.’

‘That’s made a-purpose,’ said the Djinn, ‘all because you missed those three days. You will be able to work now for three days without eating, because you can live on your humph; and don’t you ever say I never did anything for you. Come out of the Desert and go to the Three, and behave. Humph yourself!’

And the Camel humphed himself, humph and all, and went away to join the Three. And from that day to this the Camel always wears a humph (we call it ‘hump’ now, not to hurt his feelings); but he has never yet caught up with the three days that he missed at the beginning of the world, and he has never yet learned how to behave.

THE Camel’s hump is an ugly lump
Which well you may see at the Zoo;
But uglier yet is the hump we get
From having too little to do.

Kiddies and grown-ups too-oo-oo,
If we haven’t enough to do-oo-oo,
We get the hump—
Cameelious hump—
The hump that is black and blue!

We climb out of bed with a frouzly head
And a snarly-yarly voice.
We shiver and scowl and we grunt and we growl
At our bath and our boots and our toys;

And there ought to be a corner for me
(And I know there is one for you)
When we get the hump—
Cameelious hump—
The hump that is black and blue!

The cure for this ill is not to sit still,
Or frowst with a book by the fire;
But to take a large hoe and a shovel also,
And dig till you gently perspire;

And then you will find that the sun and the wind,
And the Djinn of the Garden too,
Have lifted the hump—
The horrible hump—
The hump that is black and blue!

I get it as well as you-oo-oo—
If I haven’t enough to do-oo-oo—
We all get hump—
Cameelious hump—
Kiddies and grown-ups too! 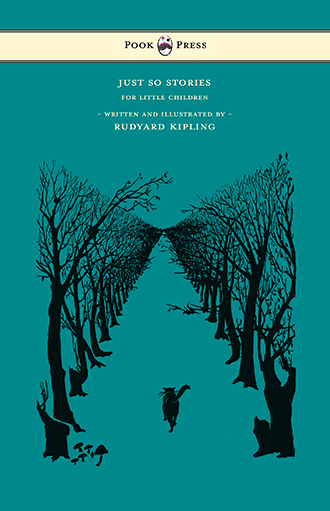